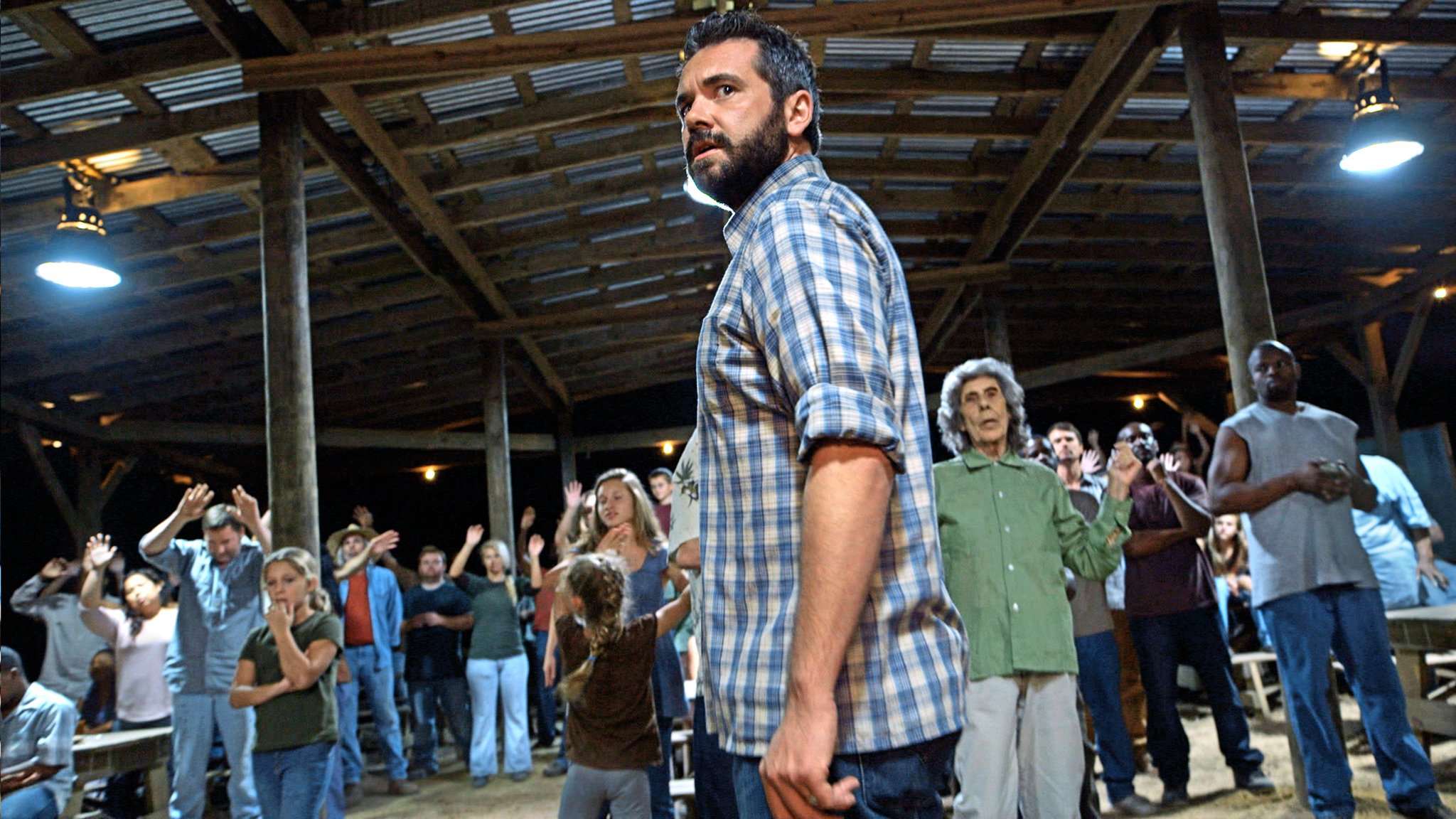 Just when I thought there weren’t any great filmmakers working in horror anymore, Ti West just scared the shit out of me. West busted out on the scene with the moody throwback The House of the Devil showing that he could replicate period aesthetic with ease. His first several films were shot standardly, but for The Sacrament, West dips his toes in the waters of the found footage genre.

To save time — and viewer patience — West establishes the how and why of this found-footage venture immediately. Patrick (Kentucker Audley) and editor Sam (A.J. Bowen) both work at VICE, Patrick found out that his formerly drug-addled sister, Caroline (Amy Seimetz) has left the United States to live at some commune in Latin America. The location is undisclosed and outside visitors aren’t welcome short of invitation, smelling a juicy story, Patrick, Sam and cameraman Jake (Joe Swanberg) set off to figure out exactly what the hell Eden Parish is.

Things don’t start well: as soon as Patrick, Sam and Jake step off the helicopter they are met with men with machine guns. Caroline hastily intervenes on the behalf of her guests, but it’s already apparent to the newcomers that this paradise may not be as it seems. Upon entering Eden Parish, the residents are quick to say how wonderful it is to get away from the pressures and the problems contained therein living in modern America, yet something lingers below the surface.

West wastes no time establishing the unease just waiting to be unleashed on the VICE news team, but he waits until the audience is first introduced to meeting the community’s leader, “Father.” Father (Gene Jones) is a disarming older gentleman, he speaks with a pleasant Southern drawl, and a simultaneous slant against those who disagree with him. Eagle-eye cinephiles will remember Jones as the hapless gas station owner who nearly lost it all against Anton Chigurh, nevertheless, he is completely menacing here.

Sam prides himself on being a good interviewer who can hit his subjects with hard questions, but in full view of all of Father’s supporters, he loses control of the talk. It’s a slow chill that works its way up your spine as you realize that this man holds complete sway over his people, and something very horrible is about to happen. The film avoids the “based on a true story” route that so many found-footage projects have latched onto in recent years.

None of the story will seem new to those familiar with Jim Jones and the massacre that took place in the “utopia” named after him, though that doesn’t stop The Sacrament from scaring audiences for 95 minutes. A thinly fictionalized retelling of Jonestown won’t deliver the gotcha scares that modern audiences are primed for, what you get instead is more frightening. West builds dread that just slowly heightens until the tension is unbearable and then he drops the ending on. You’ll wish that they had never gotten to the payoff at the finale at all.

‘Curse of Chucky’ Confidently Builds a New, Unique Story Within the Franchise Mythos