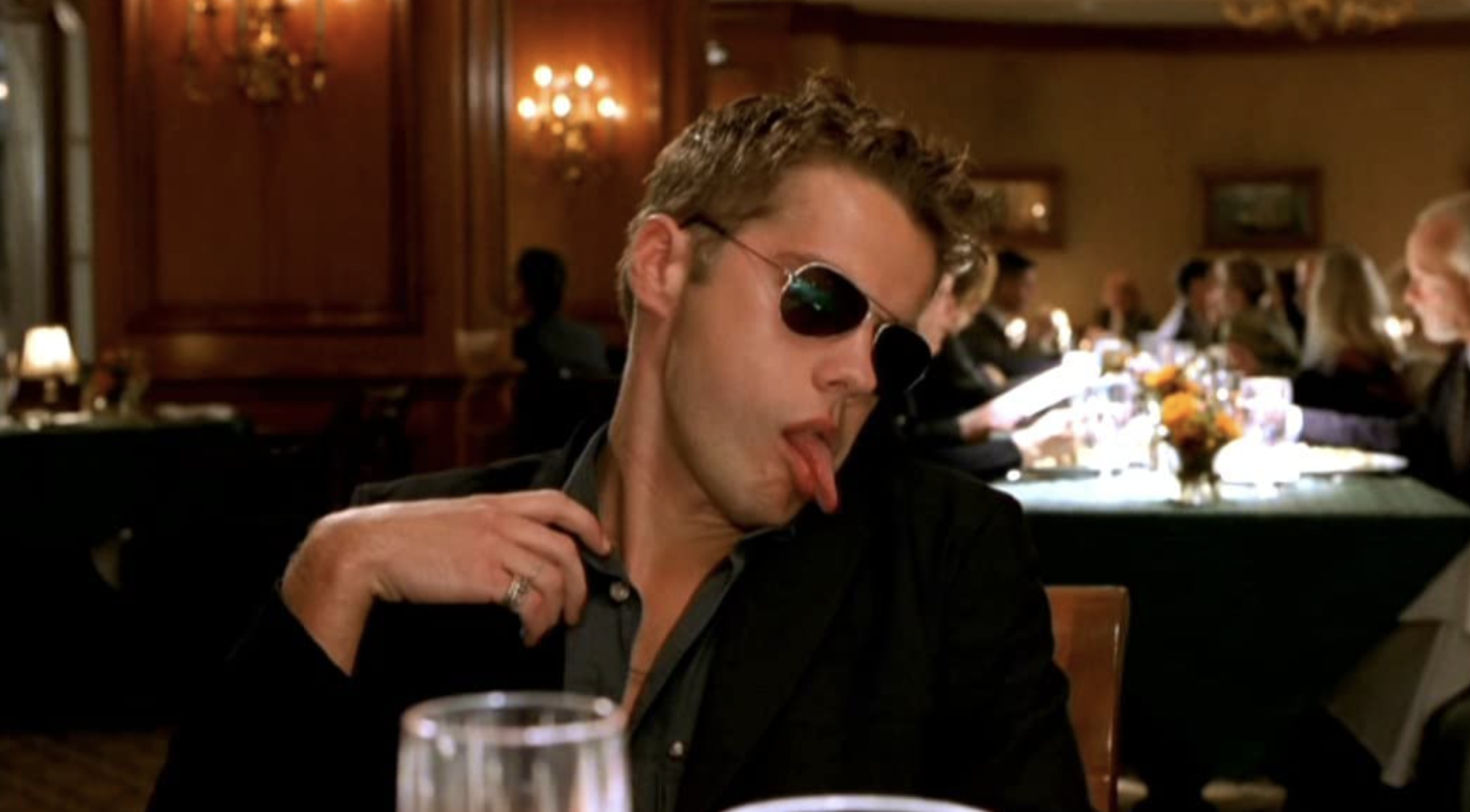 The Rules of Attraction at 20

Mary Harron’s film of Bret Easton Ellis’ novel American Psycho, released in the spring of 2000, attained a certain amount of pop culture currency, while also helping to cement Christian Bale as a leading man. It was a truly brilliant idea to give a feminist slant to such bro-ey material, and I still can’t see or hear any reference to Phil Collins without launching into Patrick Bateman’s “I stress the word… artist” speech.

Two years later came another Ellis adaptation, The Rules of Attraction, which hasn’t quite attained the same respect. Set at a university, the film depicted the “shocking” sex and drug behavior of a bunch of college students around the turn of the millennium. Written and directed by Roger Avary, best known as the co-screenwriter of Pulp Fiction, Rules of Attraction isn’t exactly a classic, but I’ve always enjoyed it, especially a couple of specific scenes. (A third Ellis novel, Less Than Zero, had been adapted back in the late 1980s.)

Like Pulp Fiction, Avary’s Rules of Attraction jumps back and forth in time, beginning the action at a debaucherous “end of the world” party, full of sex, drug use, and the weird-backward-speech trick from Twin Peaks (another thing the two films have in common? Eric Stoltz playing characters named “Lance”). It sets the tone for the rest of the movie, which is full of styles — split-screen, nonlinear storytelling, and fast, fast editing — that were everywhere in that particular era. It also featured some songs — Donovan’s “Colours,” Harry Nilsson’s “Without You” — from the ’60s and early ’70s, fitting with the turn of the millennium’s nostalgia for that period.

We meet the characters- James Van Der Beek, then still on Dawson’s Creek, starred as Sean Bateman, canonically the brother of Ellis’ Patrick Bateman  — although since he’s in college more than 20 years after the events of American Psycho, he must be much younger —and an all-around man whore, and very much the antithesis of his Dawson’s character. I was in college just a couple of years before this time period, but to say my college experience was nothing like this is a big understatement.

Actress of that era Shannyn Sossamon played Lauren, who was in love with Victor (Kip Pardue), a guy studying abroad on a traveling bacchanal that puts the on-campus parties to shame. Ian Somerhalder played Paul, a bisexual man. Familiar faces like Kate Bosworth and Jessica Biel also popped up.

This is not a feel-good movie. There’s maybe one sympathetic character, and she dies in a horrific fashion. There are subplots involving drug dealers, various disputes, and double-crosses, and eventually, the plot doubles back on itself. The film is filled out with an eclectic supporting cast that includes everyone from Fred Savage to Paul Williams to Ron Jeremy. Williams’ brief turn as an ER doctor with atrocious bedside manner is a highlight, and another is Clifton Collins, Jr. as a colorful drug dealer, who uses the word “motherfucker” the second-most times of any Avary-written movie character.

The movie has two especially memorable sequences. The first is a dinner with Paul, his friend/lover Richard, and their snooty mothers (Faye Dunaway and Swoosie Kurtz.) Richard (played by Russell Sams) insisted on being called “Dick,” before making a scene and leaving the dinner table. I’ve been convinced for years that Milo Yiannopoulos saw the movie and lifted his entire persona from “Dick.” The other speeds through Victor’s (Kip Pardue)’s time racing around Europe.

The film was not a major box office performer, although it is believed to have made back its budget, and reviews were mixed. James Van Der Beek didn’t have much of a leading man career afterward, and when his brief movie star run is remembered, it’s usually for Varsity Blues and not this. As for Avary, he has directed just two movies in the years since, although one of them was 2019’s Lucky Day, a pseudo-sequel to his 1993 Killing Zoe.

The Rules of Attraction is streaming in several places for free, including Tubi, Amazon Freevee, and Vudu.

FNC 2022 Dispatch: Novembre, Dead for a Dollar, and Kite Zo A