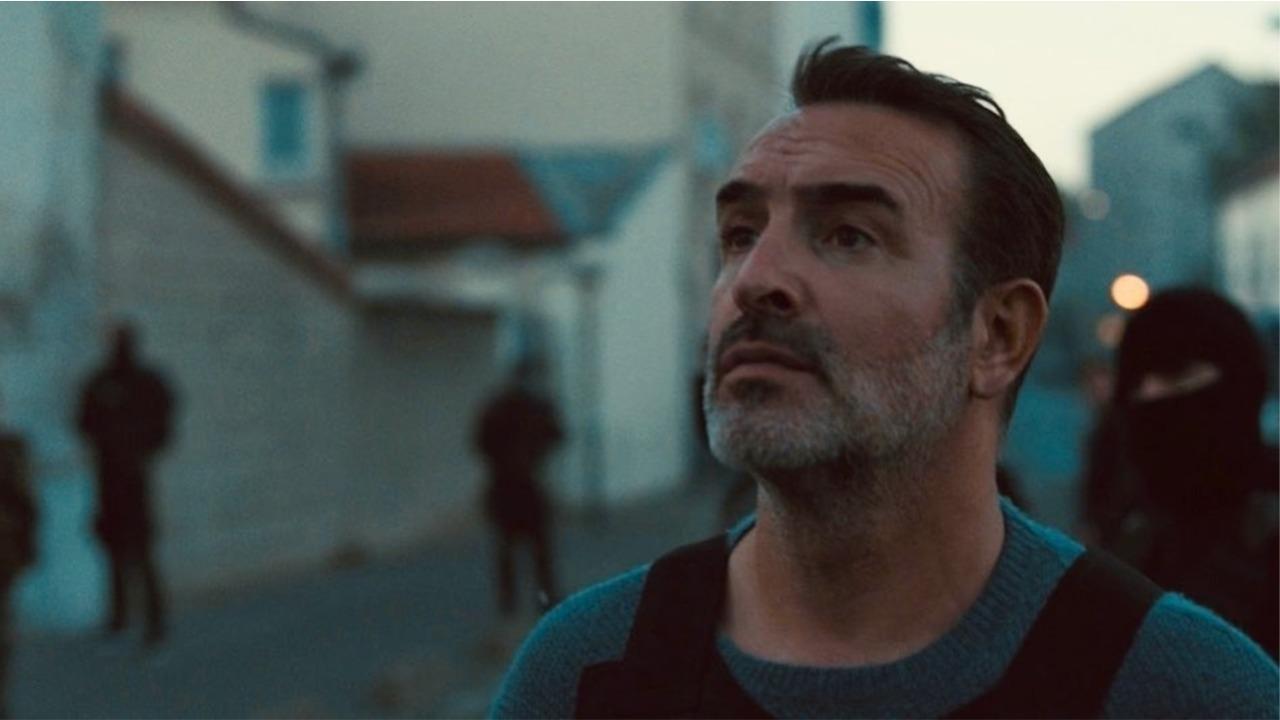 The little details add up together to tell greater tales. Such is the approach taken by director Cédric Jimenez with his latest effort, Novembre. It is a fictionalized retelling of action taken by France’s anti-terrorism unit immediately following the harrowing November 2015 attacks in Paris. Should anyone have forgotten those headlines, on a Friday night coordinated terrorist plots were executed outside a football stadium and inside a popular concert venue, the Bataclan. The death toll rose to 130.

Frenchman Jimenez is no stranger to the hard-nosed procedural and crime cinema, having tackled similar subjects in films like Bac Nord (2020) and La French (2014). Furthermore, Novembre sees the filmmaker reunite with Jean Dujardin, arguably best known to North American audiences for his turn in The Artist. Dujardin plays one of the lead investigators and coordinating forces. The picture co-stars Anaïs Demoustier, Sandrine Kiberlain, and Cédric Kahn as fellow team members, as well as Lyna Khoudri as a key witness who helps authorities ultimately find the culprits.

The name of the game for this movie is momentum. With so much chaos, stress, investigation leads, and so on and so forth, a good director can take all the maddening elements that make up a gobsmacking few days and construct a cogent, rhythmic piece of cinema. No time is wasted, as Novembre opens in, surprise, Athens, where Dujardin’s character assists a local SWAT-like unit bust a terrorist cell. Most of the targets are found and handcuffed, save for one. Lo and behold, panic erupts in Paris while on his flight back home. The suggestion is that it was a coordinated coup and the escapee in Greece was part of the attack on French soil.

From there Jimenez never lets up, getting into sufficient detail to communicate how intricate, exhaustive, stressful, and sleep-depriving the work of such a unit is. Wisely, little time is spent dwelling on the pain suffered by the victims’ loved ones, or France as a whole. This isn’t that kind of movie. An ant-terrorist unit can’t afford to mourn. They must be on the go, 24 hours a day until the job is done. It is very much in the mould of a police procedural.

Any character quirks are revealed through how individuals react to new information coming to light, or how they adapt when a mistake is committed that sets the mission back a step. If that sort of film floats one’s boat, Novembre is a worthy entry in the genre. Bolstered by a propulsive beat that never lets up, it’s 100 minutes inside the world of a specialized, highly sophisticated, astute unit that navigates the rocky waters of terrorist attacks. It’s debatable as to whether the film is “fun,” but it has a purpose and makes no pretenses about the subject matter.

Dead for a Dollar

Just as colleague Stephen Silver saw a screening of Walter Hill’s latest endeavour, Dead for a Dollar, so too did this author at the FNC. The evening itself was bittersweet. The announcement of the FNC lineup and this film was cause for excitement for three reasons. For one, and most obvious, a new Hill film was coming out. Two, the screening was taking place at the beautiful and criminally underused Cinéma Impérial downtown Montreal (which is also serving as HQ for a real estate project at the time of this writing). Three, the festival invited the famed American director to receive a well-deserved career achievement award.

The movie screened, and it was at the Impérial, but Hill had to bow out at the last moment. “Bow” is a poor choice of words. He suffered sciatica back pain which kept him in bed for a few days. We wish him as swift a recovery as possible.

Dead for a Dollar is a turn of the 20th century western starring Christoph Waltz and Willem Dafoe as rivals. The former is a bounty hunter, and the latter a reputable robber and occasional killer. Their paths cross once again through a circuitous plot involving an English teacher (Rachel Brosnahan) who has run off to Mexico with, heaven forbid, a Black man (Elijah Jones). The teacher’s husband (Hamish Linklater), tasks Waltz’s hunter to bring his woman back, and so off he goes with a new partner (Warren Burke). Benjamin Bratt co-stars as a Mexican gang leader.

Reading Silver’s review carefully, there isn’t a whole lot that can be added. In fact, most of what he wrote is echoed in how this writer felt whilst attending the projection. Dafoe is gleeful and charming in his own peculiar way as a ne’re-do-well. Early in the picture, his character argues directly to Waltz’s face that he never killed anyone who didn’t threaten him first. Funnily enough, his character’s journey throughout the film very much supports said claim. He isn’t a very nice person, yet worse trouble seems to follow him wherever he goes, resulting in inevitable gun smoke and bloodshed. Christoph Waltz certainly has a great face to play a hard-edged, seasoned cowboy. His stature and posture don’t hold as much gravitas for the role, but he’s far too good an actor to let the part go to waste.

The film is replete with interesting ideas. Brosnahan’s character is a bold, confident spirit who gets herself into her own version of trouble (her lover is a former student), but always on her terms. An interesting dynamic permeates between Burke and Jones, who play two Black characters on opposite sides of the adventure trying to reason with one another. Ultimately, Dead for a Dollar is too flat. For one, the picture’s digital photography is awash in a distracting and especially unpleasant brown-yellowish hue. For a film that supposedly harkens back to B-movies of the 50s, it looks nothing like it. Second, Hill’s directing is just a bit off. The editing, the pacing, the blocking, the angles, it’s missing a special touch. Nothing is outright bad, but none of it is noteworthy either. The actors and characters are more interesting than the directorial wand guiding them.

Kite Zo A (Leave the Bones)

When attending a film festival, there are many ways one can go about it. Some people adore being among the first to see a big, anticipated film that’s released shortly thereafter. Others stick to certain categories of movies or pin down the date when their preferred filmmaker’s latest effort will be shown. By the same token, one can simply go with the flow and grab a ticket for something that sounds vaguely interesting, stroll into the theatre room not knowing exactly what they’ve gotten themselves into and let the film carry them away. That’s when a film like Kite Zo A comes into play, the title which is Haitian patois for “leave the bones.”

For his second feature film and first documentary, Montreal-born Kaveh Nabatian takes viewers to the island of Haiti. There, for a spellbinding 68 minutes, Nabatian’s camera soaks in the sights and, more importantly, sounds of local music and how it means different things to different people. Explaining Kite Zo A is somewhat challenging. There is a little bit of street poetry, a few brief snippets of talking head interviews (but very few. That typical documentary style is not the focus here), and a lot of beautifully choreographed, expertly shot song and dance numbers. It’s like a music video that lasts for over an hour, one that carries itself with an unabashed love of the culture, or cultures, it’s highlighting.

What narration accompanies the visuals is not of the traditional sort, what with a voice describing what’s on screen or offering supplemental details. No, in the case of Kite Zo A, it’s a form of elegiac poetry written and read by Wood-Jerry Gabriel, a local artist. The spiritually and emotionally charged words paint a picture of the country’s history and current standing. Impressively, it isn’t done in a didactic sort of way. It feels fresh and honest, like a religious text infused with equal measures of love and sorrow.

As for the music, it’s extremely difficult to not like. Infectious, rhythmic, joyous, enchanting, and dance-worthy, there is enough variety for just about everyone. Some music tells the story of supernatural beings who protect the Haitian people, some of it is fit for evening celebrations, and some of it is to go completely wild during Mardi Gras. Oftentimes the film’s momentum is halted when new music booms to showcase a strange, fascinating dance number. Rather than hurt the film, it does the opposite. It’s another opportunity to learn and, in some small measure, understand what Haitian music is like and the stories it tells. The film also looks gorgeous. Wonderful grain impregnates the picture, and the composition is beautiful. At the risk of exaggerating, the cinematic, docu-style beauty captured suggests a touch of Terrence Malick.

It’s tempting to conclude the review with “this is the best movie of 2022!” but so few people will ever see it that the gesture risks coming across as forced. If you can, somehow or someway, see it, it’s very much worth your time.

The Rules of Attraction: A Wild, Speedy Tale of College and Debauchery

All the Beauty and the Bloodshed: The Pain Behind Art