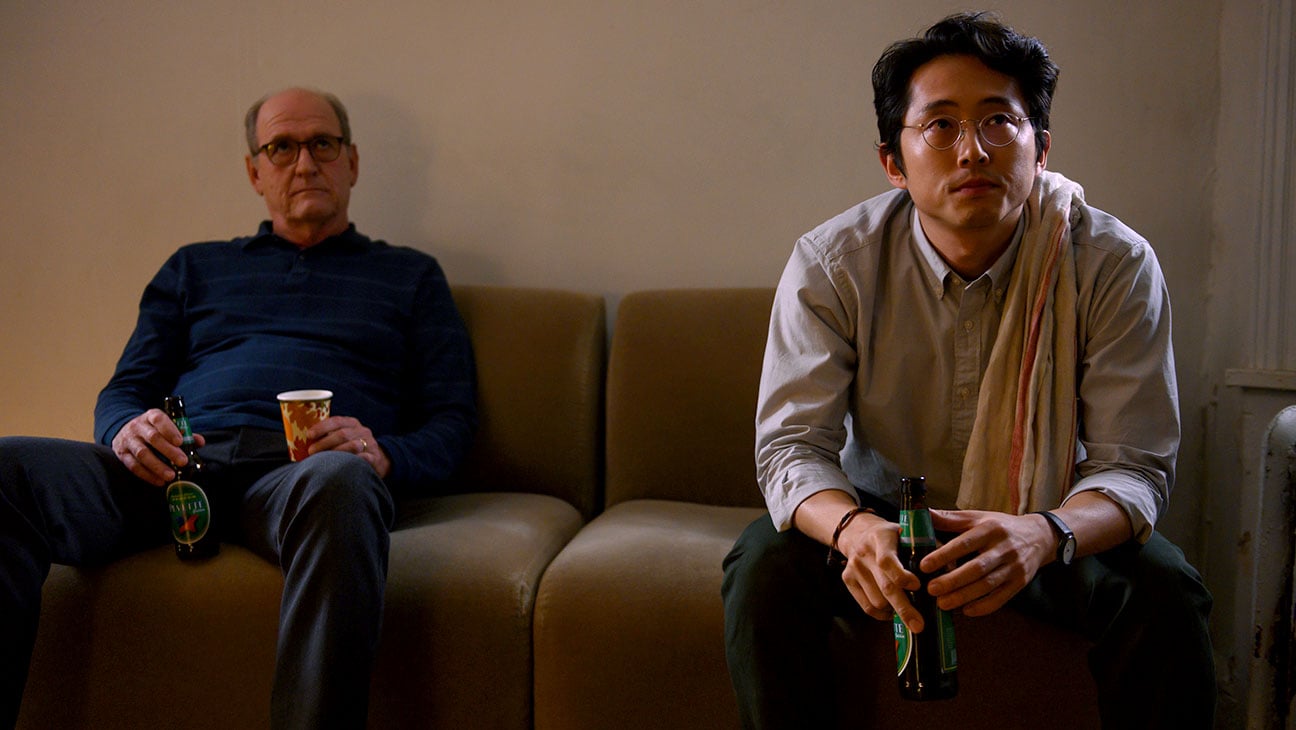 If you lived in New York City in your 20s without much money, there’s a good chance you lived in an apartment kind of like the one in The Humans.

Sure, it’s got plenty of space, but that’s something that requires certain compromises. Like narrow hallways, and a lack of natural light, and thin walls, and frequent loud noises, and walls that are covered by weird, moving lumps and bizarre discolorations. Watching it, we’re wondering if we should be more worried about a ghost, an exploding pipe, or possibly both.

That’s the multilevel apartment occupied by Brigid (Beanie Feldstein) and her boyfriend Richard (Steven Yeun), a couple that moved together into this Chinatown apartment so recently that it’s barely furnished yet. For Thanksgiving, they’re visited by Brigid’s parents (Richard Jenkins and Jayne Houdyshell), along with her sister (Amy Schumer) and dementia-addled grandmother (June Squibb.)

Throughout the night, secrets are exposed, longtime family fissures are deepened, and everybody gets more and more frustrated by the apartment’s strange noises and outages. We’re meant to keep wondering if something supernatural is about to happen.

Sure, movies about a dysfunctional family gathering at Thanksgiving and secrets pouring out are practically a dime a dozen. But this time, in a brilliant touch, the apartment they’re in is even more dysfunctional than the family.

The Humans, which showed at the Philadelphia Film Festival this week and will have a rare simultaneous release in theaters and on Showtime, is based on a Tony-winning Broadway play written by Stephen Karam. Karam also wrote and directed the movie, and when a play is adapted by its own playwright, especially one who’s a first-time movie director, it often feels like a filmed play. The Humans absolutely does not- in fact, it feels like a horror movie, in that the set is practically the movie’s main character.

Houdyshell, the one member of the cast who played the part on Broadway and won a Tony for it, is the heart of this, playing a character who’s like a non-Italian Livia Soprano, while Squibb plays her role mostly silently, aside from the occasional outburst. Yeun gives a subdued performance as a nervous boyfriend, while Feldstein — currently seen playing Monica Lewinsky on American Crime Story — displays fantastic passive-aggressiveness. Jenkins is solid as usual.

But the real surprise is Amy Schumer, a counterintuitive casting choice but certainly the right one. Schumer’s brief run as a movie star is long past, but she shows here that she’s got quite a lot of potential as a dramatic character actress.

One strange aspect is that while the daughters are played by Feldstein and Schumer, and there’s an overarching, familiar sense of New York City neuroticism, these characters aren’t Jews- in fact, most of them are established as believing Christians, who pray, talk about church, and gift each other Jesus statues. Feldstein might be the least-convincing on-screen gentile since George Costanza’s parents.

That religious incongruity is just one more thing that’s off-kilter about this wonderfully uncomfortable movie.

The Humans is an A24 movie, continuing their recent run of good bets, although another A24 film that I saw at PFF right afterward, C’mon C’mon, was much worse. The Humans will debut on Showtime, of all places, on November 24, although it’s also getting a theatrical release.

One final note: Scott Rudin, the longtime Hollywood producer who went down earlier this year in a staff-abuse scandal, was originally a producer of The Humans before his name was removed. I think a good punishment for his misdeeds might be a lifetime of living in the apartment from the movie, with the most toxic family imaginable.

Last Night in Soho Devolves into a Boilerplate Murder Mystery