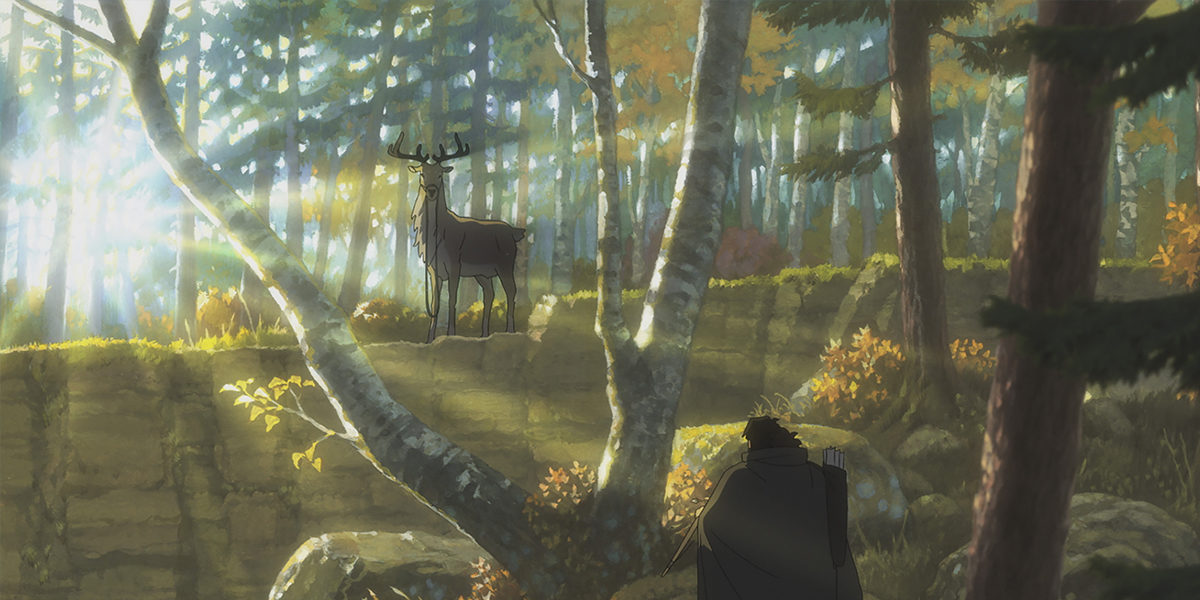 “I did not defeat it. The disease still lives within me. Or rather, the disease may be what is keeping me alive.”

The fantasy novel series written by Nahoko Uehashi, The Deer King, is brought to vibrant life by Production I.G, the production company behind Ghost In The Shell. A deadly Black Wolf Disease is sweeping across a land only recently ravaged by war. There are two main peoples, the Zolian empire and the Aquafaese, and for some reason this affliction only affects Zol. We follow the story of survival of two of the only people to survive the disease; former soldier Van and a little girl named Yuna.

The Deer King is a tale of survival, but also one of political intrigue. Van’s journey from valiant warrior, to slave, then back out into the world as a survivor caring for the little girl is incredibly captivating. But the political side of things doesn’t slouch one bit. There’s layers to the Aquafaese and the Zol, not just a hierarchy but also a certain way they interact, certain public expectations. The world feels rich and full, and following Van’s way up through it really does tug at the old heartstrings.

It’s believed Van, who survives the onslaught of these supernatural dogs, possesses the key to cure the ‘disease’ spreading across the lands and wiping out a large amount of the population. Hossal, the expert doctor who has been in charge of surveying those who have died from the cursed disease known as ‘mittsual’, as well as Sae, a tracker sent to hunt down Van, end up banding together with him to search for answers.

Hossal’s attempts at finding a cure, coupled with his analysis of the curse in medical terms, really adds an interesting spin to things. The idea of diseases only affecting certain countries or peoples does have historical roots, with some nations believing the black plague wouldn’t harm their population. This is where things stand to start, but finding the curse being of supernatural origin rather than medical shakes the faithful people up.

I’m left wanting more of The Deer King, needing to dive deeper into this world and see where each character’s paths take them. The different sights and cultures, all of the small towns and beautiful forests and grasslands the film takes us through, as well as the thriving wildlife coexisting in those places, it’s just so easy to fall right in and become immersed. I can see a sequel in the future taking us through more of the novels it’s based on, and I really hope we get more from this world.

“Of all the people I have worked with, nobody else provides the unique sensation he does.”

Satoshi Kon, the Illusionist, guides us through the incredible works of the master filmmaker himself and gives insight into how things were made as well as the creative person Kon was. The documentary takes us not only across Japan but overseas and particularly to France, covering Satoshi Kon’s massive influence and going into careful detail about the adaptations of his work. We jump around quite a bit, however, Kon’s story pieces together and forms the full image. From his young days of admiring manga, especially Akira, to beginning to create his own and finding success through sci-fi and an immersive sense of fantasy, then out into superstar territory on the big screen.

Other high-profile creators in the industry really do highlight just how influential Kon was. He brought the power of live-action film, along with the freedom of animation, together in a medium-defining way. His influence runs through the veins of both animation and live-action cinema, including films like Black Swan and Inception in the West. Despite tragically passing whilst only 46, and only having a relatively small body of work, the lasting impression Satoshi Kon has left will burn through generations.

The works Satoshi Kon brought to life really do perfectly fit with his style and his prowess. Paprika and Perfect Blue for example mix hard reality with this fantastic and terrifying surrealism, the two are immersive novels that become even more vibrant and lively on the screen in Kon’s hands. Finding out his mindset on his films and the creation of his movies is incredibly interesting, things such as him channeling his own self into his characters, including Mima from Perfect Blue and her endless torture. These sorts of things really put a new framing on his incredible works.

Satoshi Kon really is an all-time great, an incredible mind who was taken from us far too soon. His contribution to not just animation, but also to surrealist filmmaking and unsettling media, will echo throughout cinema far into the future.