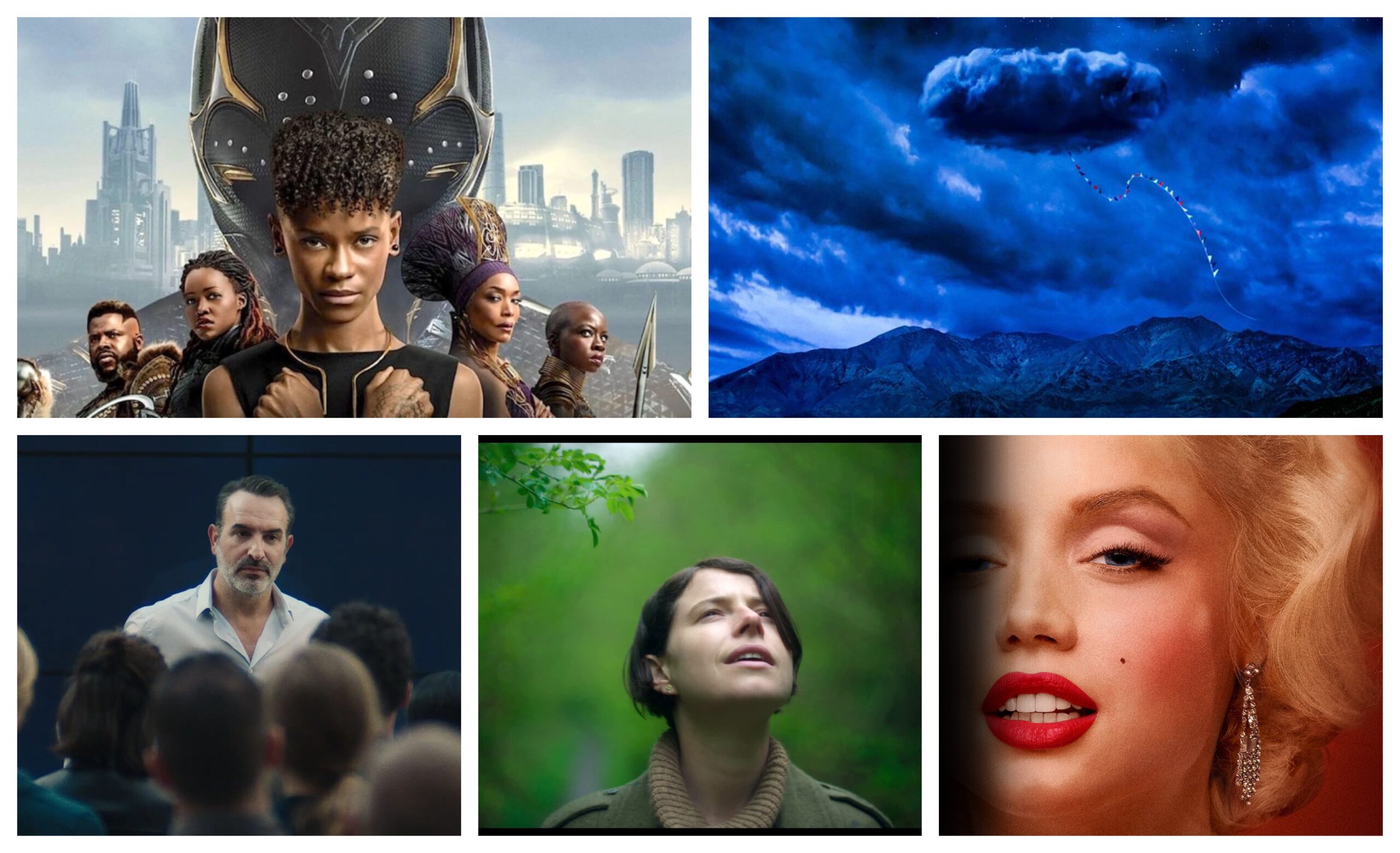 A few days ago Tilt Magazine shared an extensive list of the best movie posters released in 2022. We’re back, this time to highlight 10 movie trailers revealed during the calendar year that exemplified imagination, creativity, and boldness.

The conversation surrounding trailers is similar to that regarding posters. A visit to the local multiplex to see the latest movie commences with what feels like an increasing number of advertisements for upcoming releases. As such, anyone with an interest in that format of marketing and moderately competent perception skills will notice some obvious trends. Since it’s the holiday season and in the spirit of giving, we’ll offer a free lane to our colleagues at Cinema Blend for an easy slam dunk. Four years ago, they wrote an article about movie trailer trends they had grown tired of. It’s now 2002 and much that’s highlighted in that article remains pervasive.

A slow cover of a pop song, a slow cover of a franchise’s orchestral theme, smash-cutting to text, giving away jump scares, the infamous and booming Hans Zimmer horn, etc. If anything, the editing style of these two or two-and-a-half-minute-long previews displays increased vim and verve, making one wonder if they were stitched together on performance enhancing drugs.

But today’s article is not intended to tear movie trailers down but rather to praise them. Much like with the posters project, this one required a lot of sifting through advertisements that had potential but ultimately did little, or not enough, to dispel monotony. Some of the ads shared below truly think outside the box because of the stories the films tell. Others require additional argumentation on our part because their idiosyncrasies are subtler, showing sneaky artistic skill.

Of all the trailers on our list, this one may be the most straightforward and least inventive. On the flip side, it has the difficult task of convincing the public to see a quaint, quirky little Welsh comedy about a man who makes a sentient robot. God knows how many films about robots already exist, but this one is of the low-budget, sentimental comedy variety. While lacking in inventiveness, it fully embraces the movie’s lighthearted, oddball tone. As a creator, the protagonist operates a little off the beaten path and the advert plays that up to the nines. One can argue that too many gags are spoiled, but the tone is far too charming and bizarre to ignore.

Another trailer that borrows from the tested playbook by using a haunting version of a Monroe tune, Blonde’s teaser sets the record straight about the tone Andrew Dominik’s picture adopts. With its stark black and white photography, the brief preview provides a harsh snapshot of the fluffy public persona Marilyn Monroe sported and her innermost private moments. Like all good teasers, audiences are promised an important plot point: who needs to show up to cheer up the teary Marilyn?

The trailer for Cédric Jimenez’s latest offering is just as intense as the movie itself. A fictional retelling of the November 2015 terrorist attacks in Paris, the 2 ½ minute-long preview tosses viewers into the deep end. Tension, confusion, and the maddening operation that was the tracking down of the culprits are all expertly communicated. In a clever move, the trailer shares a poignant line of dialogue delivered by Jean Dujardin’s character, who invites whichever officers are not emotionally ready to do the job to head home. The ad seems to be providing that very warning to viewers who may find the subject matter heavy.

A film similar to one reviewed recently here at Tilt, Cow is the story of, well, the eponymous animal. Always marching to the beat of her own drum, director Andrea Arnold concentrates on the life of one specific cow. The trailer almost plays like comedy for anyone not expecting the filmmakers to take the subject matter as seriously as they do. As cheeky as the project sounds, the reality is that the trailer provides audiences with a solid foundation of what the feature-length film is about. Moreover, the 1 minute and 44 seconds tell their own little story about a mother losing their calf to the needs and whims of the farm the baby was born on.

The teaser to one of the fall’s highlight horror flicks does a few things expertly well. First, it tells its own story in a succinct, clear manner. But it also operates on a meta-level. It’s well known at this point that Zach Cregger’s picture has a few key surprises up its sleeve. This advert suggests that there is indeed much more to the story than what’s presented without ever divulging the film’s dirty secrets. Finally, it sends viewers into a tailspin by pretending Barbarian may be a romance story before taking a hard right midway through.

Rian Johnson’s sequel to his own 2019 hit Knives Out allowed itself to have fun with its marketing. The first film was a roaring success, certainly by mid-budget murder mystery standards. As such, the burgeoning franchise could now express itself through the prism of the identity Johnsons infused it with. As far as content is concerned, the Glass Onion teaser trailer does little more than announce its imminent release. Oh, but what fun it has to do so. Snappy music and editing, the revelation of another impressively diverse cast, and some great lines from Daniel Craig. The coup de grâce is the emphasis on the puzzle-solving angle. Not only will Benoit Blanc have a mystery to uncover, but so too will the audience.

Ryan Coogler’s sequel to the 2018 mega-hit Black Panther was one of 2022’s most anticipated films. The original was tremendously well received, earned stupendous box office recognition, and coveted Oscar glory. Then came bewildering tragedy in 2020, sending the sequel into a creative tailspin. What would the movie be like without Chadwick Boseman? This created unusual anticipation for the teaser trailer released in the summer. The result, which incidentally borrows one of the tired trends referenced in the article linked above, is a touching, graceful hint at the emotionally taxing episode the recurring characters face.

Let it be known that A24, the studio behind a plethora of brilliant independent horror films, knows how to market its forthcoming projects. A debate can be had about the merits or lack thereof of Alex Garland’s Men, but few who witnessed its teaser weren’t left intrigued. It artistically lifts from what may be the film’s seminal scene, with the protagonist creating echoes with her voice in a lonely countryside tunnel. Said echoes reverberate throughout the trailer, seemingly awakening the supernatural forces that will haunt her. It ends with what also might be considered the movie’s strongest moment.

Todd Field’s picture promises tension and eeriness with a story about an accomplished orchestra composer and conductor (Cate Blanchett) experiencing psychological turmoil. At first glance, the trailer appears to serve its purpose as so many others do for thrillers. It starts slow, eventually accelerating the visual montage with an aural onslaught. Camouflaged cleverness is at play. The opening third plays out just a bit longer than one might expect, with a Q&A host verbosely introducing the titular maestro. The trailer suggests that the protagonist is particularly sensitive to sound, as any sound can be considered musical in some capacity. Cue bold editing from eerie, non-diegetic sounds to revelations of the very ordinary things producing them as tense instrumental notes howl.

At this stage, audiences should have an idea of what to expect from writer-director Jordan Peele. In a nutshell, to expect the unexpected. However much they vary in quality, they are all unique, idiosyncratic pieces of work. Get Out announced his arrival on the scene as a director, Us revealed that he wasn’t a one-trick pony, so people waited with bated breath for Nope. Its teaser trailer didn’t disappoint. With a brief introduction of the characters and their world, viewers are quickly shown that something about the land where their ranch is situated is askew. What? We don’t know. The icing on the cake is the classy way in which Jordan Peel’s credit scrolls into the picture. The film, as much as Jordan Peele’s brand, is advertised.

Avatar: The Way of Water is a World of Wonders

The Poseidon Adventure at 50: A Hope and a Prayer