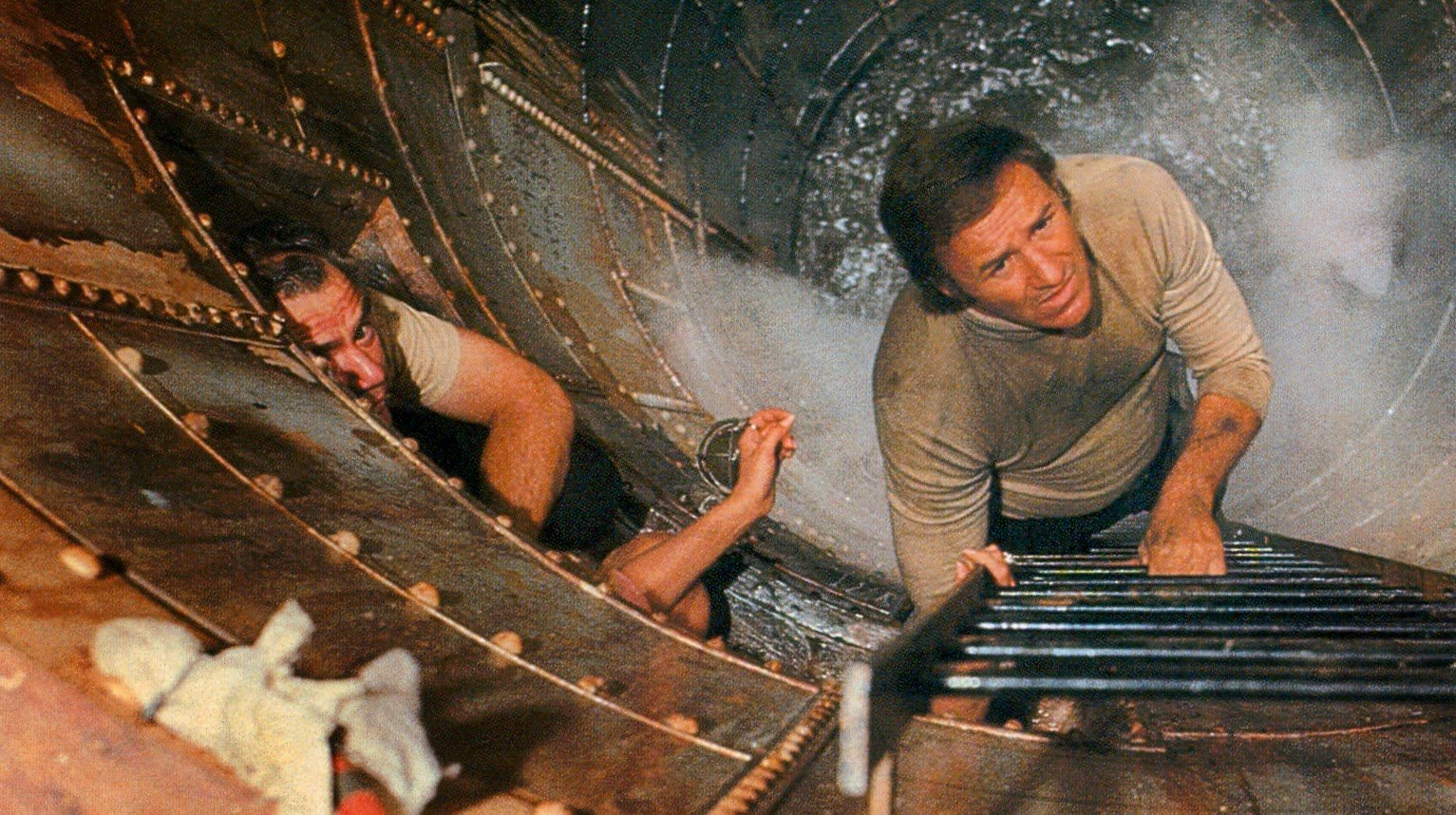 The Poseidon Adventure at 50: A Retrospective

When life is boiled down to its essentials, what drives the individual? What are the ideas, aspirations, and above all else, beliefs that make a person who they are? Typically, that’s discovered when the going gets tough, be it because of societal hardship, financial struggles, or for a matter of life and death. Those are the situations that test humanity’s proverbial metal like no other. Why push forward, and why concede defeat? The answer is often: for each other. Such is the extraordinarily taxing episode lived by the protagonists in The Poseidon Adventure, which turns 50 this week.

The disaster film subgenre saw a boom in Hollywood during the 1970s, thanks in large part to the efforts of producer Irwin Allen at the studio known then as 20th Century Fox. He earned the nickname “The Master of Disaster.” Not only was he the thrusting force behind getting Paul Gallico’s novel of the same name transposed to the silver screen, but 1974’s The Towering Inferno as well. The hiring of British director Ronald Neame ended up being a key component as to why The Poseidon Adventure resonates to this day. Fox wanted a filmmaker with a more sophisticated appreciation for drama and character than what they argued Allen typically brought to his projects.

If Allen and Neame represented the driving force behind the camera, then Gene Hackman was the equivalent in front of the lens. The Hollywood legend plays Reverend Frank Scott. Anyone who has seen Hackman’s lauded performances in The French Connection, The Conversation, Mississippi Burning, or Crimson Tide might find it odd that he should be playing a devout man of God. The script has a trick or two up its sleeve, for Reverend Scott is not your ordinary sermon giver. As evidenced in one of the film’s earlier scenes before disaster strikes, Scott takes the unbeaten path when spreading the good word. He’s fiery but in a profoundly and spiritually positive sense. He wants people to be both mentally and emotionally strong, very, in fact. God gave us life, and it’s far too precious a gift to squander by wallowing in pity and doubt.

At first, this seems like a decent, if unspectacular, attempt to toss a monkey wrench into the plot’s machinations. It soon becomes apparent that Scott’s fervour for life, and his determination to channel not only his own inner strength but that of others, are, in large part, what will help the motley group make it out alive. The eclectic band of desperate cruise ship patrons is Detective Lieutenant Mike Rogo (Ernest Borgnine), his wife Linda (Stella Stevens), musician Nonnie (Carol Lynley), elderly couple Belle and Manny Rosen (Shelley Winters and Jack Albertson), brother and sister Susan and Robin Shelby (Pamela Sue Martin and Eric Shea), crew member Acres (Roddy McDowall), and bachelor James Martin (Red Buttons).

A Leader and their Apostles

It’s obvious that the endgame for all these characters is survival. What makes The Poseidon Adventure a compelling yarn is how they get through the ordeal with Reverend Scott as their sherpa. Not everyone takes kindly to the preacher’s feisty persona. Detective Rogo is a curmudgeonly figure who regularly questions Scott’s leadership and decision-making. That may be because, typically, the alfa wherever he goes, Rogo is suddenly confronted by another person more manly than he.

Another explanation may find its sources in themes that run through many religious texts. At the risk of coming off as too self-important for a movie retrospective, the relationship between the Reverend and the others is akin to that between an important religious figure and their followers, such as Jesus Christ. Out of the blue comes someone who speaks intelligently but in stark contrast to what everyone else is saying. Even the other priest on the ship does not share Scott’s overly enthusiastic methods, although they remain on friendly terms.

In one of the picture’s key moments, after the Poseidon has been toppled over and its passengers are ensconced in the ballroom, one of its officers argues they should stay put and await rescue. Scott begs to differ, fiercely so. Acres, of one its crew members, may know his way around just well enough to get to a particular section of the hull where the steel is less thick, offering them a chance to pierce through, thus freeing them. A verbal jousting match commences between a man who cautions patience while a ship sinks and another who dares to go into the unknown caverns of the vessel’s interior. As with the story found in the Bible, not many people choose to follow this new personality who goes against the grain.

It goes without saying that Reverend Scott is the most important figure in The Poseidon Adventure. That’s not to say that none of the other characters are important or interesting. The cast is uniformly strong and diverse in its interpretations. The point being made is that much like in the case of an influential theological figure, all the other survivors feed off of his courage. It may take time, and some members of the group will be skeptical at first (Detective Rogo), but ultimately, they see the way.

The hopeful survivors also feed off each other’s strength. At several points, Shelley Winters’ Bella is ready to give up. She’s old, plump, and believes to be lacking the stamina to get past many of the hurdles faced. Her husband Manny keeps tapping into what little reserves of hope still linger in her soul. A similar situation arises between two people who had never seen each other prior to boarding the Poseidon, James Martin and Nonnie. The latter loses her brother in the destruction of the wave’s attack. Her psychological state is in tatters, but James Martin, a perpetual loner, somehow gets through to her and ensures she never gives up either.

Scott’s presence, vim, and verve spill over to the people he guides. It happens in different doses and manners. That is, ostensibly, what a good preacher should do. Those concerned see a guiding light and make with that what they must or feel they should.

The Poseidon Adventure was a box office smash and, just as if not more impressive, earned multiple Academy Award nominations. Eight, to be exact, winning two. Few disaster flicks earn the reputation that Ronald Neame’s picture has. Then again, not many of them develop their characters with the same level of care. It says a lot that Winters was a Best Actress in a Supporting Role nominee.

Unsurprisingly, the special effects and set design are striking and befitting of a blockbuster. Beyond the pyrotechnics and convincingly tattered cruise ship design is a story of resilience. When all seems lost, people can fight through the odds. Some just need a bit of guidance and a little push to find either hope or a prayer.

The Best Movie Trailers of 2022