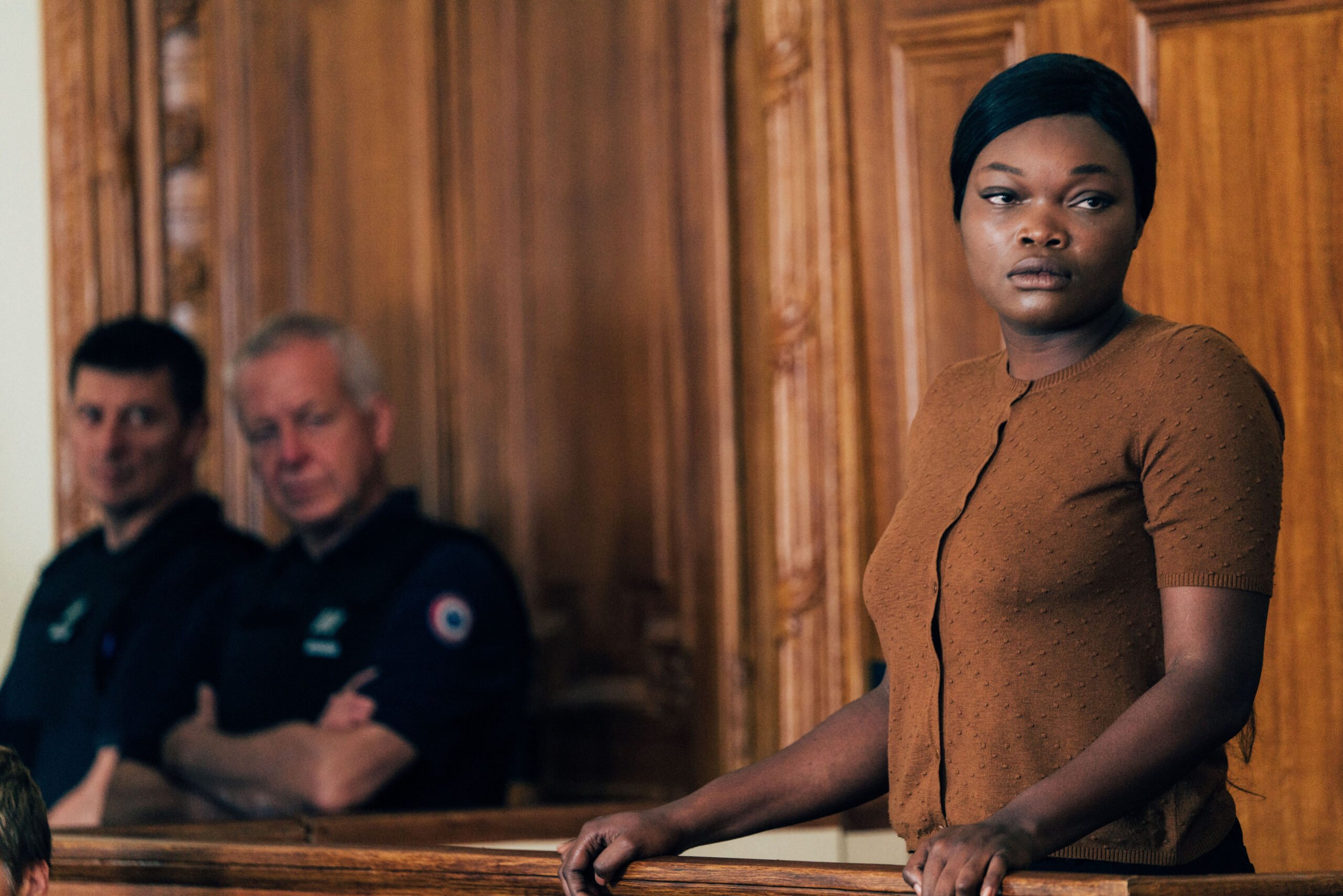 When Laurence Coly (Guslagie Malanda) first enters the courtroom, she strides to the defendant’s stand with weary confidence. The Senegalese immigrant’s wrists are bound behind her back in handcuffs which attach to a short leash held by a gendarmerie. The lush wood paneling of the courtroom in the small conservative town implies the proceedings carry the grandeur of France’s justice system. Looking on is Rama (Kayije Kagame), an academic studying the case who begins to see more and more of herself in Laurence as the details of why she killed her infant are revealed.

The most tragic aspect of Alice Diop’s stunning courtroom drama Saint Omer is that it’s based on a true story. Like Rama, Diop found herself in the story of a Senegalese woman who stood trial for the murder of her infant child. Not only is she drawing from a true story, she’s drawing from personal experience. This real-life connection makes perfect sense for a director who previously worked in the documentary medium and whose most recent feature We peered into the African immigrant experience in Paris.

Diop is well-equipped to examine the clash of Western sensibilities against other cultures. She deftly conveys the complexities of a black female character whose narrative may appear to be that of a cut-and-dry Medea-like figure without the empathetic lens Diop provides. Her storytelling chops have gracefully translated to her first feature-length fiction effort, which has justifiably been selected as France’s submission to this year’s Academy Awards.

Laurence is on trial not only for her baby’s death but also being an African woman in France. After arriving as a student she changed her concentration from law to philosophy against her father’s wishes. As a result, he cut her off financially, forcing her to drop out and make it on her own on a foreign continent. Back home, she’s ostracized for living in Europe and not being a “true” African. During her trial, the prosecution argues that she claims western values but speaks of spirits and the supernatural. They also feel the need to underscore how eloquently she speaks. Like many immigrants, she struggles with a sense of belonging.

As Laurence’s defense attorney states in a stunning to-camera appeal, this is the story of a phantom woman. She’s alone; without the support of her family and living as a secret, hidden by the white father of her child. Her solitude is both emotional and geographical.

One of the more stunning qualities of Diop’s film is the gravity she creates through silence. Her selective sound design focuses on breath. The consistent rhythm of inhaling to exhaling creates a hypnotic rhythm that pulls you deep into the drama of the scene, reminding you of the real human stakes unfolding before you.

That accentuated breathing is perhaps a service provided by Diop as a reminder of the body’s essential requirements. Each volley of questions and answers during the courtroom testimony grips you tighter and tighter. Only when Diop mercifully chooses to break the tension do you realize your lungs have been flattened, deprived of air during the entire exchange. The incongruity of Western focus on science and African spiritualism is at the heart of Laurence’s case. Was she cursed? Does that make her insane? Diop suggests there is an arrogance to the Western culture, namely its justice system and the idea that everything can be explained. Even if she did abandon her child on a beach to be carried away by the tide, is she really the one responsible, given her circumstances? And if she is convicted and punished, will justice really be served? Can we forgive our mothers for faults they had no control over? These are the haunting questions you take with you once the credits of Saint Omer roll.

All the Hellraiser Movies Ranked Worst To Best