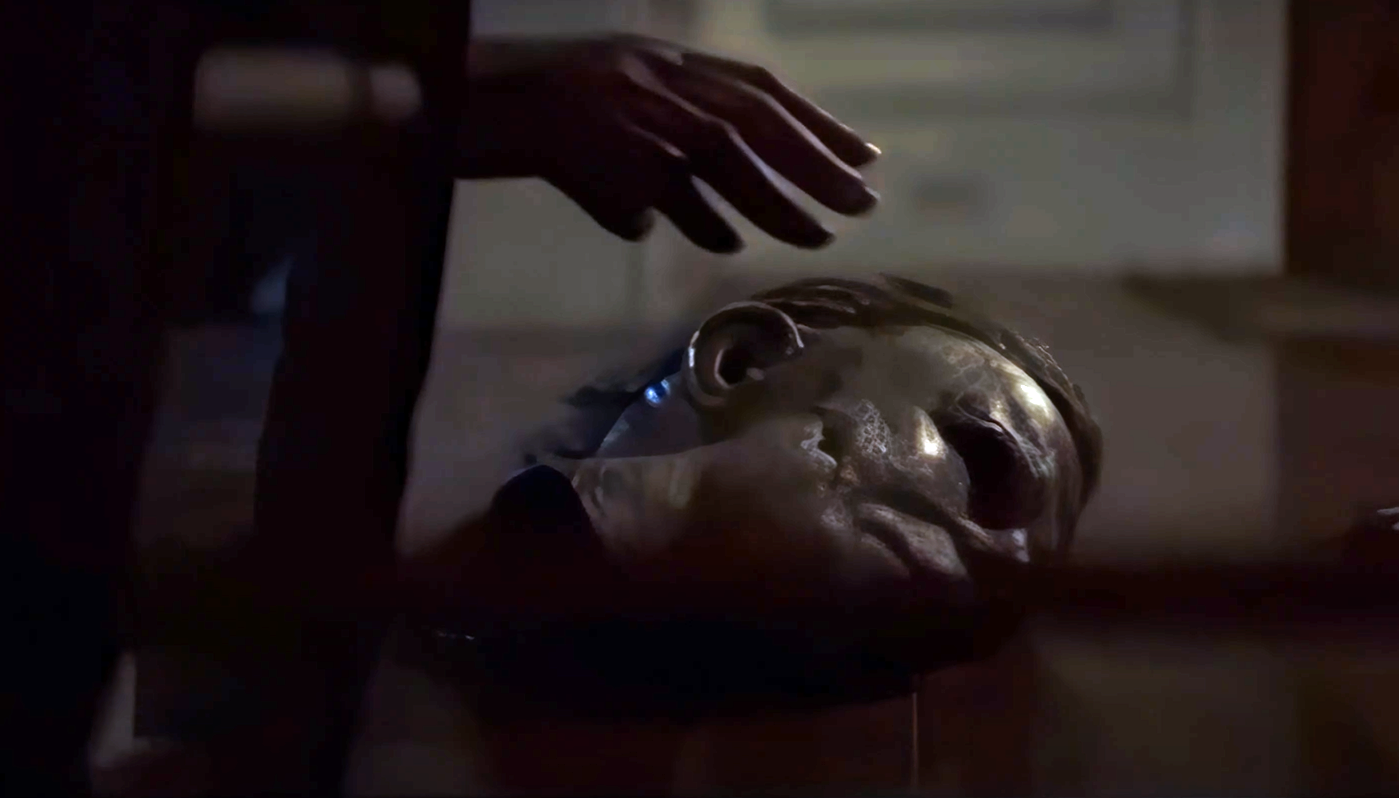 An argument can be made that David Gordon Green is among the more intriguing and unpredictable writer-directors. Just when one thinks they can pin him in a particular category of filmmaking, he takes a sharp turn to venture off into a genre no one saw coming. After making indie dramas such as George Washington and Snow Angels, he spent time concocting stoner comedies the lies of Pineapple Express and Your Highness. And now he completes a trilogy of Halloween films with Halloween Ends. It feels à propos to think back to the American’s career and as someone with an interest in people on the fringes of society. To be perfectly frank, it’s arguably one of the few ways to understand and possibly appreciate what he has in store for this supposed final confrontation between Laurie Strode (Jamie Lee Curtis) and her boogieman, Michael Myers (James Jude Courtney).

Further to the point about the auteur’s keen eye for the forgotten and misunderstood, audiences get an early and bitter taste of how someone can become the victim of social ex-communication.  Corey (Rohan Campbell) is a young man, barely out of teenage years, called into action to babysit on Halloween night in 2019. That’s one year following the events of the Halloween and Halloween Kills. Something terrible happens that isn’t entirely his fault – it’s complicated – that sends his life into a tailspin.

Why in the world does Ends open on a sequence seemingly disconnected from the two preceding chapters? Well, that’s because Green has something on his mind and, in the span of just a few minutes, the film performs yet another time jump to 2022. Laurie Strode is attempting to write her memoirs. She and granddaughter Allyson (Andi Matichak) share a house now, with the younger Strode working tirelessly as a nurse at the hospital. Corey, once a bright boy with a brighter future, earns money at his uncle’s salvage yard. As if ordained by fate, the trajectories of a sad, disliked figure in the community and a sad, victimized family collide. Corey and Allyson get to know and understand one another, but their bond is tested when an old foe announces his presence. Soon, the murders pile up, leading Laurie to save herself and her family from The Shape one more time.

Writing that synopsis was difficult. The simple matter about Halloween Ends is that it doesn’t do what the overwhelming majority of theatre patrons buying their tickets think it will. If anyone going to see this movie can accurately guess what director Green and his trio of screenwriters (Danny McBride, Chris Bernier, Paul Brad Logan) have cooking in the oven, hats off to them. There surely are some clever people out there with acute perceptive skills who can take a solid stab at it, but most won’t. As a result, this review will very much read as if it’s dancing around plenty of story beats. Honestly, that’s because it seems like the best approach for now.

Early buzz (or late buzz, given how the review embargo lifted at the latest possible hour for a general release film) suggested that Halloween Ends will divide moviegoers and especially fans of the franchise. It’s easy to understand why. The filmmakers strive for something off the beaten path with this third installment. Rest assured, the picture offers thrills, suspense, and a decent dosage of horrifying murders, just as any self-respecting slasher film should. In that regard, it fits the mold. And yet somehow it also doesn’t.

At the risk of repeating oneself one too many times, it’s critical here to remind ourselves of David Gordon Green’s path as a storyteller. The misfits, the abused, the social pariahs, these are the sorts of characters who have inspired some of his greatest works. His early days as a filmmaker was in the indie-drama scene, and that sensibility features prominently in Ends. Questions about the nature of evil seem like a facile avenue for a horror movie to take, especially a Halloween film given how the series has broached the topic before. In the case of this trilogy capper, the question itself is turned on its head. What can produce evil? How is it that we can treat one another so poorly that decent people can potentially give in to making the worst decisions?

Social mores, mental health, and issues of trust, David Gordon Green and his team peel the onion layers of those topics via studious character development. This is where evaluating Halloween Ends gets tricky. The director has proven himself more than capable of tackling drama of that nature in the past. It’s largely why he’s earned the reputation that he has. But that begs a question of epic importance: Why is it in a Halloween movie? Furthermore, why in the concluding episode of a trilogy that is supposed to wrap up an iconic story? The question is fair.

Certainly, some praise is deserved for usurping expectations in ways that clearly denote a serious, cogent thought process at work. It never feels as though Green and his team opted to throw the Halloween series playbook out the window on a whim. They had something specific in mind, something different, and went ahead and took a swing.

As for the more traditional elements that can be liberally discussed, the acting is uniformly strong. Newcomer Rohan Campbell holds his own in scenes with screen legend Jamie Lee Curtis. Campbell plays hopeful, curious, and confused effortlessly, even switching from one to the other on a dime. Curtis need not prove to anyone anymore why she is the franchise’s star (next to its villain, of course). What Ends aims for, by the fact that a chunk of the picture is before Michael’s return and 4 years after the events of the first two movies, is to show a Laurie who is mostly at peace. She’s living her best life, at least as well as someone who has gone through hell and back can live their best life. Andi Matichak is by now a very strong, likable figure in the series. Halloween and Curtis will always be synonymous with one another, but Matichak has carved herself a comfortable spot in its lore.

Mustering unparalleled suspense in the 13th installment of a series may be asking for a lot. While there aren’t many truly terrifying moments, Ends carries itself with an aura of creepiness, of a psychological doom that infects everything and everyone. Haddonfield, its denizens, its dark corners, they’re all stuffed with a crooked spirit. A malaise permeates the 110-minute run time.

Halloween Ends is not like the 2018 entry, nor is it like 2021’s Halloween Kills. It most certainly is dissimilar from the 1978 classic original. That may be why in some cases early responses – at the time of this writing, the weekend of release – have been so emotionally raw. There is no other chapter like this latest. If anything, Halloween Ends is unique. Are the film’s idiosyncrasies good or bad? That, of course, is what makes for great discourse when debating film. One thing is for sure, it required pumpkin-seized balls.

Festival du Nouveau Cinéma 2022 Dispatch: Shall I Compare You To a Summer’s Day, Cette Maison, and Before I Change My Mind