Connect with us
Serving as a love letter to the classic Carpenter film, 'Halloween' makes moves towards being about something greater.

It’s safe to say that Michael Myers is back. Whether that’s a comforting thought or not depends on whether you lived through the murders that happened forty years ago that fateful Halloween night. The original Halloween is a masterclass in tension and atmosphere, with one of the most iconic scores in horror history, and was the beginning of John Carpenter’s ascent to becoming a master of horror. Forty years later, David Gordon Green has picked up the mantle with the blessing (and involvement) of Carpenter, and an idea for how to make this franchise stand tall again.

Pretending that none of the sequels nor Rob Zombie movies exist, David Gordon Green and Danny McBride co-wrote a magnificent homage to the original 1978 classic in this 2018 sequel. Laurie Strode (Jamie Lee Curtis) has been waiting for Michael Myers to escape the asylum he has been sentenced to so she can finally kill him for the crimes he committed forty years ago. She’s even trained her daughter, Karen (Judy Greer). However, her inability to confront Michael as a person has forced her to only prepare for him as a murderous monster, and that lack of closure has pushed Karen and her daughter, Allyson (Andi Matichak), away. Laurie’s obsession with Michael has split her own family apart.

The most surprising element of Halloween is how much it leans into the importance of family. It deals with a person who has suffered a significant amount of trauma, so much so that she simply refuses to move on. There is a poignant message underneath the layers of blood and screaming, but unfortunately, it’s overshadowed by how much the screenplay feels anchored to the original film. Halloween is coming up, teenagers are babysitting and making out, and it all comes down to whether you want a mix of comfort with the new — or if you expected something wholly different. 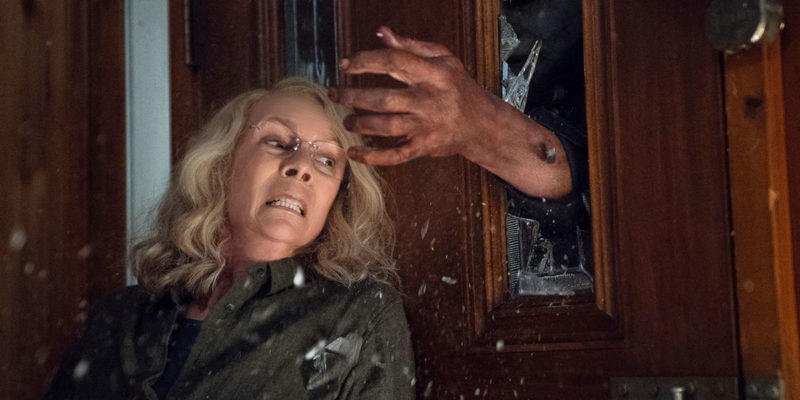 No real lore is added to this story — it just continues to play up the unstoppable force of Michael. In any other film that would be a problem, but as something that feels intended to breathe life back into a franchise that was beaten to death and dragged over the coals, it does plenty to justify its existence. However, that mainly derives from subverting expectations of how scenes will play out, and moving towards a cat and mouse dynamic that feels mutable. More often than not, the alterations feel like changes to the way the original played out, and not necessarily to how horror has existed. It’s not a subversion of the genre tropes, but instead plays with the original movie in a way that truly befits the time that has passed for Laurie and Michael.

It would be remiss not to mention a lot of what makes this Halloween stand out above the franchise’s other entries. For one thing, the camera is more dynamic than the original, but still feels similar because of its tracking shots (though they move slightly faster). The score (by John Carpenter, his son Cody, and Daniel A. Davies) also retains the original’s atmosphere, but with significantly more silence. There’s still the great original theme, but some new music is cued in at just the right times to feel like it always belonged. Most importantly, the evolution of Laurie — and the lack thereof in Michael — brings Halloween back with a bang.

Jamie Lee Curtis conveys a teenager trapped in a moment — what Laurie went through is something unforgettable and life-changing, even if no one else understands. That trauma is mined for all its worth; Curtis’s performance is incredibly touching, yet she also has the ability to walk into a room and carry herself like a badass ready to go hunting for murderers. 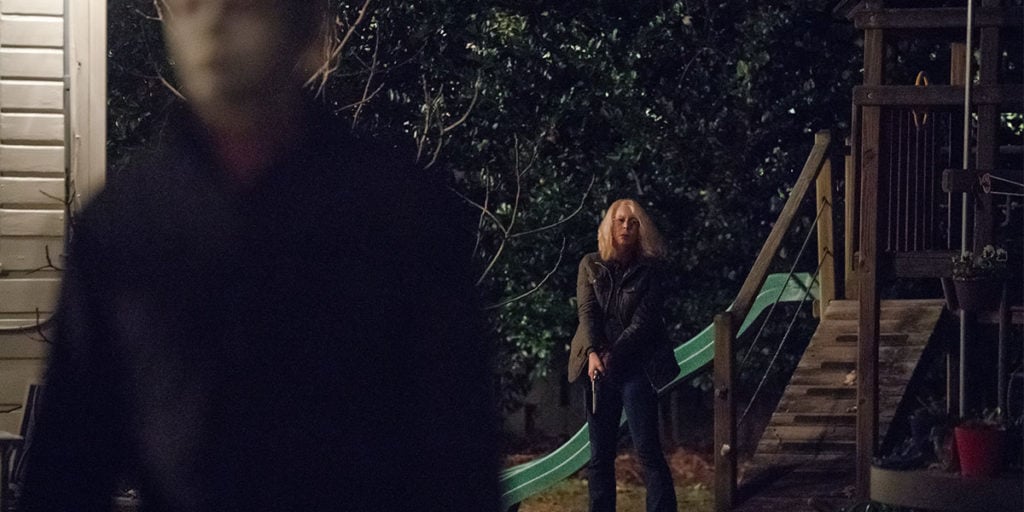 The violence is on full display here, and it’s rather impossible to forget some of the tense action moments that occur. That being said, restraint is somehow still shown. Kills aren’t necessarily conveyed in full; sometimes it’s just the aftermath that needs to be shown, and the uneasiness of what has happened to a character after seeing Michael is only further exacerbated by the injection of comedy. The original Halloween has its comedic moments, but they feel like off-handed additions to lighten the mood. This sequel uses comedy to mask or highlight fear. While all the high school kids are great in this film, they hide behind sarcasm and jokes. It feels real, and a much-needed way to give a connection to them before they potentially meet their untimely death.

Halloween is a beautiful return to form. Serving as a love letter to the classic Carpenter film, it makes moves towards being about something greater. Sure, it occasionally meanders into some boring territory and starts off with a subplot that doesn’t seem necessary in any way, but the way it captures the essence of the original and marries it to new themes of trauma, family, and learning to let go, is a great way to continue the series. Here’s to many more bloody Halloweens to come!