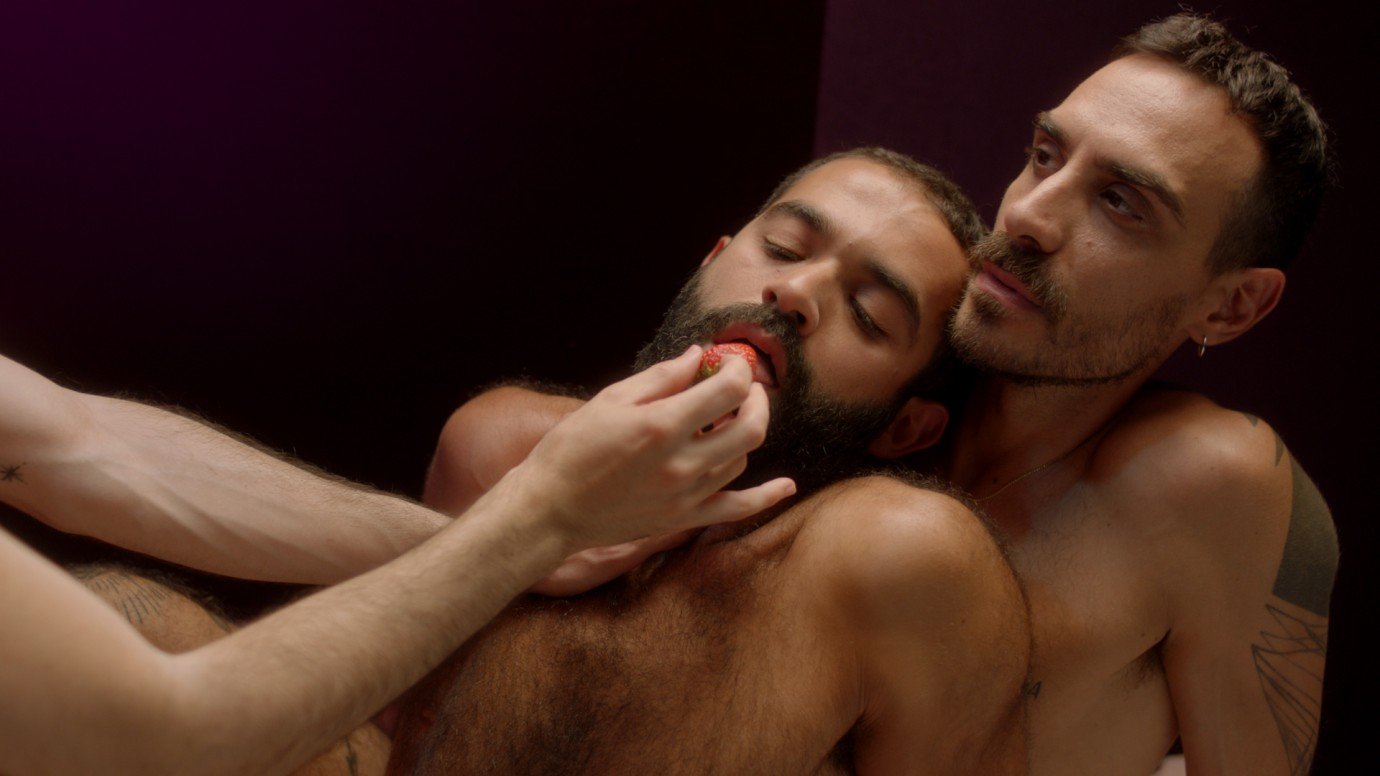 Shall I Compare You To a Summer’s Day

Mohammad Shawky Hassan’s Shall I Compare You To a Summer’s Day is absolutely breathtaking. Blending animation, montage, music, poetry, and a sort of surrealist take on mockumentary, the film paints a portrait of two gay men exploring their history with love, sexuality, and relationships. Their story is framed as one of the many stories told by Scheherazade in the One Thousand and One Nights: as this framing device and the film’s title suggest, classical references provide an important throughline for the film.

Hassan’s film asserts that stories of queer love and sex can be as timeless, classic, and culturally significant as important myths, legends, traditional stories, and important works of literature. The characters’ stories are treated with the reverence befitting one of Scheherazade’s tales, and the film’s tone produces a beautiful atmosphere centered in storytelling, oral tradition, classical poetry, and myth.

Despite its many disparate elements, the film comes together into a strong and coherent whole. The animated segments are gorgeous, the performances are phenomenal, and the sexual moments are sensual, intimate, and breathtaking. While the majority of the film’s tone is serious, sensual, emotional and romantic, it also has its fair share of comedy to lighten the mood. The result is a stunning piece that blends fairy tale fantasy with a deeply human, intimate, and relatable sensibility that is absolutely compelling. The montage style recalls classics of queer cinema like the films of Marlon Riggs; much like the Thousand and One Nights, the film manages to use fragmentation and instability to create a surprisingly profound and coherent whole. Shall I Compare You To a Summer’s Day is a positively beautiful film and is worth watching for anyone who cares about queer cinema.

In Cette Maison, Director Miryam Charles reflects on the trauma caused by the tragic murder of her young cousin Tessa (played by Schelby Jean-Baptiste). Taking a surrealist approach almost like a dream sequence, the film moves through a montage of scenes surrounding the event. These scenes include the grief Tessa’s mother Valeska (powerfully portrayed by Florence Blaine Mbaye) experiences as she learns about her child’s death, meaningful moments in Tessa and Valeska’s lives, and explorations of what Tessa’s life could have been like if she had survived. Jean-Baptiste portrays Tessa as a sort of ghostlike presence, trying to experience the life that she should have had and trying to connect with her mother in a way that transcends death.

A unique response to the recent popularity of the true crime genre, Miryam Charles’ film is a powerful exploration of what could be done if the limits of the genre were interrogated. The recent explosion in the popularity of True Crime has raised questions about ethics and exploitation. Charles’ approach is an innovative step for several reasons. Having a family member of the victim in charge of the film as writer and director keeps the agency over how the story is told in the hands of someone directly impacted by the tragedy. The film is also more interested in honoring Tessa and her family than in investigating the crime itself; the actual events of the crime take up very little time on screen, as most of the film is more about paying tribute to Tessa’s memory and exploring the emotional experiences of her family: the person is the primary focus, not the crime itself. The supernatural elements also avoid a preoccupation with facts or a probing type of investigation; rather, it is the spirit of the victim and the emotional experiences of those impacted that take center stage.

Cette Maison is a touching tribute and a reflection on grief, family, belonging, and the meaning of home. The relationship between Canada, Haiti, and the United States for a family who have significant connections to all three is central to the narrative, which explores the connection between pain and displacement. It is formally innovative, with stunning camera work and compelling design choices that mix the implied realism of 16mm film (which creates a sort of “home movie” visual) with the fantastical and supernatural framework of the montage sequences. Mbaye’s performance is phenomenal, and the film as a whole is simultaneously innovative, harrowing, brilliant, and touching.

Before I Change My Mind

Trevor Anderson’s Before I Change My Mind is a classic childhood coming-of-age story in the vein of Now and Then (1995) or Stand by Me (1986). Intervening in a genre that is historically very strongly gendered (Now and Then is often seen as “Stand by Me for girls“), Before I Change My Mind explores common childhood issues such as bullying, cliques, gender identity, relationships, and growing up from the perspective of nonbinary child Robin (Vaughan Murrae). The film is charming, relatable, and sincere; the serious moments are sufficiently compelling, and the comedy is often very funny. While Before I Change My Mind sometimes feels a bit unfinished, and the film could have used a bit more time in development, the end result is still enjoyable and a good sign of what Anderson would be able to do with a bit more time and budget.

The plot follows Robin as they start out at a new school. Initially bullied and outcast, Robin slowly starts to develop a complicated and sometimes harmful relationship with the popular kids who originally bully them. Robin learns along the way that these popular kids and bullies are a lot more complicated, insecure, troubled, and messy than their seemingly confident exteriors initially suggest. Particularly meaningful and particularly fraught are Robin’s relationships with troubled bully Carter (Dominic Lippa) and outcast Tony (Jhztyn Contado), the latter of whom faces racist bullying. Desperate to fit in, Robin finds themself slowly being influenced towards troubling behaviour in an attempt to befriend Carter, becoming a bit of a bully themself. Robin also gradually learns that all of the other kids have deeply-rooted insecurities and struggles of their own. The result is a compassionate, nuanced look at childhood, relationships, stereotypes, and growing up. None of it is particularly new, but it’s still very well done, and having a nonbinary protagonist does give a fresh perspective on a genre that is so often heavily associated with gender binaries.

One of the best parts of the film is its humor. Seeing a bunch of Alberta school kids gets excited about a trip to the West Edmonton Mall as if they’re going to Disneyland is fun and relatable for anyone who grew up in a smaller Canadian city or town. One of the highlights of the film is the characters’ experience with a terrible community theatre play that is perfectly campy and ridiculous. Ultimately, while the film feels a bit unfinished, it is still very enjoyable and touching. Almost every character and plot thread needed a bit more time and development (particularly Tony’s character), and a lot of elements feel unsatisfying due to this lack of development or closure. However, what is finished is fantastic, and it is likely to leave audiences longing for a more finished product from the clearly-talented Anderson and future projects from the talented cast and creative team.