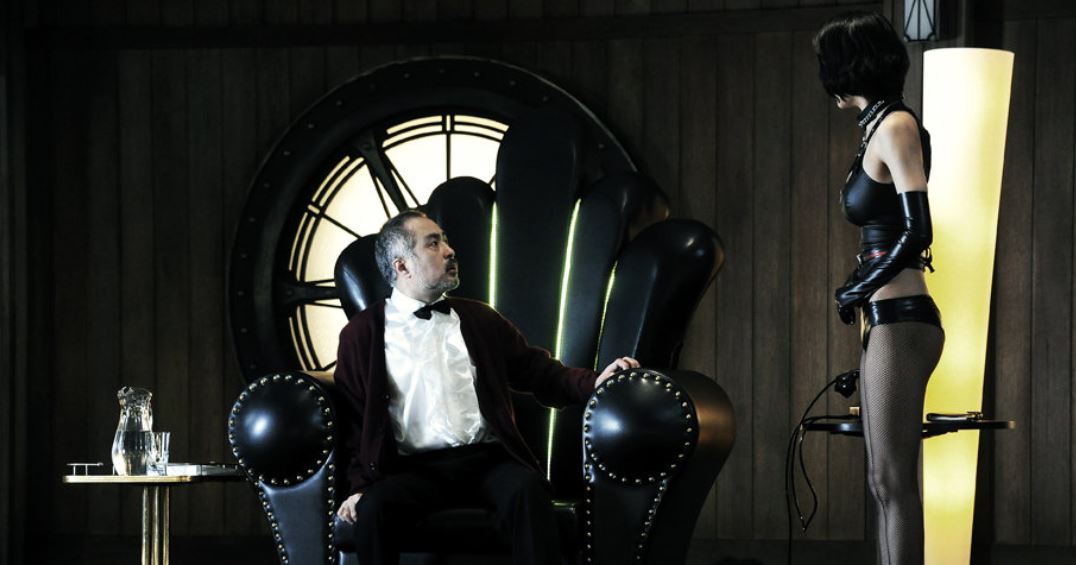 Hitoshi Matsumoto, the director and star of Big Man Japan, which was shown at the 2007 Cannes Film Festival in the Directors’ Fortnight section, made a return to the big screen with this 2013 cinematic oddities.

In R100, Nao Ohmori (star of Takashi Miike’s Ichi the Killer) plays Takafumi Katayama, an average husband, and father who escapes the troubles of daily life by joining a mysterious S&M club, where the dominatrices called Queens make surprise visits to their clients in the most unusual places. While at first, the rough treatment and humiliation he receives from the women dressed in shiny leather one-piece catsuits, thigh-high stilettos, garter stockings, and suspender belts are enjoyable, the situation escalates out of control when the ladies begin to appear and punish him in cafes, public washrooms, and even by the side of his hospital-bed-ridden, comatose wife. Unable to end his relationship with the club, he finds himself stalked by the gang of ruthless women, each with a very specific discipline.

With R100, the director/actor seems to want to challenge the concept of a rating, or any kind of critique of movies. Matsumoto is one of Japan’s leading comedians, so it is no surprise that the title of his latest film is itself a play on the Japanese movie ratings (R-15 and R-18), and suggests that the viewer should be at least 100 years old to see the film. The intrigue when stepping in to watch R100 is to see just how far Matsumoto is willing to go to lead his audiences into a world that is unlike anything they have ever experienced.

This being his fourth feature, I expected more since it has an inventive set-up and promise, but by the hour mark, it quickly wears thin. A massive star in Japan, where he is best known for his zany television comedies, Matsumoto has dazzled audiences for years, each time outdoing himself in terms of strangeness and ingenuity. With R100, he returns with a distinctive take on the sex comedy, only there is very little here that shocks, surprises, or gets audiences laughing.

If the intent here is to push cinematic boundaries, then R100 fails, dragging its way to the end with pretty harmless content. If you’re going to put such a strong decree on your film, audiences will expect you to follow through. That aside, R100 is simply tedious and suffers from sloppy editing, lazy cinematography, and a terrible score. The first act, for example, shows an internal conflict. Takafumi attempts to separate the emotional burdens of his everyday life by taking pleasure in his painful sexual fetish; but halfway in, the film quickly shifts into a comic book b-movie of sorts, abandoning any hope for characterization or internal struggles.

Cheap Thrills is a Nasty Piece of Work