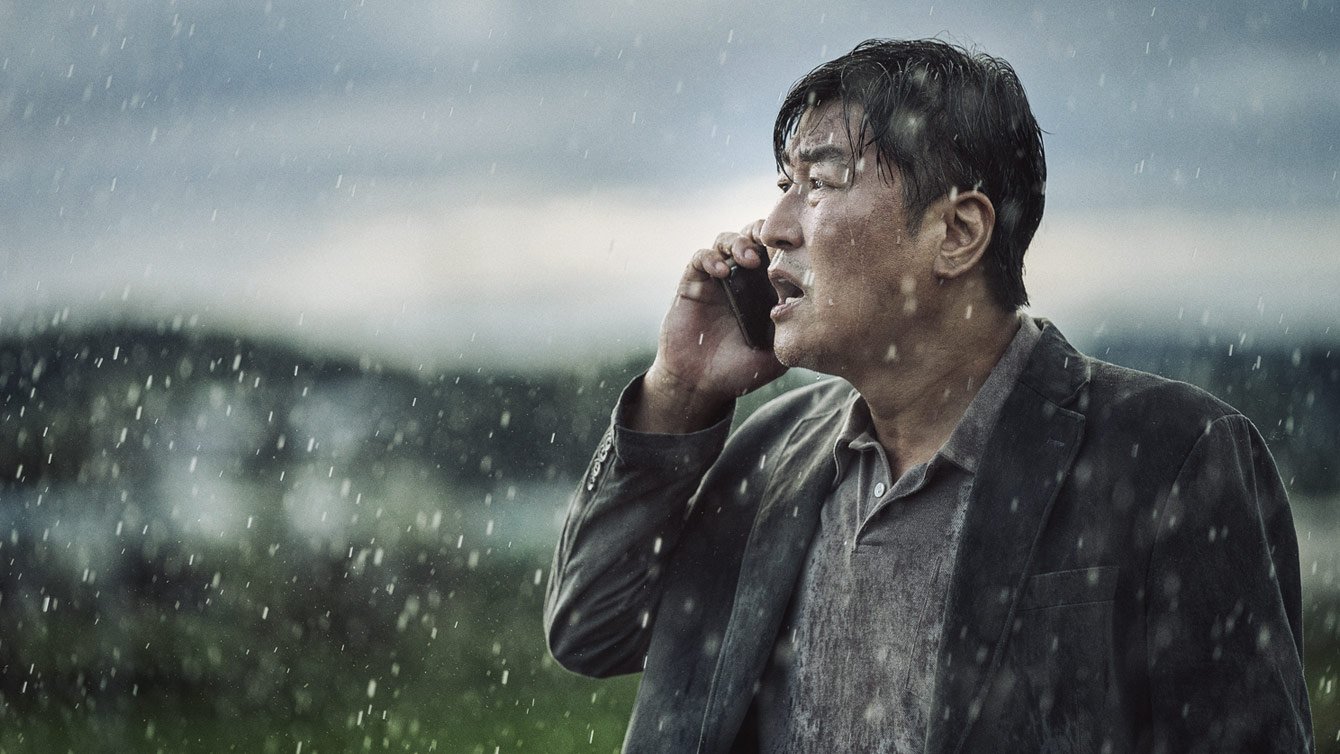 Though the infectious virus that propels the film forward will no doubt remind audiences of the ongoing COVID-19 pandemic, Emergency Declaration comes to the table with a pulse-pounding thriller and a satisfying glimpse at bureaucracy in the face of human lives and survival. Han Jae-rim’s latest features a charismatic cast and a healthy dose of peril and panic to create mass hysteria as its relatively small-scale conflict threatens to spin out into worldwide pandemonium.

What’s most surprising about Emergency Declaration is that it gives itself plenty of time to nuance its depiction of a terrorist attack without spending too much effort on making every character matter. At a runtime of 147 minutes, it’s shocking that the first third of the movie is centered more around In-ho (Song Kang-ho) – a police detective who finds himself chasing a lead about a man threatening to release a virus on a plane. When he quickly realizes that the plane his wife has boarded to Honolulu has also been boarded by the prime suspect, Jin-seok (Yim Si-wan), he finds himself compelled to look into the threat.

Coincidentally, suspicion of Jin-seok goes outside of the video he released threatening the attack, as Jae-hyuk (Lee Byung-hun) and his daughter notice the man acting weird in the airport before finding he has also boarded their flight to Honolulu. An intersection of strangers, Emergency Declaration could have spiraled out of control with focusing on too many characters at once, but Jae-hyuk’s arc is tied exclusively to the flight while In-ho tirelessly works to figure out what is going on with his wife’s flight and the suspected terrorist aboard.

Quickly, Han wastes no time revealing what his movie is about: a pandemic not quite in motion is on the precipice of worldwide panic based on how the situation is handled. A virus is immediately deployed on the flight and the passengers risk infecting themselves and everyone they know once they’ve landed. It’s a harrowing series of events and the way Han handles it is chilling. Some intense, graphic scenes of the virus in action punctuate the already claustrophobic setting of a plane and a bunch of passengers trying to survive each other.

Where Emergency Declaration is at its most interesting is on the ground though. In-ho and a counterterrorism task force led by Sook-hee (Jeon Do-yeon) are forced to learn more about Jin-seok, his motives, and what exactly he’s infecting the passengers of the flight with. A race against the clock that never lets up, Han’s screenplay ratchets up the tension with the bureaucratic nightmare of what to do when a virus is contained but risks spreading if not handled properly.

There’s so many nuanced ideas to the idea of a petri dish in the sky waiting to come into contact with the ground again that it’s frustrating to see that Han’s script doesn’t actually have much in way of a voice. Every bit of emotion is derived from the situation, but Han doesn’t stick to one path for his characters. Instead, Emergency Declaration always feels like narrative threads end twice. More often than not, it’s just to have the depressing path play out until Han has wrung every ounce of melodrama from the situation before backtracking. The way it’s handled is effective, but it always takes the wind out of the impact of a scene.

There’s also plenty of unnecessary subplots such as Jae-hyuk’s past relationship with the co-pilot of the plane and his daughter’s medical condition that sees them going to Honolulu. There’s just nothing really to latch onto with any of the subplots; clearly their existence is because Han’s confidence in just making a nuts-and-bolts thriller is overshadowed by a need to make it emotionally resonant as well. What’s funny is that the bioterrorist threat at its center is relatable enough and the reactions of passengers on board and people on the ground feels realistic and their emotion palpable enough. Add to that a cast that leans into their characters to staggering effect and Emergency Declaration always feels resonant. It doesn’t need the fluff.

However, every extra piece of story is hardly in the way. It’s the complexity of the main plot that is riveting as it spirals in and out of control. A high strung sequence of tense decisions with each one threatening to be the downfall of its passengers or their saving grace. No performance feels like it’s milking the moment, but Han’s screenplay ensures that no stone goes unturned as it tries to cross every line it can to get to its resolution. Emergency Declaration isn’t without fault, but it also rarely loses steam and presents an intricately detailed portrait of the fragility of life and how easily humanity can be thrown off balance.