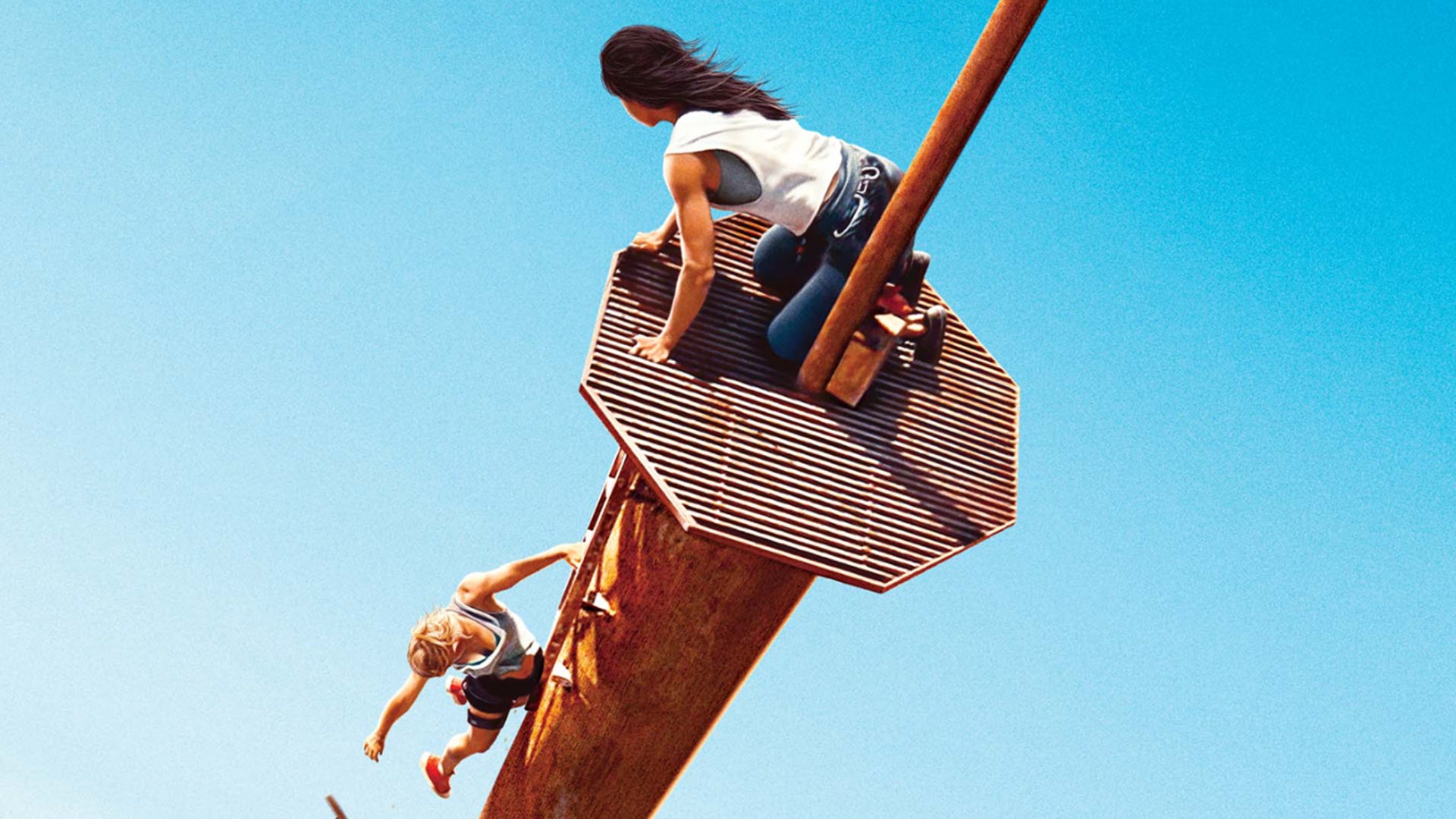 How many movie villains have fallen to their death over the decades? Hundreds? Thousands? Sometimes even good people plummet to their death in cinema, such as that poor alpinist at the start of Cliffhanger. One doesn’t need a fear of heights for the palpitations to flutter when imagining oneself hanging from high above. The drop…down below, as one is still alive for a few final moments before getting ignominiously splattered onto whatever rock or terrain welcomes our soft bodies. Then again, some people can’t get enough of climbing vertiginous heights. Take for example the two lead characters in the latest thriller about people performing maddeningly dangerous feats: the appropriately titled Fall.

Becky (Grace Caroline Currey) and Hunter (Virginia Gardner) are climbing enthusiasts. Hunter carries herself with more daredevil enthusiasm whereas Becky adopts a more cautious approach, but both are keen fans. So is Becky’s husband Dan (Mason Gooding). At the start of the picture, the trio makes its way up an impressive rock wall, egging each other as they go. It’s all fun and games until Dan falls off the side when surprised by a flock of birds. As he hangs desperately from below, the girls try to secure the pin holding his harness chord. Too late. Dan falls to his doom.

One year later, Becky’s father (Jeffrey Dean Morgan) still cannot console her. Depressed and a heavy drinker, Becky is a lost soul. That is until Hunter offers her best friend an opportunity to face her demons by climbing a defunct B67 tv antenna tower. So they venture into the Californian desert, find the abandoned metal structure that rises to the heavens and start the trek upwards. Their audacity comes at a price, however, for once atop the retired antennae, the ladder breaks off, leaving them stranded like few people have been strained before.

Thrills of Living on the Edge

Directed and co-written by Scott Mann, Fall takes a simple premise and squeezes as many thrills and as much drama out of it as it can. From a conceptual standpoint, the endeavour is no cakewalk. The two leads need to be interesting given the audience will spend 99% of the film’s 105 minutes with them. The climb up can’t be too easy. Once stuck at the top, a large enough number of individual challenges (read: action scenes) are required to keep up with the thriller aspect. Finally, given the relatively modest budget (reportedly $3M), the picture still needs to look convincing. It’s not as though two up-and-coming Hollywood actors are really going to climb over 2,000 feet in the middle of nowhere. Tom Cruise wasn’t available.

It feels good to write that, as the 2022 summer movie season winds down, there is still reason to avoid the heat by visiting the theatre. Fall packs all the punch it can into every minute. A lot of credit must be showered onto cinematographer Macgregor (his IMDB credit is literally just that one name). Having dabbled predominantly in short films, his eye for both beautifully epic and unnervingly dangerous-looking shots is wonderful. “Dangerous-looking.” It should be noted that digital wizardry is utilized to lend more impact to several shots, but let that not overlook MacGregor’s terrific work, especially when the camera is truly looking out at the famous Mojave Desert in California. If anything, the sense of pure isolation from a gobsmacking, bizarre position, a desolate tv tower, is brilliantly communicated.

Similarly, sound design is virtually just as critical, if understandably an aspect that plays second fiddle to the obviously important visuals. Looking out and looking below are what produce immediate chills. So too does the wind, the cries of vultures (un-ironically important side-villains) and the nerve-wracking metal clanking of loose screws that hold the ladder together. The audio experience is superb and excels at transporting viewers to this insane place Becky and Hunter have chosen to get away from it all and reconnect.

To sustain drama and story for over an hour and a half, especially in a single location, most Hollywood scripts need some meat on the bone. It so often feels in movies that aim for a similar cinematic effect that the script is what drags the proceedings down. In the case of Fall, the script is rather decent. Spoilers will be avoided, but anyone who has seen enough movies knows that something is going to have to give. Something needs to happen for the characters to keep talking to each other while attempting to signal for help.

Director Mann plays things diligently and with a deft enough hand that the dialogue and tension are organic. There is something of a puzzle at the film’s center, one that holds considerable importance for the friendship that bonds Becky and Hunter. Some people may think it’s too much, that the film is best when it deals with the rawness of the fatal challenge our protagonists face. Overall, it works just well enough to add at least some depth. From a different perspective, it works a lot like a bottle episode of a drama. Neither can go anywhere, however much they desperately need to, and so conversations grow intense.

Speaking of the stranded heroines, both Grace Caroline Currey (many may remember from Shazam!) and Virginia Gardner are great in their respective roles. The chemistry is natural, the friendship feels real, and their opposite personalities bounce well off one another when the goings get tough.

The End of the Summer is Female

Who knows if this was intentional or not but Fall drops into theatres this weekend just as Halina Reijn’s Bodies Bodies Bodies goes wide. The latter has gained considerable buzz since its surprise screening this past spring at the SXSW festival. Its marketing push has also been more significant than Scott Mann’s picture. Hopefully, Fall will find an audience, even if it’s on digital on demand or streaming some time down the road. The movie has come out of nowhere in many respects and, lo and behold, is a ton of fun. Whatever you do, just don’t look down.