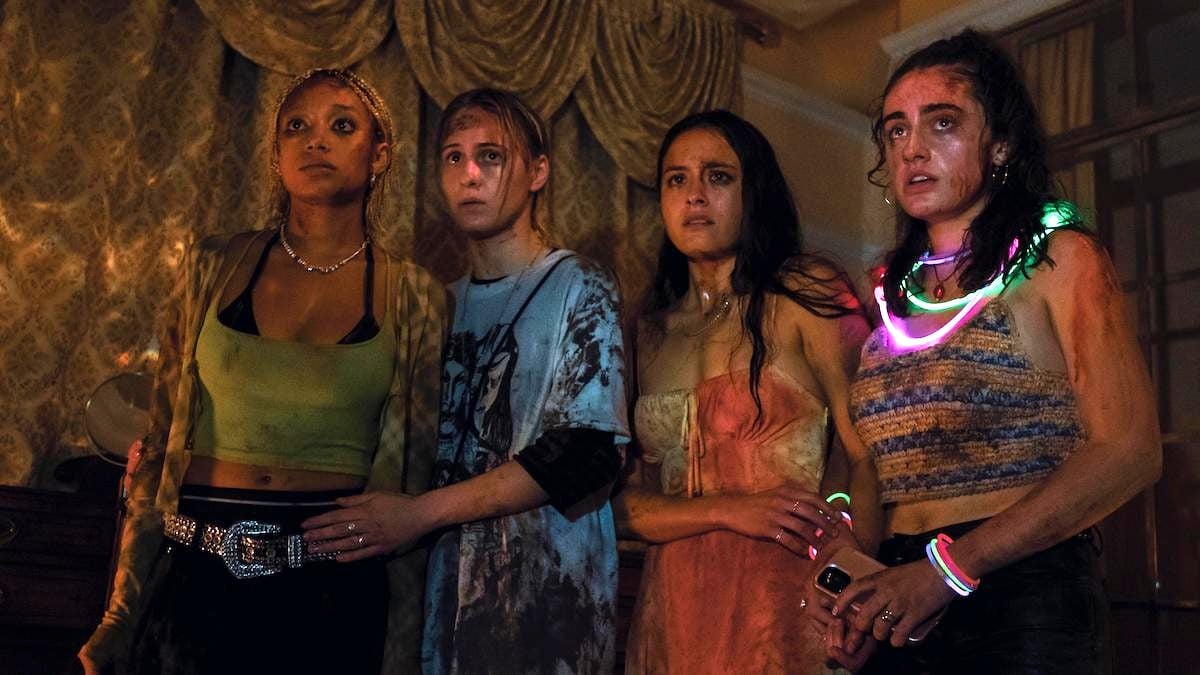 For anyone who has ever had a bit too much to drink at a party that got a bit too out of hand, the atmosphere of Bodies Bodies Bodies will feel deeply familiar. Halina Reijn’s comic murder mystery perfectly captures the absolute chaos that can ensue when bad choices are made, substances are consumed, and complicated friend group drama bubbles to the surface. It’s also an extremely well-crafted whodunnit that is much smarter than it lets on. Bodies Bodies Bodies is the perfect balance of ridiculous and outlandish humor tempered by exceedingly clever writing, and it’s an absolute blast from beginning to end.

The premise is simple: after a long period of estrangement from her long-time friend group, Sophie (Amandla Stenberg) decides to attend a “hurricane party” at her friend David’s (Pete Davidson) family home. She also brings her new girlfriend Bee (Maria Bakalova), who is intimidated by how wealthy and extravagant Sophie’s friends are. The party quickly gets chaotic as people begin drinking, doing drugs, and confronting each other over interpersonal drama. However, the chaos reaches its peak when one of the partygoers turns up dead.

Despite being advertised as a both slasher and a horror film, Bodies Bodies Bodies is neither of these things; it is a classic Agatha Christie-style murder mystery taken from a primarily comic point of view. The film has a lot more in common with Knives Out (2019) or Clue (1985) than with the slasher genre. And, with apologies to the wonderful Knives Out, Bodies Bodies Bodies it is quite possibly the best fusion of comedy and whodunnit since the cult classic Clue came out 37 years ago.

One of the most exciting performances in Bodies Bodies Bodies is Rachel Sennott as an amateur podcaster and professional hot mess Alice. Sennott is hilarious, and every minute that she is on screen is an absolute treat. In addition to her obvious talent for comedy, Sennott’s talent really shines through with the empathy and emotional realism that she brings to Alice. It’s easy to approach a character like Alice as a shallow caricature of an inebriated, messy, vapid party girl; however, Sennott ensures that Alice is more than that. She is still a hot mess and a bit vapid, but she also has genuine emotional depth that comes out more and more as the film progresses. Sennott manages to infuse her comedy with enough pathos to make Alice both funny and lovable, and she gives a positively stellar performance. Sennott is relatively new to feature films, so here’s hoping Bodies Bodies Bodies will lead to her appearing in many more features in the future.

The entire cast is absolutely stunning. Relative newcomers to film like Sennott and Myha’la Herrold (who has been making a name in TV and theatre but is newer to film) accompany household names like Amandla Stenberg, Pete Davidson, and Lee Pace, and they all stand on equal footing. Everyone has at least one memorable, standout moment, and the cast does a phenomenal job with a group of incredibly engaging characters. Even the shy and quiet Bee, who is much less extravagant than the rest of the cast, has her moments.

Sarah Delappe’s screenplay is extremely well-crafted. Bodies Bodies Bodies creates a beautifully chaotic and messy setting, but this setting is grounded by a clever script that knows exactly what it wants to do. The characters may be frequently confused and disoriented, but the script rarely is; the ridiculousness is carefully planned and cleverly implemented. It takes a skilled writer to generate a sense of random mayhem that hides the fact that it is actually incredibly well thought-out, and Delappe perfectly navigates this balance.

There are a few moments, however, where Delappe’s writing slips a bit. These moments usually involve references to technology or social media. There is a particularly cringeworthy moment where a character says that she is “bad at texting,” giving the impression that she is 78 years old and still trying to figure out how these cell phone things work. Most references to Millennial and Gen Z culture are pretty well-done, including references to astrology, a riff on performative allyship, clever commentary about podcasts, and a surprisingly compassionate and understanding discussion of mental illness that explicitly critiques the ableist history of horror films. However, Delappe’s usually zeitgeisty sensibilities sometimes falter, and the script occasionally comes across as a bit boomerish.

There are also one or two plot points that feel a bit forced, including one notably tacked-on plot moment that feels strangely less well-planned or integrated into the plot as the rest. However, despite these very small flaws, the majority of the script is fantastic, and the shortcomings in no way overshadow the fact that the writing is, on the whole, incredibly smart, well-structured, and incredibly funny.