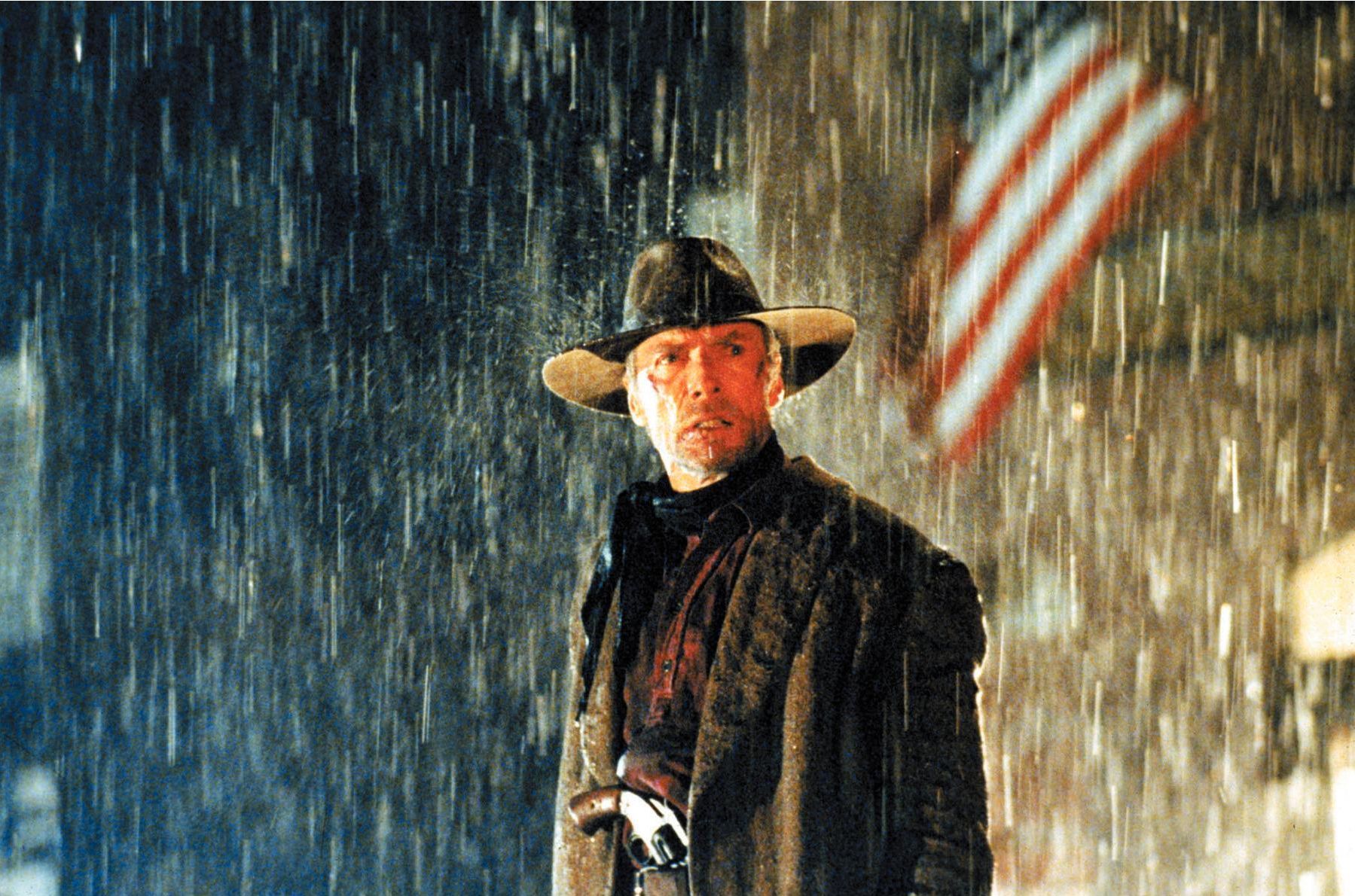 Clint Eastwood’s masterful and hauntingly beautiful Unforgiven reads as a powerful wake for the Western, an elegy to the genre that birthed Eastwood’s legendary stardom. While he would go on to reach great acclaim after its release (Million Dollar Baby, Mystic River, and Letters from Iwo Jima to name a few), Unforgiven is very much the pinnacle of his storied career, as it’s the stark culmination of perfecting and streamlining almost three decades of work both in front of and behind the camera.

It’s no surprise the film is classical in its filmmaking approach yet revisionist in tone, wholly embodying Eastwood’s cinematic mindset; humble and efficient but grounded in tremendous philosophical and thematic weight.

The film itself is an intricate and dynamic interplay between the classic Western and the provocative revisionism that followed suit, becoming a perfect blend of both which, in many ways, is a zenith of the form. A literal gold standard that deconstructs and refines every facet of the genre, becoming a criterion on which other works will be judged.

While shot in a classically beautiful fashion by Jack N. Green, helped along with Eastwood’s trademark style (a reputation for going with the first or second take) and a wistful script by David Webb Peoples, Unforgiven lays bare a requiem for the west, and its innate savagery, brutality and, misguided penchant for mythmaking. Wyoming’s pictorial landscape (really Alberta, Canada) exudes a simultaneous magnificence and heroism that evokes the genre’s golden age, but Eastwood and company subvert its beauty, unearthing the bigotry and savagery that truly pervaded the American heartland.

Despite it being a Hollywood production through and through, Eastwood pierces the industry’s traditional glossy veneer to harshly, but eloquently, confront the American appetite for violence and its inherent tendency to aggrandize the men who harrowingly carry it out.

Eastwood includes himself in that group, as his legendary “Man with no Name” figure is transformed into a grizzled old man who must not only live with the sins of the past but viciously come to terms with them, one bullet at a time.

That old man is William Munny, and he’s seen it all. His vicious background has made him a reclusive soul (and a failed hog farmer) whose crimson-stained legacy speaks for itself. He has no qualms about what’s waiting for him on the other side, and his recent efforts in protecting the honour of a prostitute and his best friend Ned (Morgan Freeman) may have redeemed a bit of it, but it’s not enough to quell the tide that will surely envelop him. When he tells the young and ambitious Schofield Kid (Jaimz Woolvett), “We All Have It Comin,’”, it rings with the potency of an excruciating truth.

The western was already well past its gilded age when Unforgiven was released in 1992- 30 years ago this week. For all intents and purposes, the western was either dead or dying, with recent offerings being parodies of themselves, doubling down on its cliches and overt ruggedness – Take the Young Guns Films and Back to the Future Part III.

But Unforgiven embraced the genre’s twilight with open arms, reconfiguring it into a poetic lament for the genre that unearthed the violence that tied together a national identity and a prevailing mythology of heroes and villains. Eastwood’s final western would not only be one of redemption and closure but one of post-existence.

Unforgiven is a definitive piece of work that many have claimed is the “last great American western”. But its cinematic and cathartic force is utterly felt in the “new era” it ushered in: An afterlife for the American Western, a phase of introspective and reflective works that build on the revisionism and solemnity it boldly reveled in.

The greatest American films of the twenty-first century can trace their lineage back to this elegiac masterwork. Paul Thomas Anderson’s There Will Be Blood, the Coens’ No Country for Old Men, Andrew Dominik’s The Assassination of Jesse James by the Coward Robert Ford, and even Tarantino’s Django Unchained all embrace the violent revisionism that Unforgiven mournfully confronted.

Eastwood’s cinematic eulogy did not mark the final nail in the coffin for this uniquely American art form but allowed it to transcend onto a solemn, meditative, and wistful plane that continues to daringly challenge American myths and legends.

Syndrome K: An Efficient Doc About How a Fake Disease Saved Lives in WWII