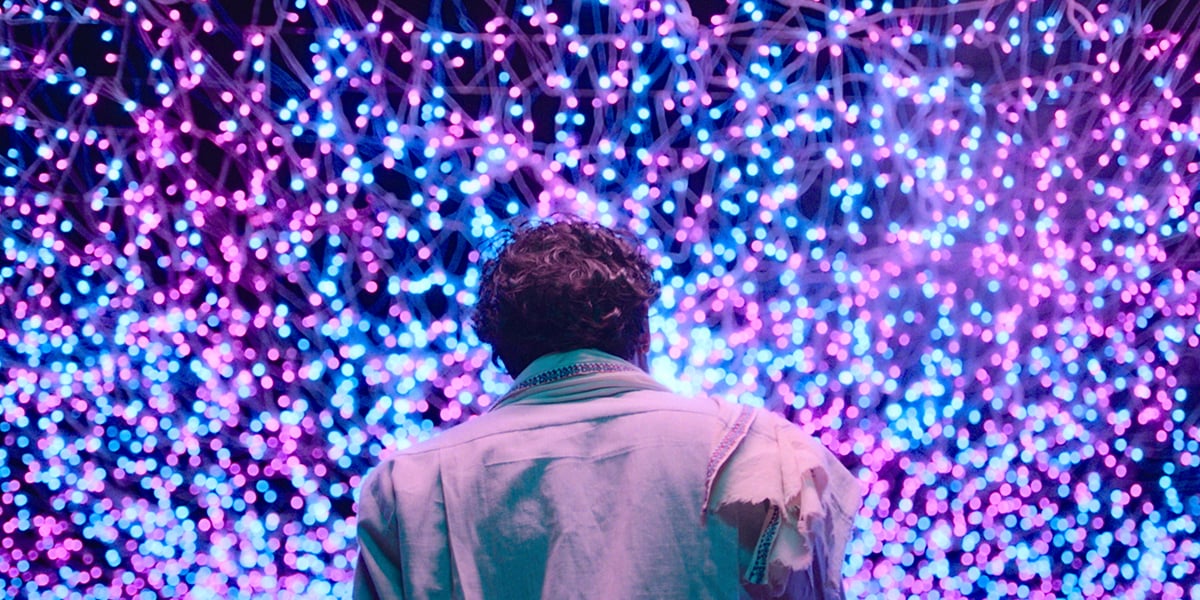 An alcoholic ponders his existence as he stumbles out of a bar, riding off into the highway on his Dug Dug motorcycle. As the night air crosses his face and the alcohol does its work, he’s in another world. Then destiny takes the wheel in Ritwik Pareek’s Dug Dug – a sleek satirical look at the birth of a new religion. Infectiously energetic, Pareek deconstructs the commercial elements of faith with an overwhelming sense of style and panache that gives Dug Dug a uniquely propulsive momentum.

Thakur (Altaf Khan) isn’t really any one of note, but after he dies from a freak accident involving his Dug Dug motorcycle, he becomes a God. Not literally, but people flock to the crash site when the motorcycle involved in the incident magically reappears the day after, believing there to be some act of God imbuing the motorcycle with the spirit of Thakur. Situated underneath a mysterious Billboard with a figure on it gazing upon it, priests and civilians alike gather to offer gifts to Thakur and in exchange expect their own lives to improve.

At the foundation of Dug Dug is its cynicism towards the ease with which people lean on faith. Mostly manifested in one police officer’s skepticism towards the new religion, it’s the sincerity that Pareek commands towards its subject that gives the film a glossy, slick aesthetic. When a priest says alcohol is a suitable offering to Thakur, everyone rightfully questions whether alcohol is a suitable offering, but Thakur was an alcoholic so if you want to get in his good graces, it’s probably best to offer him booze. That kind of dialogue with the tenets of religious custom continues throughout as this new religion forms its own unique vibe.

What a vibe it is though. There’s a point when most people will check out and it’s likely after the second or third montage. There are a lot and it all goes hand-in-hand with Dug Dug’s exploration of what it means to draft a new religion, raise its popularity, and have it sustain itself on its own. A couple bizarre events don’t necessarily amount to something special, but throw in one long party sequence and that’s the last half of Dug Dug. Vibrant colors pop on screen as the score from Salvage Audio Collective keeps a constant foot-tapping rhythm on top of crash zooms and quick cuts of Thakur’s site of worship expanding rapidly. It’s a party and everyone’s invited.

That energy and fervor permeates throughout Dug Dug and captures both the essence of its God and the commercialization of religion. Offerings are given in the form of a transaction, kiosks and a charity in Thakur’s name are set up near sites of worship, and it’s all in the hopes of their own lives getting better in exchange. The single recurring image throughout all of the montages is a man working a kiosk near the crash site who inflates a large balloon. The film cuts back to him so often that you’re just wondering whether it’s going to pop. Will the party and disillusion ever end? As with the balloon, anything that expands that much and doesn’t stop will inevitably burst – but that doesn’t mean you can’t ride the wave while it exists.

There’s a lot to pick at with Dug Dug and that’s ultimately where it left me slightly disappointed that it focuses so much on its glossy exterior. It drives home a singular point, with so many other interesting ones hanging there, not quite ripe. A subplot involving the skeptic police officer and his wife feels like it’s supposed to have this significant weight to it, but the movie spends so much time building an idol that it doesn’t really give time to flesh out the impact that idol has on each individual’s life. There are passing reports of prosperity and good luck, but Dug Dug just never quite breaks out of its infectious parade of style.

TIFF 2021: Vengeance is Mine, All Others Pay Cash Confronts Male Fragility

Revisiting Jacques Tourneur’s Out of the Past