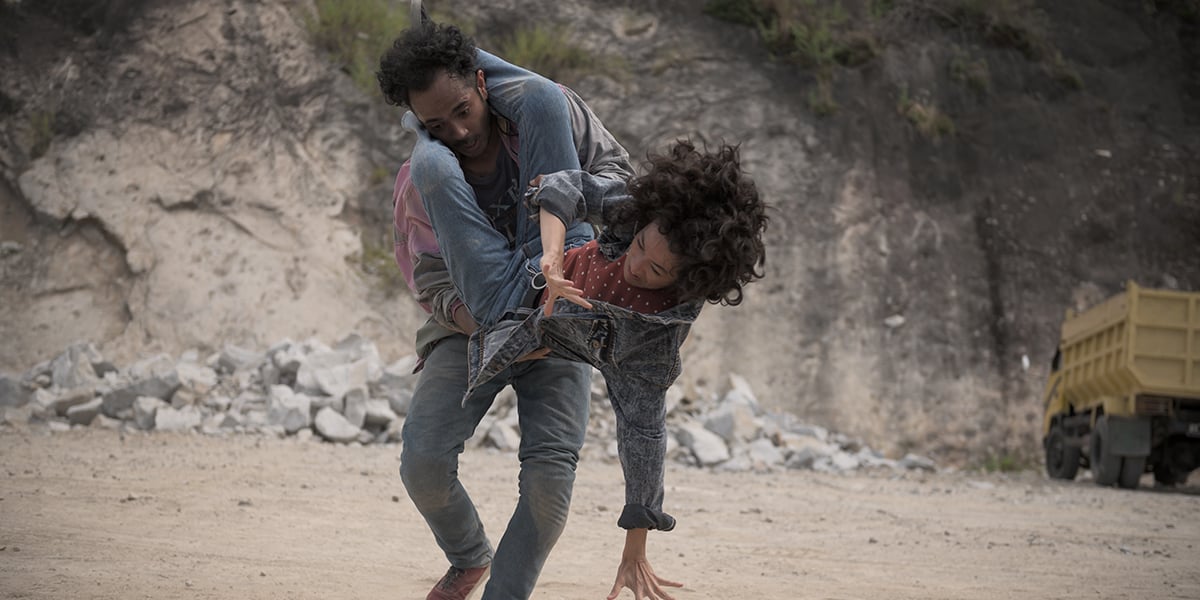 Vengeance is Mine, All Others Pay Cash Review

Vengeance is Mine, All Others Pay Cash is a smorgasbord of action, romance, and comedy. One of Indonesia’s leading auteurs, Edwin delivers a tremendous martial arts film that gives some great, impactful fights atop a surprisingly sweet romance in a testosterone-fuelled world. Drenched in style and precise in its takedown of machismo, Edwin’s latest derives from its retro aesthetic a love letter with an unforgettable roundhouse kick to all of the macho cinema of the past.

The prerequisite for male-led action films often ends up being that they are virile, usually manifesting in burly fights or a sex scene with a romantic interest. Vengeance is Mine, All Others Pay Cash immediately subverts expectations with Ajo (Marthino Lio). He can’t get an erection but he can fight. Taking contracts from others, his constant bloodlust helps combat the shame felt about his own impotence, as well as hide it from most onlookers. That is until he meets Iteung (Ladya Cheryl) – the bodyguard of his next target.

The romance that blossoms between the two are instantly palpable. Their first brawl with each other already shows sparks flying, each one committed to achieving their goal and throwing themselves into the fight. When their relationship becomes a reality and Iteung looks past Ajo’s impotence, the two feel like kindred spirits ready to take the world on. Anchoring the film so that its diversions all come back to their relationship, Edwin’s screenplay (based on the novel of the same name by Eka Kurniawan) positions the two as equals on their own redemptive arcs.

The star of the film really ends up being Ladya Cheryl’s Iteung, both in terms of performance and her character. There aren’t many women in the film outside of Iteung and the mysterious Jelita (Ratu Felisha), both of whom have their own quests of vengeance to pursue. The rest are used and abused by men, flaunting their virility like it’s going out of style. It never will, and that’s the sad reality that both Iteung and Jelita have already reconciled.

However, it’s Cheryl’s performance that particularly stands out as she confronts each fight scene with a bravura that rivals and surpasses her male counterparts. There’s a charisma and a no-nonsense attitude when her character is in the zone. Take her out of it and she gives the film the heartbeat it needs to keep on its more melodramatic threads. Iteung has such an interesting dynamic with the different men in her life and it’s mesmerizing watching her contend with them in a multitude of ways.

As for the action itself, Vengeance is Mine, All Others Pay Cash isn’t flashy. It’s relatively restrained both in terms of its violence and choreography, so don’t expect the visceral flash of other recent Indonesian martial arts films like The Raid or The Night Comes for Us. Simplicity is best here, giving each punch an impact that might be missing with more excess. It also isn’t a movie about fighting, it’s a film about why people fight. A brawl might suddenly break out in a bar or fester over time, but Edwin is focused on the source of that violence.

More often than not, those fights boil down to someone’s masculinity being threatened. At the heart of the screenplay are two people trying to prove something, and they’re doing it the only way they know how: with their fists. Each hit landed brings a level of catharsis that can’t seem to be met any other way. Iteung and Ajo aren’t mean-spirited, they’re just different from the expectations of the world around them. It’s when they try to fall into those expectations that their internal conflicts end up manifesting externally.

Vengeance is Mine, All Others Pay Cash is a resounding martial arts film for so many reasons. Primarily of which is the central relationship: a layered representation of what it’s like to try and thrive in an environment that doesn’t feel welcoming. Where every moment you’re proving yourself to yourself more than you are to others. Maybe it’s being able to fight just as well as the men in your life, or maybe it’s not feeling like less of a man. Either way, the resulting film ends up providing a critique that many action fans will admire for both its execution and its message.