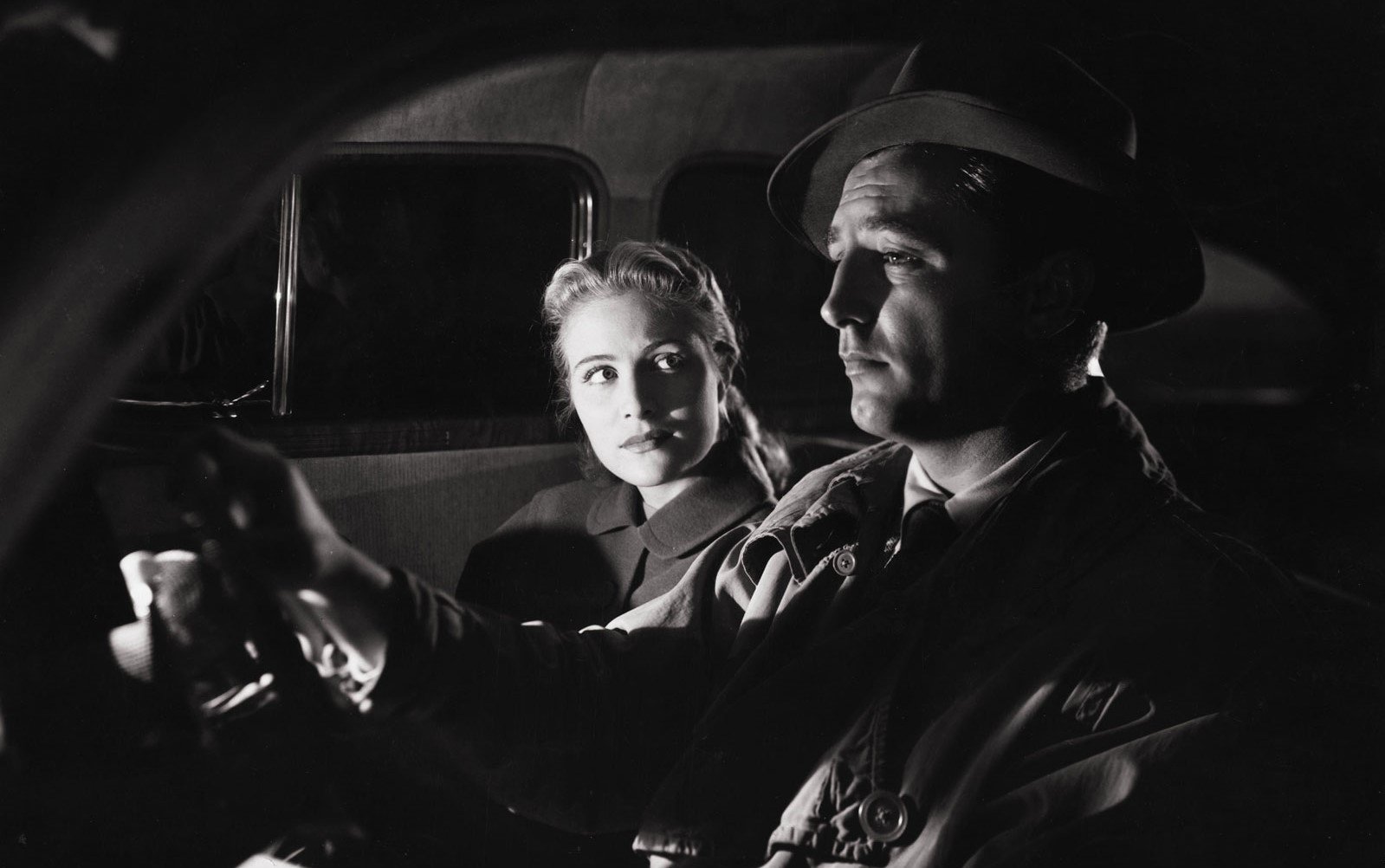 I never saw her in the daytime. We seemed to live by night. What was left of the day went away like a pack of cigarettes you smoked. I didn’t know where she lived. I never followed her. All I ever had to go on was a place and time to see her again. I don’t know what we were waiting for. Maybe we thought the world would end.”

In Jacques Tourneur’s Out of the Past, Jeff Bailey (Robert Mitchum) owns a gas station, in a small California town. He has been courting local girl, Ann (Virginia Huston), despite the disapproval of her parents. Out of nowhere, Jeff’s past comes knocking in the form of a henchman, who orders Jeff to meet with gangster, Whit Sterling (Kirk Douglas). Forced to reveal his true past to Ann, Jeff tells her about his former love Kathie – the kind of woman no man should trust.

Can a man truly ever escape his past? Out of the Past grapples with this question by interconnecting Jeff’s past, present, and future in non-linear fashion. The film begins with Jeff in the present. He hopes to have a future with Ann. Yet soon, Jeff’s future relies on whether or not he can deal with his past. With the introduction of Whit and Kathie, it is clear that Jeff has been stuck in limbo for three years (his temporal present), waiting to see if his time with Kathie and his betrayal of Whit would catch up with him.

The film continues to answer this question of escaping the past with smaller details. The first is the introduction of Joe Stephanos (Paul Valentine), who randomly sees and recognizes Jeff working at the gas station. The implication is that Jeff will always have the same face. He cannot run away from this. Ann’s mistrustful parents also play a small role. Although they are never seen, their distrust of his behavior and past foreshadow Jeff’s inability at redemption. Finally, Jeff’s involvement with Kathie is key.  Femme fatales drag men down with them, whether they like it or not. They are not something male protagonists can ever physically or psychologically (or both) escape from.

However, Out of the Past’s message about escape is more complicated, when taken into the context of 1940s Hollywood. Jeff’s past is his undoing because he has been involved in murder. No criminal – however unimportant – can get away, unpunished, with anything in code era Hollywood. Despite the fact that Jeff has seemingly reformed and owns an honest business, his involvement in his partner’s murder and his betrayal of Whit (though Whit is also not an honest man) are still black marks against him. His association with Whit and Kathie’s corrupt world also drags him back in. Furthermore, it is unclear what Jeff has done in the past, as a private eye. The fact that he has worked for Whit shows that his morals used to be second to his love of cash. When it comes time for justice to be made, Jeff cannot escape this.

Whatever Jeff has done, he is nothing if not a sympathetic character. Most of his involvement with Whit and Kathie deals with Kathie’s lies and betrayal of him. At the same time, Kathie is one of the most sympathetic femme fatales. Her hatred of Whit and wanting a new future are not unlike Jeff’s desire for a fresh start with Ann. The only difference are Kathie’s methods at achieving this independence from Whit. She chooses murder, while Jeff chooses to run away. If Jeff cannot escape his past, neither can Kathie.