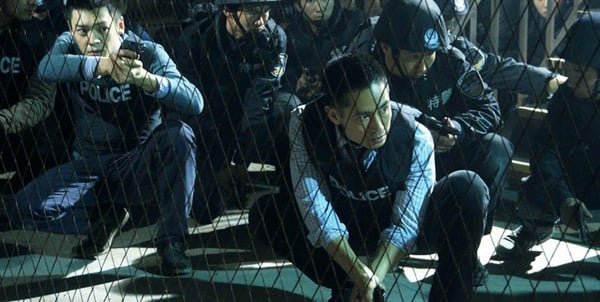 The name of Hong Kong director Johnnie To resonates strongly with fans of hard-edged gangster films and cop stories. For years already he has delivered time and time again with some of the most vivid, gritty, and viscerally charged films that populate the genre. His more recent output has occasionally diverged from the action dramas he built his name on, mainly with 2008’s cape flick Sparrow and 2011’s Don’t Go Breaking my Heart with which he branched out into romantic comedy.

Admirers clamoring for a return to the bolder crime films have their prayers answered with To’s, Drug War, starring Louis Koo as Timmy Choi, a mid-level drug smuggler, and Sun Honglei as police captain Zhang Lei, the man trying to use Timmy’s intel after the latter is arrested early on in the picture, based on the promise that he can help Lei’s team smash a cartel which expands both to mainland China and Hong Kong. Crystal Huang, Wallace Chung also co-star, and the popular Lam Suet are featured in a brief but amusing cameo.

To answer the most pressing question on everyone’s minds, yes, Johnnie To is certainly working here in his familiar ways. At times, Drug War is a wildly entertaining, adrenaline-pumping, tension-filled procedural that follows a special anti-drug unit’s meticulous and extremely risky mission of tracking, infiltrating and eventually attempting to ‘bust’ a major Hong Kong drug ring extending itself through an alarming number of high-level gangster clicks. As with so many of To’s projects, it is difficult to pinpoint a sole reason for why it strikes the right chords, functioning as effectively as it does. Like Martin Scorsese with his own crime pictures, his talents reach far beyond making his films look nice, smart casting, and amusing dialogue. A viewer can be appreciative of a To movie for how intense it might be, said intensity deriving from a no holds barred realism depicting the daily violence and stress involved in a gangster’s or detective’s routines. There is often some fun to be had with a To movie but he will always be quick to remind viewers of the gravity of the story at hand.

Brilliantly on display in Drug War is To’s habitual capacity to lend his films a sense of sprawl without specifically resorting to cliched tropes to make his films feel epic, such as unsubtle dramatic musical cues or overblown scenes of slow motion. Like his two Election movies, Drug War definitely feels like a big movie because of the stunning breadth of characters and intricacies they must wrestle with in order to achieve whatever goals drive them, be they on the side of the law or operating against it. The director takes audiences through a bevy of episodes, each one incurring increasingly high-risk levels for the protagonists. As is aptly demonstrated, there is a relentlessness to their profession which demands they remain on high alert at all times, depriving them of respite and even sleep until the mission is accomplished.

Even though the full-on action set pieces do not erupt until the film’s final stretch, the proceedings are rarely devoid of any tension, with captain Lei and his colleagues putting themselves in peril from one scene to the next. Among the standouts are when Lei impersonates various personalities of the drug world so as to have them all converge for a fake business association, one such incident resulting in Lei having to receive immediate treatment for inhaling too much cocaine. Sun Honglei, playing a character who must successfully con multiple gangsters via the adoption of several completely different personalities, is himself very much a chameleon actor, ranging from completely stoic in one scene and filled with laughter in the next depending on what persona he must inhabit.

Eventually, the guns do go blazing when Timmy Choi, used as an informant by the police for most of the picture, alerts his mafioso brethren of police presence once all the forces have converged for what the villains believe is to be an exchange. What follows is a viscerally powerful ten to fifteen minutes of characters firing pistols and rifles from behind cars and buses in a school zone. To is an action scene maestro, not necessarily because he brings stunning visuals to his scenes, but rather because he has an excellent understanding of the geography of an action set piece and how exactly to emphasize the violence. When someone’s shoulder is blasted with a bullet, it is not overtly graphic yet the viewer really feels it due to the unnerving sound design. The climax evolves from a gunfire exchange where the cops want to overtake the criminals to arrest them into an unforgivably intense, take no prisoners duel to the death.

Drug War has more than enough to offer fans of the filmmaker’s past gritty, intricately layered police and gangster dramas. The director has a gift for bringing out the palpable intensity in such a story in ways that get the audience caring for the characters enough to want to see them make it through alive. To may not always deliver on that specific hope but one can almost always rest assured that the film will be exemplary work from a master craftsman of crime fiction.

For more on Drug War, check out episode #583 of the Sordid Cinema Podcast embedded below.