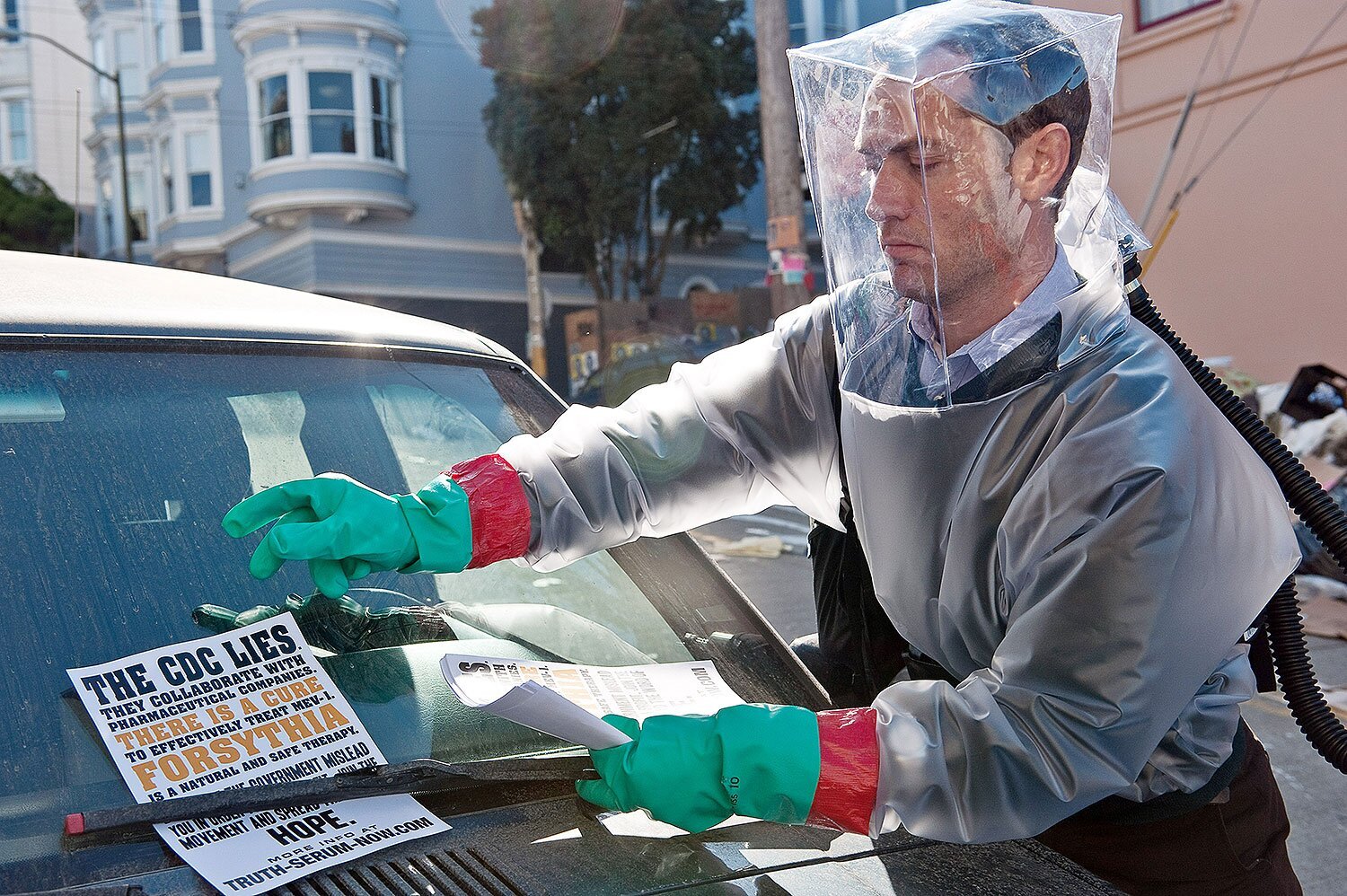 As its title suggests, Soderbergh’s film tracks the inception and spread of an unknown disease throughout the world and the panic, paranoia, and finger-pointing that ensues.  It’s a frightening film, and the far-reaching reverberations and rapidity with which the disease spreads make it all the more so.  Soderbergh and screenwriter Scott Z. Burns take Contagion beyond a simpler Outbreak-type film through a journalistic, detached approach that at times feels more like reportage than fiction.

A series of enigmatic, nearly concurrent deaths take place across the world. Among the victims is Beth Emhoff (Paltrow), wife of Mitch Emhoff (Damon).  Damon’s character is the “man on the ground” in Contagion.  He’s the only uninvolved civilian and one of the most empathetic figures in the film.  Leading the investigation and the race to find a vaccine are Dr. Ellis Cheever (Fishburne), head of the CDC, his new hire Dr. Erin Mears (Winslet), and CDC researcher Dr. Ally Hextall (Jennifer Ehle).

In China, Dr. Leonora Orantes (Cotillard) tracks Beth Emhoff’s whereabouts on the day of her suspected infection, while in England, blogger Alan Krumwiede (Law) stirs up controversy as he attempts to demonize the government through conspiracy-theory blog posts.

While the intertwined storylines are indeed impressive, and certainly bring this film far beyond microcosm and into a full-blown pandemic, they are also a slight hindrance.  Because we are really only given any significant time with two characters – Mitch and Dr. Cheever – it’s difficult to find a real anchor of sympathy. When Beth dies we feel for Mitch.  When Dr. Cheever’s fiancé is attacked, we feel for him.  However, when the disease systematically kills off other characters, some of them major protagonists, the deaths are viewed with a cold eye – zipping body bags and mass graves, no tears.

This is, perhaps, part of Soderbergh’s plan.  Contagion is certainly a thriller, but it’s not a race-the-clock, headlong adventure.  This is a film that values realism and paranoia before its fictional narrative and conventional genre thrills.

Soderbergh’s technique here is dominated by a few stylistic traits that contribute to the detached mood: more wide-shots than close-ups, techno-driven montage sequences, and short scenes that move rapidly from one to the next.  Maybe the largest contributor is his use of text at the beginning of certain scenes to track the evolution of the disease (and devolution of society).  The film begins with Day 1, moves past Day 100, and then ends again with Day 1 when the source of the disease is revealed.  These numbers, functioning as a countdown of sorts, further the cold feel, presenting it as a report that could well have been published by one of the CDC characters represented in the film.

Burns and Soderbergh have targets.  There are people to blame.  Through the constant merging and concurrent narrative threads big business, Wall Street, the shadow of governments and the blogosphere are all demonized as power-mongering, greedy entities.  Yet, writer and director are careful to humanize individuals and, with the exception of Law’s Krumwiede, who himself is representative of the power and danger of the Internet, most of the blame is laid at the feet of faceless bodies.  Even when Dr. Cheever goes selfishly beyond protocol to warn a loved one of an impending quarantine his actions are still ultimately condoned, and he redeemed.

Contagion’s power lies in its ability to effectively characterize a massive chain of cause-and-effect.  From the small (touching a glass) to the large (mob riots), the film posits that the infrastructure and moral code that our world relies on is flimsy.  It is optimistic in its view of those selfless individuals who rise above the hysteria, yet remains cautionary with its final, circular images.