If there’s one thing that Drew Goddard loves, it’s a puzzle. The solvers aren’t always the same, however; in The Cabin in the Woods (2012), it was the audience unraveling the film’s conceit, whereas in his screenplay for The Martian (2015), it was the protagonist solving the puzzle of his own survival. For Bad Times at the El Royale, Goddard’s second feature as a writer and director, he has attempted to draw another puzzle, but this time he fails spectacularly. It’s a film that never rewards his cleverness, with a mystery that doesn’t compel (and is ultimately inconsequential). If The Cabin in the Woods was a smart genre deconstruction, Bad Times wants to do the same, but ends up being little more than a bloodless, overly long Tarantino rip-off.

Like his earlier quasi-horror film, Bad Times opens with a group of people drawn together for uncertain reasons. There’s a Catholic priest, Father Daniel Flynn (Jeff Bridges), who seems to suffer from memory problems and is rather loose with the traditions of his order. There’s a singer with a mellifluous voice who has already used up most of her chances in the music industry (the excellent Broadway actress Cynthia Erivo, making her film debut). There’s a vacuum salesman whose southern accent tends to fade (Jon Hamm). And there’s a nervous bell boy, burdened with secrets belonging to himself and to others (Lewis Pullman).

This ragtag group meets at the El Royale, a nearly abandoned motel that sits on the California-Nevada border. The building is split down the middle, with different painting schemes for each side. The Nevada side is a bit cheaper, thanks to lower taxes, but guests on the California side can drink at the bar.

The motel, which is based on a real establishment that was once owned by Frank Sinatra, is a fascinating idea, one that could lend itself to many different stories, but Goddard is only interested in convoluted mysteries that take ages to get to the bottom of. Complicating things further is the fact that some of the guests have checked in for completely legitimate reasons, while others have far more nefarious purposes. Goddard’s conspiracies are far-fetched enough as it is, but his reliance on coincidence pushes the film into the realm of parody. 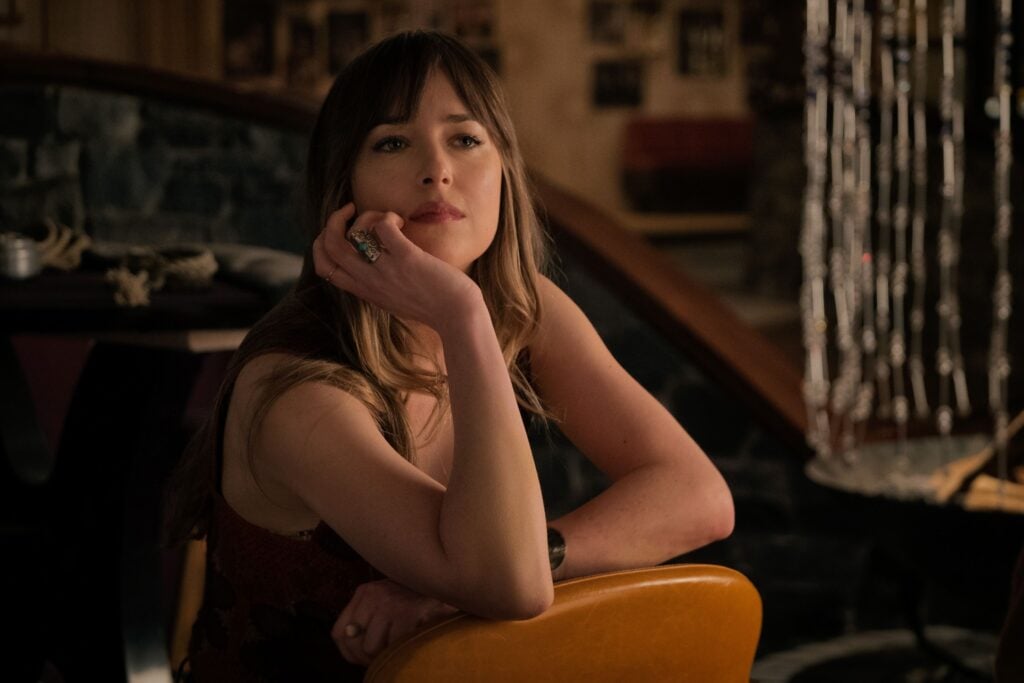 The story is set in 1969, a period that wisely allows it to be a bit fuzzy on decorations and mannerisms. Despite the long influence of hippies and the counterculture, most of America, even California, was still as conservative and buttoned-up as it had been ten years earlier. In a later year, one of the guests might have realized something was up and brought that to the attention of the management, but politeness and a desire to avoid conflict still reign in 1969.

Some of the motel’s secrets are revealed when a late check-in arrives: a woman on the run (Dakota Johnson) with her younger sister (Cailee Spaeny). The younger girl has been rescued from a new-age cult led by a far-less-charismatic-than-he-needs-to-be Chris Hemsworth. The cult subplot threatens to overshadow the film’s other mysteries, with little to gain for it. Hemsworth, usually a hopelessly dour actor, seems enlivened here, perhaps by the recent comedic turn his longtime Thor role has taken. Unfortunately, Goddard hasn’t written a role that’s anywhere near as fun as Hemsworth wants it to be, and he’s never believable as someone who could make impressionable young women give up everything in their lives, nor as someone who would even be drawn to that kind of malignant power.

Goddard loves having his characters do long Tarantino riffs, but he doesn’t get that those long speeches only seemed like they were about inconsequential things.

The other less flashy roles are more successful. Jon Hamm has yet to find a film role whose power can match that of Mad Men’s Don Draper, but for a brief period it looks as if he has at least found something fun and exciting to do. Unfortunately, the unwieldy size of the cast quickly dashes those hopes, and Hamm is lost among other characters, then slotted with an uninspiring arc. 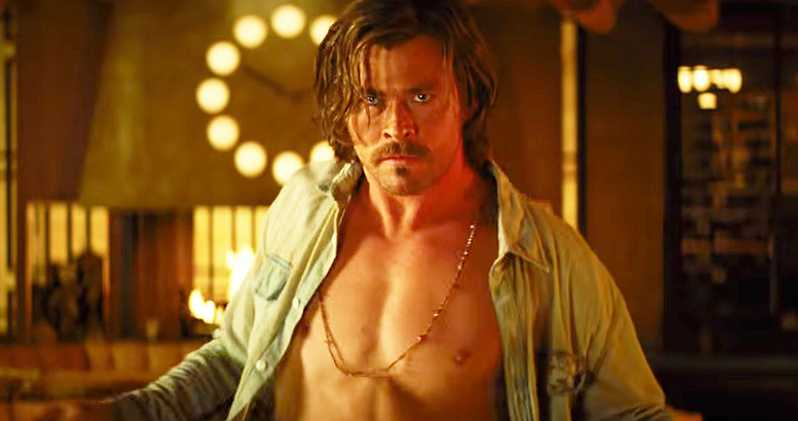 Bridges’ part is more successful, but it’s mostly due to him coasting on folksy attitude and charm; he’s playing latter-day Jeff Bridges rather than the actual character (replete with the requisite latter-day Jeff Bridges beard). Johnson, who is capable of showing off some serious acting chops when she’s not in a movie with the word “Fifty” in the title, is also lost in a sea of other characters. Hints about her past suggest a fascinating backstory, but the film is either uninterested in revealing it or couldn’t fit it into the already overstuffed two hours and twenty-one minutes. Goddard loves having his characters do long Tarantino riffs, but he doesn’t get that those long speeches only seem like they are about inconsequential things; at their best, they’re stealthily important, unlike anything in Bad Times.

The film’s one saving grace is Erivo, who gives the cold movie a blast of warmth. She’s a talented singer, and Goddard wisely allows her multiple chances to show off her musical abilities. Despite Bridges’ top billing and living legend status, it’s Erivo who provides what little heart the film has.

Still, it’s not quite enough. Bad Times at the El Royale tries to stuff at least two, maybe three different films into a single story, all of which suffer. Perhaps because of the unexpected critical and financial success of The Cabin in the Woods, Goddard thought he had to make another puzzle movie, but there’s really no puzzle to solve. There are mysteries, but they’re fairly straightforward and only become convoluted because of his overstuffed cast and multiple storylines.

There could have been a simple, and maybe even great, film noir made from the bare bones of Bad Times at the El Royale. Maybe there was no one willing to say no to Goddard after his previous successes. But his hubris has resulted in this mess of a film, quite accurately described as a bad time.

‘Apostle’ Finds Its Own God to Fear