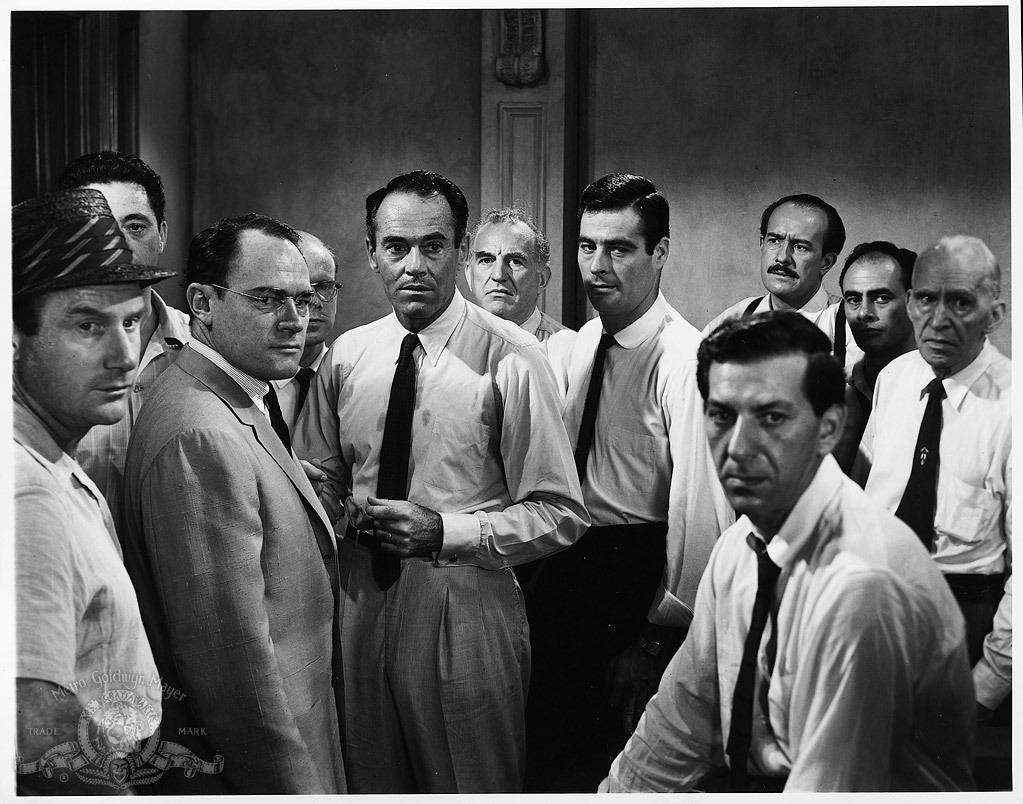 Sidney Lumet’s courtroom drama still simmers and pops with tension. 12 Angry Men takes place in a single room, with a jury who must make a unanimous decision on the sentencing of an 18-year-old youth with a murder charge. A guilty verdict means the electric chair.

The stakes are high, yet much of the power of the film comes from the unwillingness of many of the jury to recognize the severity of their task. One member is impatient to deliver a quick verdict to get to his baseball game. Another holds deep and vindictive prejudices. Many are quick to anger. The film thrives on these conflicts.

We begin with one juror’s (Henry Fonda) vote of ‘not guilty’ against the view of the eleven other jurors. The others are openly antagonistic. He is outnumbered. How could he argue for a ‘not guilty’ verdict when the evidence against the youth is seemingly watertight?

The plot unfolds like a Sherlock Holmes-style mystery, with a dash of communal experimentation, as the other jurors are persuaded by our protagonist to critique each and every bit of evidence against the accused. We are reminded that a ‘guilty’ verdict should prove the crime without any ‘reasonable doubt’. As each portion of evidence is tested and found to be on shaky ground, this reasonable doubt begins to slowly settle on the room.

Fonda’s juror is the voice of compassion, charismatically, and mostly calmly, reminding the other jurors of the stakes of their decision. His attentiveness to the facts of the case and his willingness to open the floor to discussion makes him a quietly powerful presence. The other jurors are equally compelling: one whose family issues get in the way (Lee J. Cobb) and another who is only interested in the baseball (Jack Warden) both bring a fantastic degree of conflict to the plot. The whole cast is stellar: this is perhaps one of the best ensemble casts in film history.

As the day progresses, the group re-casts their votes at intervals, serving as a real-time tracker of who has been swayed to the other side. Predictably, yet with an incredibly satisfying momentum, one-by-one each of the jurors is persuaded by Fonda’s protagonist to vote ‘not guilty’. Each vote count reveals the turning of the tide in increments, providing a great weight to the changing of each character’s opinion: all the twelve characters are given their moment to shine. And, of course, each is given their moment to rage.

It is a testament to Lumet’s direction and Reginald Rose’s writing that all twelve of the jurors feel distinct from each other. Each has their own life experiences, virtues, and prejudices that they bring to the table. Like it or not, these differing individuals must clash to reach a conclusion, must fight past their anger, and give in to the voice of reason.

In a modern age characterized by never-ending dissent and political conflict, it is refreshing to watch a film with a decidedly humanistic outlook. 12 Angry Men enacts a space where reason and compassion prevail in the face of obstinacy and ignorance. Perhaps a fantasy, but a cathartic joy to watch all the same.

The Cabin in the Woods at 10: Celebrating the Film Through its Ten Greatest Monsters