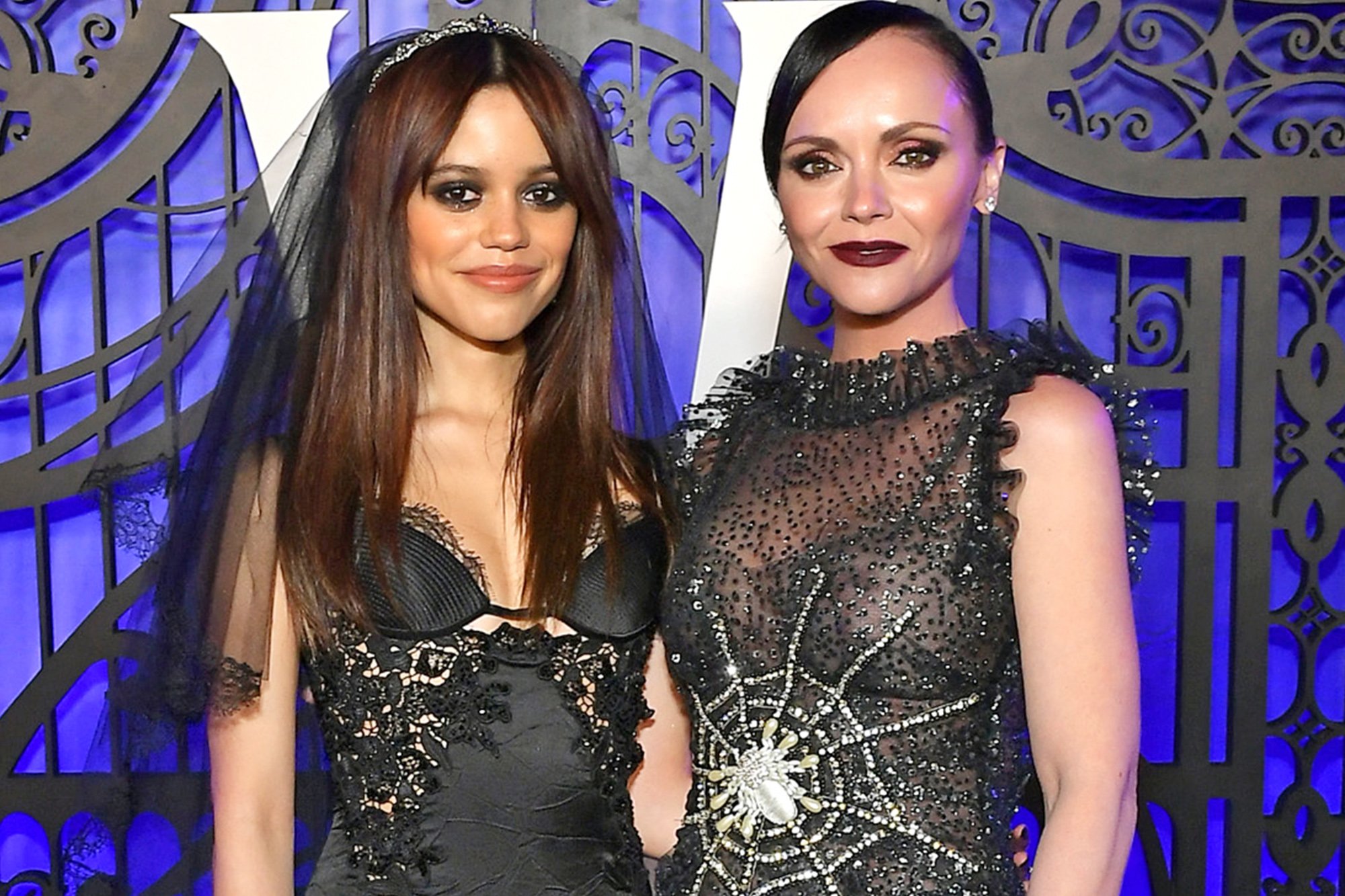 Netflix’s Wednesday is breaking records, earning 341.23M hours viewed in its first week, surpassing the fourth season of mega-hit Stranger Things. It reimagines the most sarcastic member of the Addams clan as a supernatural hero unraveling murder mysteries at Nevermore Academy, a school full of mystical kids. Jenna Ortega steps into the role of the so-over-everything teenager. Christina Ricci, who nailed the role in 1991’s The Addams Family and 1993’s Addams Family Values, is also involved with a very meaty cameo role.

The pair said they didn’t trade notes on the performance. While there are obvious similarities, this incarnation is more action-oriented. Ortega told MTV News it was very important to do her own version of the beloved character.

“I think when (Ricci) was on set, neither one of us said Wednesday once to each other,” Ortega said. “I don’t think she wanted to get in the way of my performance and feel like she was overbearing.. I felt like I didn’t want to pull up something that she did 30 years ago. For the sake of my own benefit, but two, I didn’t want to rip her off and be too much like her.”

The type of show also gives Ortega some breathing room in that aspect. This version of Wednesday has as much in common with Buffy The Vampire Slayer as it does with any previous Addams incarnation. After getting kicked out of several schools for well-being herself, she sees Nevermore as just another facility she’ll escape from. While planning her getaway, she bangs out a manuscript for a detective novel. But a real murder mystery breaks out in the school’s halls, pressing her into sleuthing service. Aiding in these endeavors are psychic visions, a gift Wednesday learned she inherited from her mother Morticia, Catherine Zeta-Jones in a role she was born to play. She quickly develops her own “Scooby Gang” including disembodied hand Thing and her werewolf roommate Enid. Creepy, kooky, and altogether ooky, indeed.

Ortega is having so much fun with this unique goth girl. Her routine at a school dance to Goo Goo Muck by The Cramps instantly went viral, garnering 15 million views and numerous impersonations, including Mother Monster herself, Lady Gaga. Ortega choreographed the whole thing and filmed it while battling COVID-19. Wednesday truly dances like no one is watching, even when everyone is.

It follows a long tradition of dance-based gags for the Addams family. In the 60s sitcom that first adapted Charles Addams’ cartoons, Wednesday taught butler Lurch how to dance. Anjelica Huston and Raul Julia also showed some memorable moves in the 90s flicks.

Though she has evolved into a full-fledged superhero in this version of the mythos, Wednesday has always been a rabble-rouser. Both Ricci and Ortega’s versions of the character have a soft spot for the underdog. The incident that got Wednesday sent to Nevermore was avenging her brother Pugsley after a group of bullies stuffed him in a locker. Her visions allow her to find out it was the swim team, causing her to unleash a couple of handfuls of piranhas into the pool. She reminds the bullies that nobody tortures her brother – except her. At Nevermore, she befriends Eugene, a shy boy who, before Wednesday arrives, is the only member of Nevermore’s Beekeeping Club. She explains to Eugene that he reminds her of Pugsley, except for that need to torture him.

Who could forget Ricci’s Wednesday going hilariously offscript in her camp’s Thanksgiving play in Addams Family Values, warning the audience and the Native Americans that the Pilgrims are not to be trusted? Showrunners Alfred Gough and Miles Millar of Smallville fame certainly didn’t, as the final episodes are one big, long Easter egg for that moment. Netflix’s effort calls back to it with Jericho, a town that is a little too obsessed with its heritage, building a Medieval Times-style attraction called Pilgrim World. There’s also a Pilgrim festival honoring the town’s founder, Joseph Crackstone. As it turns out, he attempted to burn Wednesday’s ancestor Goody Addams, and many other people he deemed “outcasts” alive. This starts a family feud between the Addams and Crackstone descendants. With this being a supernatural Addams Family adaptation, Goody of course really was a witch, but the nice kind.

Spoilers for Wednesday past this point!

Ricci portrays Marilyn Thornhill, the only “normie’ teacher at Nevermore Academy. She relates to Wednesday because she feels like an outcast at the school. She’s too weird for normal mortals but not weird enough for the vampires, werewolves, and other assorted creatures of Nevermore. At first, she seems like a perfect mentor for the hero.

But then, in a last-second swerve, Thornhill is revealed as Laurel Gates, the last surviving member of the Crackstone family. She has been controlling a Hyde, a murderous monster that spends most of its time in human form. Their true nature can be revealed through chemistry (ala Dr. Jekyll) or hypnosis, which initially led Wednesday to suspect her court-appointed therapist Dr. Valerie Kinbott. Ricci’s Thornhill looks to be concerned Wednesday is going to get herself or someone else killed. In fairness, Wednesday does almost get murdered and Eugene ends up in the hospital. But after the reveal, viewers realize she really just wanted Wednesday to stop putting the mystery together. Ricci hasn’t lost her touch at playing lovable outcasts. The role is a treat because in most of these cases, a cameo from the original actor is just that. She hasn’t officially been written off the show’s canvas, either. After Thornhill/Gates’ scheme is exposed, it isn’t made clear what happened to her. So Ricci could return to cause more problems for Ortega’s Wednesday at some point.