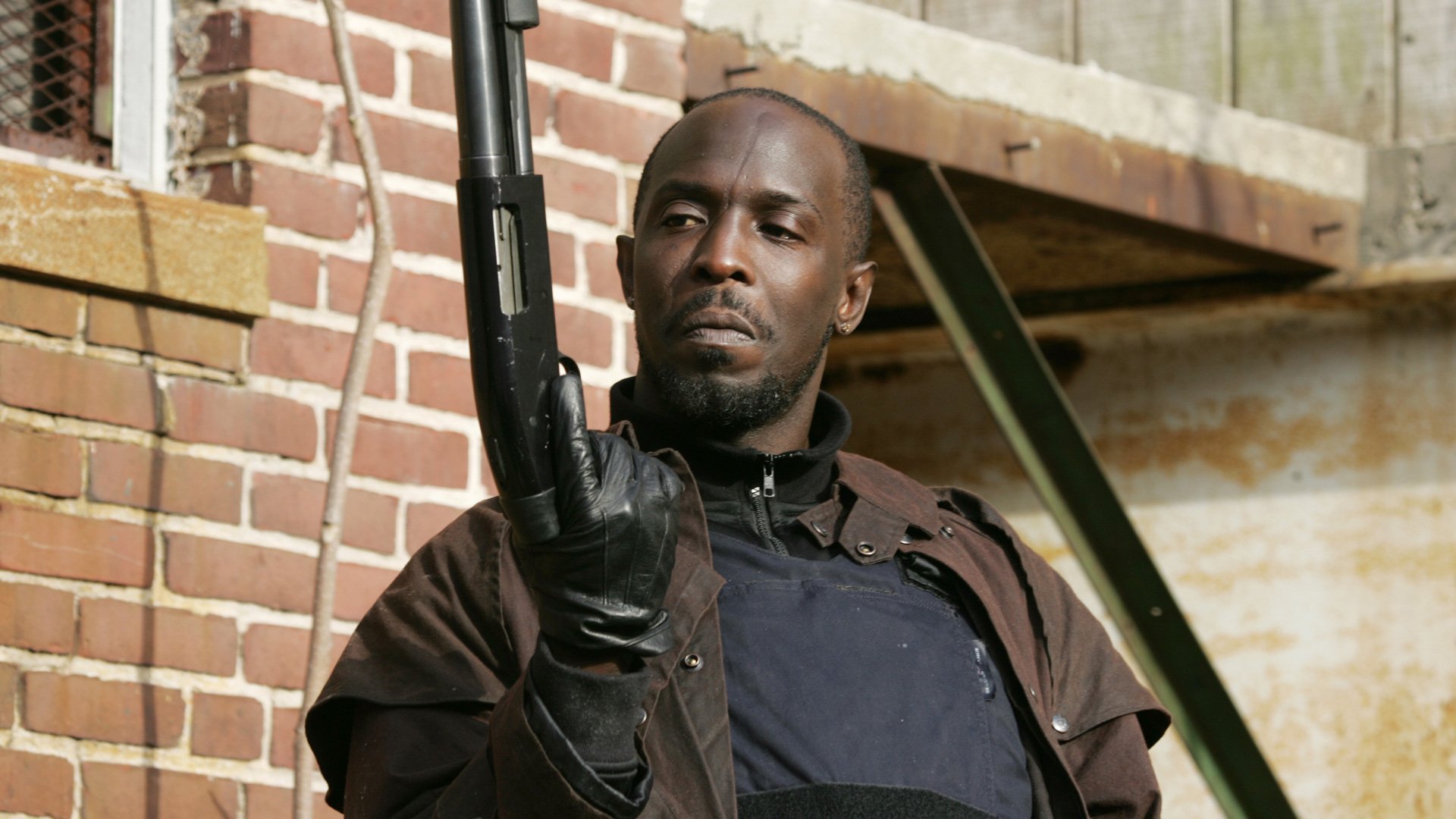 The Wire premiered on HBO on June 2nd, 2002 with an episode titled “The Target.” The scene begins with McNulty sitting with a witness to a murder that took place. McNulty asked the witness why they let someone they knew would rob them participate in their game of Craps. The witness responded “this America man.” This line fits as the backdrop to a realistic look at the social issues that plague, not only the city of Baltimore but the United States of America. David Simon provides us with his view of the drug trade, dock workers, inner-city youth, and the Newspaper Industry in a gripping five seasons. The show is packed with detail. The series rhetoric manifests characters that drive the story. Simon allows the audience to assimilate to the world through his portrayal of original dialogue, memorable characters, and an illustration of social issues that are still relevant to today’s climate. The Wire is crafted like a chess match. The pawns represent the dealers in low rises run by the King and his muscle. This seems to be a constant theme throughout and one of the many pieces that make The Wire an engaging piece of realism. It grabs and makes you part of “the game.” The game is represented by the American Dream, a dream which has a different meaning for each character.

Created by David Simon who initially wanted to create a police drama based on the experiences of his co-writer on the show and previous homicide detective, Ed Burns. Ed Burns experienced a lot of bureaucracy with the Baltimore Police Department which led Simon to create the police drama. What became of this idea was a masterful setpiece on social issues that goes deeper than just the Baltimore Police Department. The show was produced by Blown Deadline Productions, who has also produced Simon’s other works like Treme, Show Me a Here, Generation Kill, and the upcoming series about the 70’s, and 80’s porn industry, The Deuce. Prior to The Wire’s creation, Simon was a police reporter for The Baltimore Sun. His experiences as a reporter led him to become a novelist and create, what became the precursor to The Wire, The Corner.

Simon created a realistic visual for the audience thanks to Robert F. Colesberry. He was a Producer/Director who worked with Simon on The Corner. Their collaboration provides a vivid view of a city torn by the prevalent drug trade and high murder rate and by those governing the city itself. They provide viewers with different perspectives from the junkies all the way to the Mayor. When a new character is introduced in the series, the viewer gets to know them by their actions, choices, and ideology in what they define as the American Dream in this “rigged game” everybody must play to survive or reach their self-serving agenda. Simon allows viewers to formulate an opinion of the character before introducing them by name. At first glance, Simon’s depiction of social issues is futile due to a lack of direction on how to improve the issues that face the city of Baltimore. However, viewers come to realize that a latent function of the characters depicted in the show illustrates the vital people necessary to evoke change. He set out to show the dysfunction of the institutions that teach children, and govern the cities, and how that dysfunction affects everyone in the middle.

Over 60 episodes and 5 seasons Simon captures each story with visual detail that sticks in the mind of the viewer. He introduces flawed characters, yet makes the viewer feel compassion, even when the viewer despises the character. Even if minimal compassion is felt for Marlo and Snoop, I doubt any viewer caught in the web of The Wire will ever forget them. The passion is felt in the dialogue of this series. There is a lot of esoteric language used by law enforcement and those involved in the drug trade that over time becomes clear to the viewer. That is all thanks to Simon’s experience as a writer and passion for the corruption in those who govern society. He wanted to put together social commentary that told the truth, not sugar-coating it. He wanted to speak on the topics that truly affect the world he lives in and not just tell the stories people are comfortable hearing.

The Wire opened a lot of opportunity for Michael K. Williams, who plays the iconic Omar Little. Omar’s character is based off 4 separate “stick-up men.” One of them named Donnie Andrews plays a small role in assisting Omar while he is in prison. Omar makes his living off robbing drug dealers and is known for his shotgun and facial scar. He is feared on the street and makes his presence known by whistling “The Farmer in The Dell.” He spends his Sundays bringing his grandmother to church. Omar follows a strict code, as one should in his line of work. He contradicts the norms of masculinity on the street due to the fact that his sexual orientation is not the same as those he steals from. He is the Robin Hood in The Wire. Omar represents a vigilante on the streets and serves as the anti-hero of the series. Despite his demeanor, Omar is a man who loves deep, as we see with his grandmother and boyfriends. He does not see the wrong in what he does because he gives back to those in need as a compensation for a corrupt political structure failing his city. He delivers each line with his raspy voice and sharp wit. He embodies each moment on screen with the ease that we see in some of today’s greatest screen actors. His confidence is unclouded, his lack of fear is terrifying, and his complexity is one of the most engaging things about The Wire.

Some of the other characters that are heavily discussed by followers of The Wire include Bubbles, Bodie, and Stringer Bell. Bubbles, played by Andre Royo, is one of the junkies on the series. He brings a deeper understanding to the world of a junkie and informant. He makes all his moments on screen his own by providing a street knowledge to being homeless and passes it along to those in the streets. Bubbles teaches young junkies about the lifestyle and attempts to keep them from harm by showing them tricks of the trade. His moments of sadness and pain are captivating, yet he maintains constant optimism despite his position. He is the President of junkies in David Simon’s dark depiction of Baltimore. Bodie plays a solider or “pawn” for one of the main powers in the drug trade. He plays someone whose only option is the drug trade, but maintains constant loyalty to his superiors. He is guile when it comes to his business and is respectful to those above him in the game. Stringer Bell, played by Idris Elba, is the right hand to Avon, the head of the Barksdale crew. He runs the storefronts and the money for Avon. In Stringer’s spare time he takes economics classes at the local community college to learn about what it takes to run a legitimate business. Simon sets up Stringer’s character differently than the rest of the member of Avon’s crew. He dresses him differently to fit a different mold and gives him aspirations beyond the street. Idris Elba embraces the character. You can see in his demeanor that he believes he is more intelligent and wise than his counterparts. He portrays a man who sees the business as a way out of the game, not a way of life. Other characters who have garnered a lot of attention include Proposition Joe, Slim Charles, The Bunk, and Jimmy McNulty. These characters are viewed as some of the most memorable screen characters American television has to offer still 20 years later.

David Simon takes advantage of every moment in The Wire. His framing techniques are exceptional, whether it is the way he stages his characters or the angle in which his characters’ attack, like chess pieces in a match. The technique in which he shoots The Wire feels like a chess match. Where the characters move, the way they attack their opponents, and the way they die is all intentional and is an example of the next move in the game. The way Simon uses the city of Baltimore as a backdrop makes the visuals more real. The city itself is a character. The city deteriorates overtime the same way the people do and Simon wants us to see it. You can’t help but sing the theme song, even though the singer and production of the song is different in each season. Each opening per season is a montage of what the viewer is going to see and the shift in tone is conveyed by the song in each season.

Simon chooses not to constantly remind viewers of events that occurred in the past with an assortment of flashbacks. You are forced to pay attention. Many important moments in this series happen around the action forcing the viewer to pay attention to the entire frame. That is one of the things that makes this show so complex and engaging. Simon is not setting out to guide you through the game of The Wire, but to give insight that cannot be absorbed without the full attention of the viewer. “All the pieces matter” and just like those surveillance tapes, DNR’s, and wire taps that the Police must pay such close attention to, Simon expects the viewer to give the series the same attention. In its infancy, The Wire was criticized for its drawn-out plot, but in order for the effect Simon wanted on the viewer to take place, it needed the detail it had, and the patience it took. The critical response to the series was extremely positive with continued praise throughout seasons 2-4 and a small drop off during season 5. While season 5 of The Wire wasn’t as highly regarded as its predecessors it still received a lot of praise. It was also necessary for Simon to capture the bureaucracy and decline that the newspaper industry faced, but also how that decline and the crime in Baltimore correlate.

Over the last 20 years, The Wire has increased in viewers not only because of the praise social media has given it but because of its continued relevance in today’s society. David Simon crafted a body of work that is unmatched because it uses realism in a way that no other series has and has shown how far a series can go in terms of structure, story arc, and visual subtlety. He created something where the viewers and the characters are meant to have the same experience because they are living in the world they observe and experience. It is regarded by many as the greatest television series ever broadcast and remains a pivotal piece of television history. “The game is rigged,” and The Wire will never age.