When you even begin to talk about a show like The Wire, you can’t help but open up about ten separate cans of worms. As a basic function of its evolving premise, The Wire morphed over its 5 year run to cover everything from how the drug trade permeates just about every facet of society, whether we like it or not, to the way that journalists are, in some ways, the only ambassadors of truth that some of us will ever meet in the public arena, regardless of their credibility.

If the above run-on sentence is already making you dizzy, then you’re getting the idea: The Wire is not the kind of show that many of us may be used to watching in a slightly more modern world. This is not a show where you can carry on conversations with your significant other, text with friends, or do a bit of cleaning while you watch. I urge you to try though, just so you can see how lost you feel after about 5 minutes have passed, and you literally have no idea what’s going on.

The Wire is the kind of frustrating show that requires every ounce of your attention. It does not spoon-feed you plot threads, it does not set up its twists with elaborate musical cues, and it does not go out of its way to explain what’s going on to the viewer, at all. Though these features can make The Wire a very daunting, even intimidating, series to sit down and watch, you will ultimately find yourself rewarded with a sprawling, all-encompassing, one-of-a-kind, story of stories, should you accept its challenge.

Wall-to-wall, the ever-growing cast of The Wire is filled with increasingly nuanced and carefully developed characters.

Should you accept this lofty quest, you’ll find yourself at the beginning of this journey, as so many have before you. To look at the genesis of a show like this is a very strange prospect, as the early tale of Baltimore’s best and brightest in law enforcement teaming up to take down a drug kingpin is but a microcosm of what The Wire ends up being about. However, it’s certainly as good a place to start as any, with characters like the wise and calculating detective, Lester Freamon, the suavely intimidating drug trade adviser, Stringer Bell, the coldly competent copper, Kima Greggs, and the surprisingly charismatic stick-up man, Omar Little, as your company.

These characters, and a host of others will become your throughlines for this dense and complex city and will remain as lighthouses to focus on, even as the oceans of this series ebb and flow in other directions. Here, at the start, the titular “wire” is of utmost importance, as much of the focus of the drama centers on the Baltimore PD’s attempts to shut down a major player in the drug trade, Avon Barksdale, via a wiretapping operation.

Now, as unexciting as a bunch of people sitting around listening to conversations might sound, The Wire does have a lot to offer, even early on. Much like its similarly challenging HBO brother, Deadwood, The Wire is the kind of show where there are about 6 different things going on at any given time, even when it seems like no one is doing anything.

This is of particular note in its second, and possibly weakest, season. Taking its characters and refocusing them on a shipping container full of dead, human-trafficked, sex workers might sound intriguing in principle but the hoops that The Wire jumps through to make this happen, and it’s laundry list of hard-ass, blue-collar stereotypes, make this storyline a bit of a slog, even if it does pay off in occasional dividends.

Though the second season of The Wire starts off with a compelling mystery, the central story fizzles out long before the season concludes.

Either way, this is The Wire at its most confusing and forgettable, with key characters and plot beats only being referenced sparsely in the remainder of the series.

On the plus side, we’re on to the third season after this, and, with it, a beautifully crafted story of one man trying to fix the problems of an entire city. Major Bunny Colvin finds himself lambasted with one problem after another, all stemming from the drug trade, and in a moment of desperation, concocts a brilliant plan to legalize drugs in a sort of safe zone, where their effects would be focused, thereby minimizing their toxic effects on the rest of the city.

It’s one of the best seasons that David Simon’s seminal HBO drama ever produced, and an awe-inspiring challenge to the ongoing farce that the so-called “War on Drugs” has become. With real-world precedents as its guide, The Wire explores, in painstaking detail, how the very criminalization of drugs creates a host of other problems, and how a certain level of decriminalization could alleviate these symptoms.

The coldly detached Marlo Stanfield and his chillingly effective lieutenants, Chris and Snoop, are a force to be reckoned with in the final seasons of The Wire.

The season that follows, the fourth, is almost certainly its best. If you ever found yourself wondering how a sweet young kid with a passion for learning can get pulled down the rabbit hole of the drug trade, this set of stories breaks it down in almost stomach-churning detail. As the Baltimore school system is introduced to the fabric of the city, we see how “corner boys” get pulled into the criminal world at ages as young as 7 or 8, and how drug-addicted parents destroy their children without even trying. Synonymous with these plot threads, season 4 also focuses on a new player in the drug trade, Marlo Stanfield, who will use utter ruthlessness to murder his way to the top.

This is the show at its most heart-wrenching, with plot developments like a sensitive young boy embracing the drug trade to avoid being picked on for his intellectualism, or a kid talking to the cops about a murder he witnessed, only to be sent to a foster home, and beaten by his fellow charges for being a rat.

The hugely divisive 5th season closes the show out but its level of success is still hotly debated today. The main plot threads focus on a Baltimore newspaper, and its ethics of journalism, and series central character Jimmy McNulty’s attempts to create a serial killer by tampering with evidence at crime scenes. Regardless of how you feel about the final season’s main focus, there’s still a lot to love, as achingly long plot threads like the rise of Marlo Stanfield and the political aspirations of Tommy Carcetti are paid off at last. while characters like Omar Little and Jimmy McNulty get appropriate send-offs. 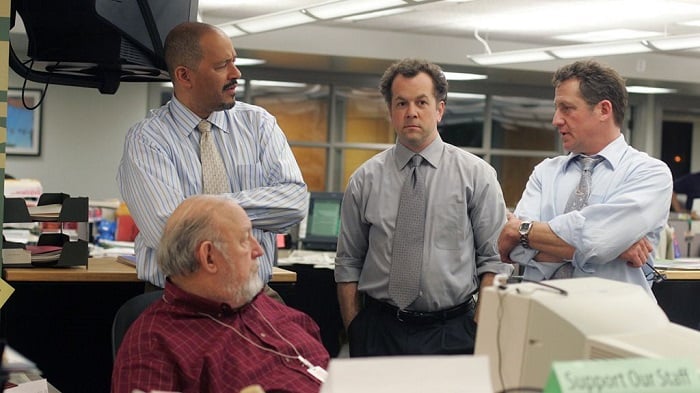 The final season of The Wire remains hotly debated even today, with some fans even encouraging folks to quit after season 4.

As a vivid picture of how a city lives, operates and dies, The Wire is unprecedented television, and it still holds up remarkably well, even to this day. If you’ve already watched through the series, you’ll know I’ve barely scratched the surface of what this show is, and how it moves with such fluidity through the lifeblood of one of America’s murder capitals (St. Louis has pushed the city to second place as of 2016.)

If, on the other hand, you’re reading this spoiler-free outline of the series as a newbie, and find yourself even remotely intrigued, I would encourage you to sit down with an HBO GO subscription and see what all the fuss is about.