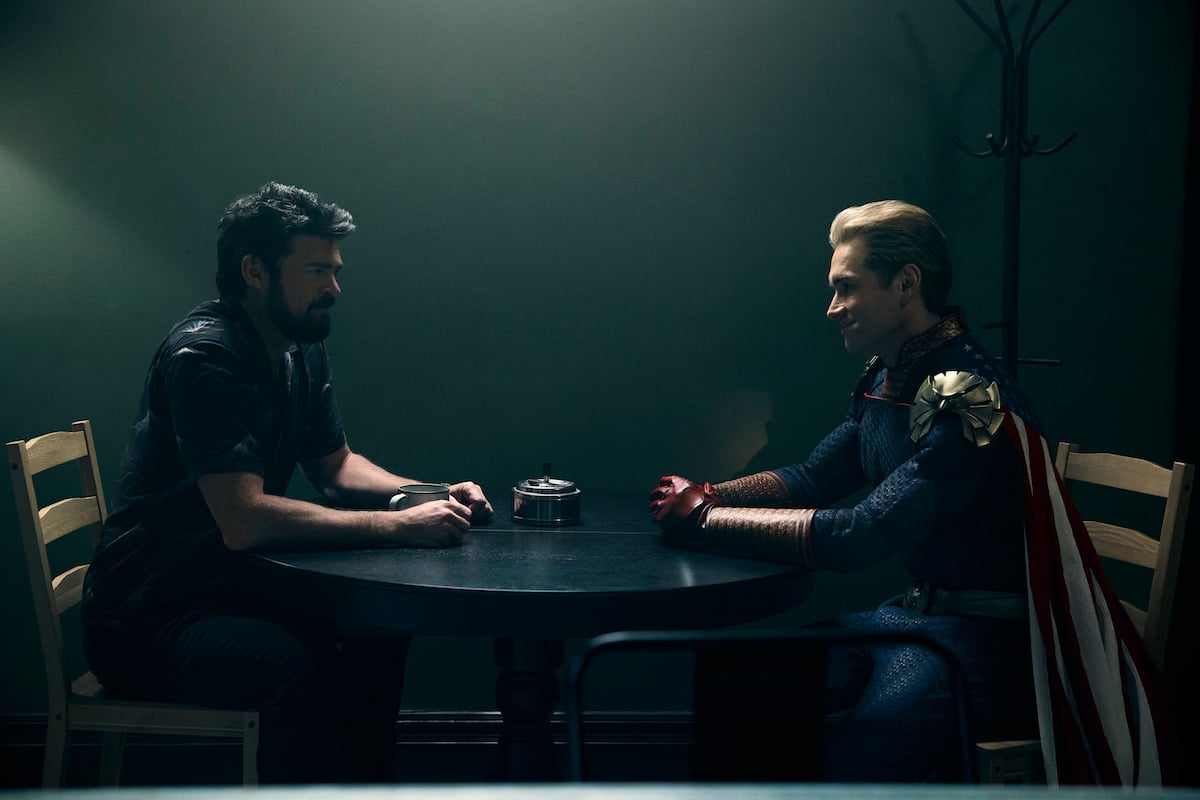 In the twenty months since The Boys was last on air, it seems like reality’s skewed even closer to the dystopian nightmare of Amazon’s bloody, brazen comedy than even the most cynical of us might’ve expected. After all, the calm, sanitized surface of “Payback”, The Boys predictably explosive third season premiere, suggests everything’s gotten a bit calmer and more logical since Nazi movements made their way back into the mainstream in a violent way. But as the premiere digs its nails further and further into Homelander and the many people in his orbit, The Boys reminds us that the world is ugly, bloody, and unforgiving – except, of course, for the war profiteers of the world who sneer in the faces of gods.

It’s certainly not a stretch to call The Boys a series that tries to be somewhat analogous to our current sociopolitical climate – but perhaps what is most striking about “Payback” is how effortless it slides us back into its only-slightly warped world of superhero worship – except in this world, tweeting shit about releasing director’s cuts serves as a social shield for a Superman who hates humanity, of course.

In the past, that rampant cynicism has felt antithetical to its ability to build characters worth caring about; but with a well considered new outlook on its characters and setting, “Payback” feels like a different, sharper version of The Boys, one that doesn’t need to rely on two-dimensional reflections of our world to fuel the only mildly interesting stories of its own.

Opening a year after Stormfront’s defeat at the hands of the Boys, Starlight and Maeve, “Payback” opens on a world where its superheroes have been thoroughly cucked into nothingness by bureaucracy – part of which is led by head-exploding Gloria Neuman’s Bureau of Superhero Affairs, where the Boys (minus Mother’s Milk) now work as tax-funded hall monitors for superheroes. The whole ‘Stormfront thing’, as much as Homelander wants everyone to forget, has changed the world a bit; while groups of Nazis have turned her into their banner head, they’ve also turned superheroes into an obsolete business – at least, in the eyes of Stan Edgar and the heads of Vought.

While Stan is pitching a temporary version of Compound V to the government, he’s planning to just get out of the superhero business; why would you just give superpowers to someone permanently, when you can control the very supply and demand of superheroes in the form of a $2 million pill that lasts for 24 hours? Though we – and Maeve – can already see the absolute insane endgame of this, it makes perfect sense for Stan; what would you rather do, clean up Termite’s mess or sell pills to the military?

Homelander, of course, is too butthurt to see anything but the shadow cast over him by society. Though he’s got some form of The Seven back, Homelander has clearly not sucked a titty and had a nap in a very long time. His son is hidden from him, his power is being stripped from him by silly little humans – and worst of all, his girlfriend still won’t spouting off the Nazi shit that felt like a parody in the episode’s opening scene (a climactic moment from the fictional film The Rise of the Seven, featuring Charlize Theron as Stormfront). And boy, does Antony Starr eat it the fuck up; even when The Boys floundered its way through early episodes, the barely contained, adolescent male rage of Homelander is uniquely portrayed by the former Banshee star – and in “Payback”, Homelander is smoldering, which Starr leans into with fearlessness, making Homelander so uncomfortably self-righteous, that can shift from sadness, to anger, to furious indignation with little to no dialogue.

That juxtaposition between calm surface and bubbling volcano, is the very foundation of “Payback”, a more visceral example of the feeling coursing through the veins of everyone from Butcher to… well, everyone except Hughie and Starlight, living out their little suburban dream of Peleton mornings and afternoon red carpet premieres – they’re really the only ones who’ve seemingly settled into the life they wanted, with no regrets from the way the events of season two played out.

It’s a moment of harmony, darkened quickly by the events of the episode; I mean, do we think the FBSA is going to be considered a working experiment if coked-out supes continue to explode people from the inside of their penis shaft? Gratuitous metaphor aside, The Boys smartly presents a series of moments briefly clouded by the scent of passing drama; publicists fucking directors, The Deep still being weird and shady about the cult he was involved in, Gloria blowing up a dude she knows from “Red River” in an extremely graphic way Hughie is witness to (making him three for three in “seasons where he gets absolutely drenched in blood”)… while Vought and everyone is putting on a good face, “Payback” is immediately pulling at the threads of its new reality, as its still establishing it.

The real crux of the premiere, of course, comes in the form of the audience going “hey, there’s Jensen Ackles!” – even though Soldier Boy only appears in photos in the premiere, the sudden interest around Payback (one of the world’s original teams of supes) and his mysterious death look to be the catalyst to kick this season into gear (plus, we already know Herogasm is coming, which… well, I am quite interested to see how that is portrayed). “Payback” makes it known pretty quickly that this peace is not made to last, and that whatever the real truth around Soldier Boy is a key to unlocking the season’s insanity.

Oh yeah, there’s also a new reality show, a subdued Maeve working with Butcher, Ryan having nightmares of Homelander killing him, Stormfront’s inability to form a tight grip with her newly-formed arm… “Payback” has a lot it wants to set up and show off to the audience, taking every scene as an opportunity to throw a new, exaggerated wrinkle into the process. And yet, in 2022, The Boys‘ approach to telling its story feels different than in seasons prior; as it truly begins to blur the line between good and bad with characters like Gloria and Starlight, season three of The Boys seems to be doing a bit more than just giving everyone the gratuitous shots of violent death at the hands of supes it knows we all sit down to see.

The Boys has hinted at being a series about something more than its superficial pleasures, but its satirical nature has always kept characters like Starlight and Butcher at arm’s length. A brief pause in the constant churn of plot, however, gives The Boys a moment to reflect and realign itself with the characters its grown. Kimiko’s brief dream sequence is a great example; it shows a character pining to be something more, something different, something that can grow and show beauty, as well as horror and despair – it’s a whimsical moment treated for a laugh (and I’m never going to say turning your show into a musical is a good idea), but it is one that is revealing about the show’s slight shift in tone, and its willingness to engage with itself on something more than the most superficial, visceral level it can.

Time will tell if I’m giving The Boys too much credit; for the sake of “Payback”, however, it appears The Boys has returned a more focused, slightly less desperate version of itself. Unlike parts of season two, it feels like The Boys is using its violence as a hilarious accent to its story, and not the other way around – it’s a small change, but one whose ripple effects could lend for a more dynamic, resonant season of storytelling to follow. With “Payback” at least, it’s off to a good (and very unfortunately explosive) start.