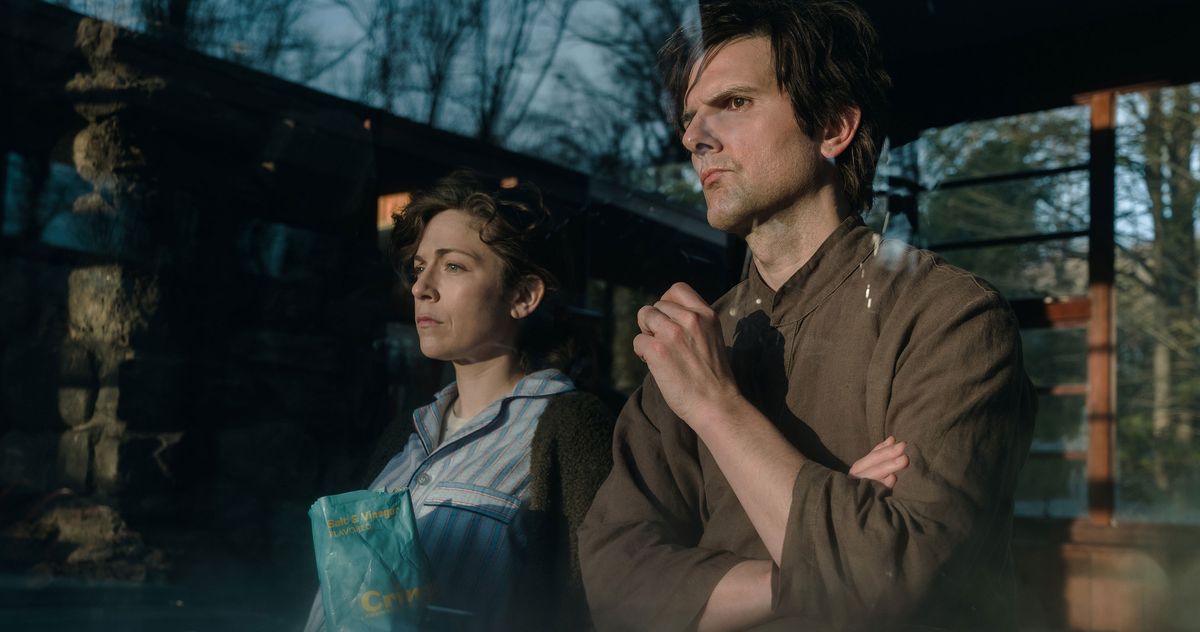 The bleakness of corporate life at Severance’s mysterious Lumon offices is inescapable, but it’s manageable when you’re already only half a person. Mark S (played by Adam Scott of Parks and Recreation fame) willingly opted for the company’s controversial “severance” medical procedure —permanently separating his memories of work and home life; leaving Mark blind to the existence of his family while on the Lumon office premises, and ignorant of his work friends and tasks while in the “outside” world.

Severance offers gorgeous, stylized overhead shots (directed by Ben Stiller) and a palette almost entirely limited to grey, green and blue. It’s an eerie atmosphere, filled with fluorescent lighting and wintery landscapes, but the few welcome moments of humor immediately become inside jokes between its characters and for its viewers.

Late in the first episode, it’s revealed that Mark is grieving the death of his wife, and that the event played a large role in his decision to “sever.” This makes sense considering the bleak behaviour we witness when he’s first introduced, five minutes into the episode —crying in his car in the office parking lot before he goes into work.

At Lumon, Mark abides by the rules, does his best to follow instructions, works quietly and efficiently, and all this carries into his home life. Mark’s daily routine is hollow, and quiet: He goes straight home sit in the dark and drink beer in front of the TV. His world is small: The biggest conflicts until now include his neighbour’s recycling bin taking up his space on the street, and avoiding any divisive topics in conversation, if not avoiding conversation entirely. All these instances —even something as innocuous as the fact that he keeps forgetting to replace the lightbulb in his foyer— are familiar to a person who has experienced depression.

In the show’s bizarre, strangely hypnotizing opening credits, we watch Mark walk zombie-like, between a corridor of office doors. His body is sucked up from where he types at his desk, into a syringe filled with tens of other suited men swirling around, lost. Eventually they melt together into black sludge. The striking display ends with two Marks —the two versions of himself, separated through this medical procedure— on a bed; the home-life Mark falling asleep, a suited one waking up for the workday.

In our current climate —where employees receive work texts late into the night and their job’s responsibilities bleed into their social lives— it’s easy to imagine there would be a weightlessness in having no office drama, no corporate obligations, no deadlines looming overhead when you get home. In the world of Severance, the entire time we’ve seen Mark thus far, it’s difficult to know the difference. His whole world is muted with grief, and dulled by loneliness.

—In fact, he appears marginally more animated and confident when he’s at work. It’s likely that Lumon is the only place Mark feels some sense of control in his life. (He remarks to his sister that the procedure has helped him the way therapy might. To which she responds: “I just feel like forgetting about her eight hours a day isn’t the same thing as healing.”) Mark’s sister, Devon (Jen Tullock), who seems to be the only reason he socializes with “outsiders” at all, sets up him on a date with her doula. On the date, when her doula asks him, of the severing procedure: “You could get married and have kids, and just forget they exist for eight hours every day, for your whole life. That doesn’t mess with your head?” Mark responds, “I think, for some people, it’s the point.”

As the couple leaves the restaurant, they come across End Severance protesters, speaking out against what they believe is a forced labor practice. “What about the self-mutilating types who do it willingly?” Mark enthusiastically asks the protester, “I heard that some of them are so deluded they don’t even know they’re victims.” Mark continues, ramping up the sarcasm as he does, energised for the first time since we’ve seen him outside Lumon: “I also heard that if you’re severed, you go to two separate hells. Is that true?” His anger in defense of severance is, of course, deeply personal. It’s clear to see —and even more clear to those familiar with depression— that keeping this job is only possible because he made the decision to sever.

When you’re depressed, the most basic tasks feel (and can physically be) impossible to do. It’s difficult to manage brushing your teeth, or concentrating on conversation when you’re with friends; Performing at your job after the devastating loss of your spouse is beyond overwhelming. Severance is essentially Mark’s coping mechanism; the only way he’s able to move forward with his life in a way that’s acceptable to society. So, it’s reasonable and understandable that he’d be protective of an employees’ choice to undergo the operation.

That the information revealed to Mark by his former-colleague and “work best friend” Petey (Yul Vazquez) makes him suspicious enough to investigate the truth behind Lumon is significant. It will be interesting to see how Mark’s emotional ties to the operation will influence his actions against the company. Mark being the person who may change everything is in itself an act of engagement with the popular Parks and Rec “Do you think a depressed person could make this?” meme starring Adam Scott.

It would be a huge accomplishment if he pulls it off —breaking free from the routine that’s kept him going, and doing something bold to uncover the truth— because between his wife’s death and the secrecy surrounding his job, facing the truth is something Mark’s been fiercely avoiding.

Watching him unravel these mysteries and wrestle with the implications will be the most fascinating part of the upcoming Severance episodes. Not least because frankly, we don’t know if he can. More than that, we don’t know if he will want to. Severance asks not only could a depressed person do this, but should they? And, more sinister: If Mark uncovers the truth behind Lumon, will he survive it?