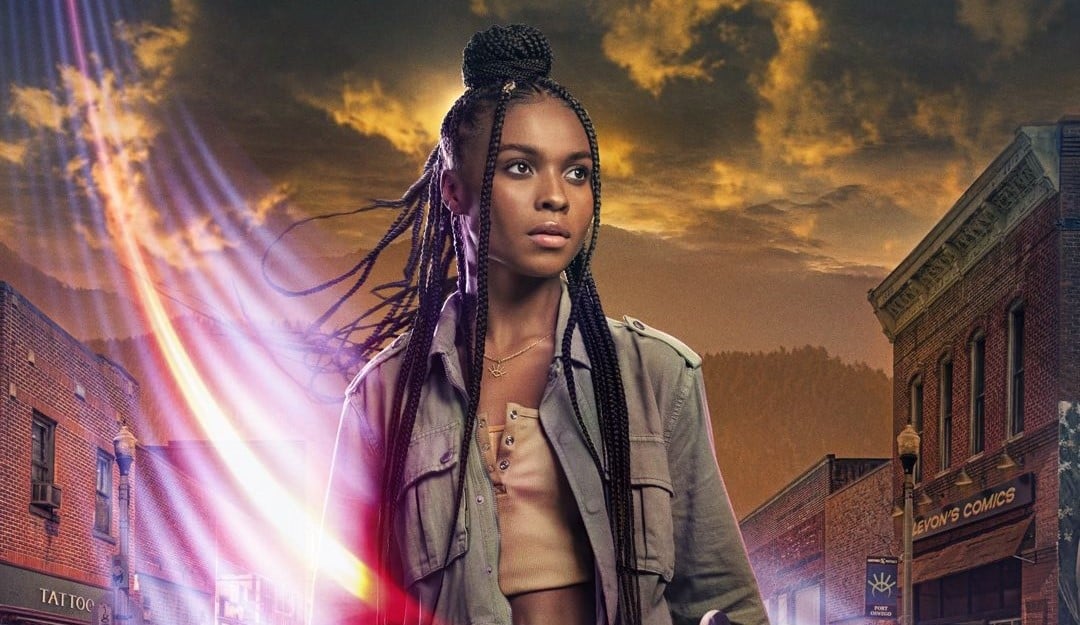 In Naomi, a Black Girl Comes of Age Heroically

Naomi —based on the DC comic of the same name— is a superhero origin story about a bubbly, confident teenage girl who is beloved and involved at her high school. It’s a fresh take on a popular trope and an important representation that shines. When Naomi McDuffie (Kaci Walfall —only the second Black woman to lead a DC superhero show on The CW) skateboards to school in the mornings wearing killer sneakers, Naomi gives its audience unforgettable scenes set to Jaden’s “Icon” and Halsey’s “I am not a woman, I’m a god.”

It’s immediately clear that this is a show representative of and directed towards those historically marginalized by major superhero stories; Naomi is for the people who are usually excluded from representation of this kind but know they’re badass enough to be the stars of their own universe.

Naomi McDuffie runs “the number three Superman fan site in the world.” The Kryptonian is a fictional character in this universe as he is in ours, until she begins to uncover a supernatural world that’s been happening right under her nose. —The local tattoo artist whose shop she skates past every day becomes her mentor; The shady used-car dealer who targets military families like the McDuffies is revealed as an enemy. (Her character’s surname is a tribute to Black comic book writer Dwayne McDuffie, whose prolific career focused on amplifying and diversifying representation in comics.)

Tattoo shop owner, Dee (played by Alexander Wraith) is a zen guardian of knowledge who takes Naomi under his wing, metaphorically and literally, to guide her on the path of discovering her truth. An alien himself, Dee has gorgeous copper metal wings that unfurl at his command. At the end of episode two, Naomi follows his encouragement to jump off a bridge and establish what will happen. —Does she have wings of her own? Dee’s face lights up at the fact that she doesn’t fall, but the episode ends before the audience can see the result.

The show’s been mysterious about defining her powers, and Dee has been clear that Naomi has a long way to go before controlling them; All we know is that she has them because she’s an alien who arrived on our Earth during a mysterious UFO collision event. So far, we’ve seen Naomi create energy surges and whirlwinds around her; She’s used super-sight, super-hearing skills, and telekinesis. She’s also activated alien artifacts simply by being in proximity to them.

This investigation and testing of theories are very much what the show has been about thus far. What’s unique about Naomi is that she’s going about it quite openly: She informed her parents on the same night they confessed that they found her in a forest after an alien landing; Naomi’s best friend, Annabelle (Mary-Charles Jones) —who inexplicably calls Naomi “babe” in every second sentence— knows that she is an alien and thinks it’s awesome. This is not your average timid, shy, outcast superhero story. Naomi McDuffie is a talented, multitasking, happy young woman with work-life balance and romantic relationship experience before she discovered she has superpowers.

The series’ opening scene makes sure we know that Naomi is the life of the party, while also excelling at AP classes her peers are struggling with. She is selected for prestigious debate team events at school (though her speeches are bizarrely non-sensical, the crowd responds as if she’s killing it in the show), and is popular enough to have the student body beg her to run for class president. With her academic power and influence online, Naomi doesn’t need superpowers to change the world. She’s got a diverse group of friends willing to drop everything and help her (usually because whatever she’s doing is more exciting than schoolwork). Naomi’s even on good terms with her gorgeous, charming, totally-still-into-her ex-boyfriend (Daniel Puig, with whom Walfall has off-the-charts chemistry).

While her kinship with Superman stems from the fact that they’re both adopted, when Naomi learns that she may have more in common with him, it weighs her down. She confides in Annabelle that she’s always been different, “usually the only Black girl in class”, and for once she’d just like to be normal. Annabelle reminds her that she’s never been just normal: “You, Naomi McDuffie, are exceptional.”

For now, we don’t know if she can fly, but we do know that Naomi has a whole community in her corner. She’s intelligent, brave, capable of rallying a team in her favor, and of flirting with various people —casually keeping them on the hook with no intention of following through on their feelings for her. She’s also boldly, delightfully queer in the way that makes you feel hope for the teenagers of today.

When her mom (Mouzam Makkar) playfully refers to comic store owner Lourdes (Camila Moreno) as “Purple hair. She has a crush on Naomi,” her dad’s (Barry Watson) only response is to note that Naomi already has other love interests: “You’re dating multiple people now,” he casually remarks, sounding impressed. “They’re all my friends,” she replies with a big smile on her face. “I like them for different reasons.” The show’s directors allow for questioning stares between the high school boys battling for her heart when the two teenage girls share flirtatious banter and mischievous looks. There’s a full-on multi-gender love-square happening over this nerdy alien girl and we simply love to see it!

Even before she knew about her superpowers, Naomi has known her strengths. There’s power in how smart, kind, passionate and determined she is. And it’s a joy to see that even alien villains won’t get in the way of Black girls thriving in the Naomi-verse.

Severance Asks: Could A Depressed Person Do This?

Yellowjackets – What do We Want to Happen in Season 2?