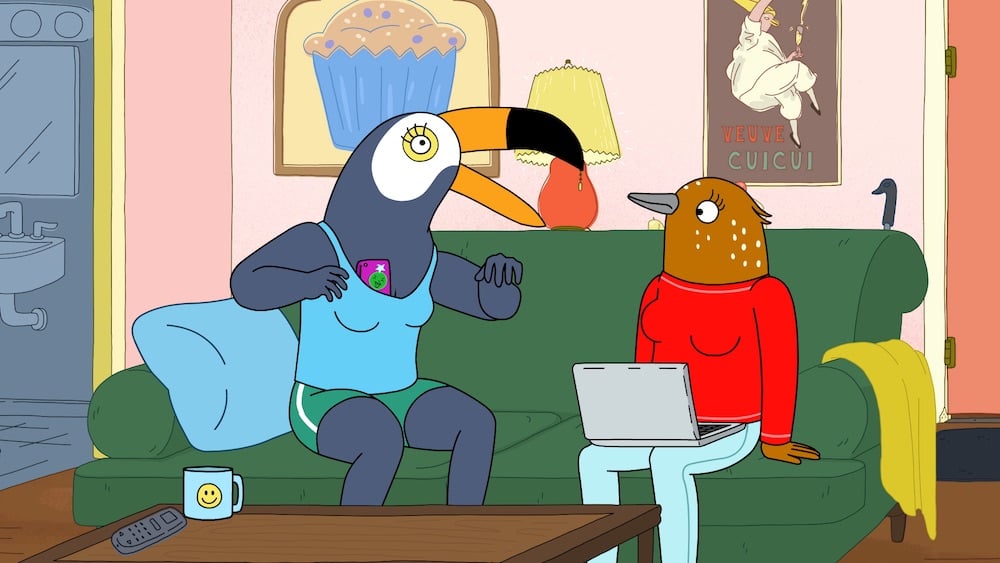 The second season of Tuca & Bertie (cancelled after one season at Netflix in 2019, now presented by Adult Swim) meets us in the middle of Bertie’s conversation with a new therapist. She’s there for “standard stuff,” the therapist tells her: help to deal with panic attacks “brought on by crippling anxiety and lingering trauma.”

These therapy sessions bring up the concept that Tuca (Tiffany Haddish) and Bertie (Ali Wong) may have a toxic, co-dependent relationship. Tuca is having difficulty online dating because she tells Bertie, “I already love you so much, I don’t have space in my heart for anyone else,” and grappling with that reality lingers throughout the episodes of this season.

We are introduced to Tuca’s method of dealing with her emotions: spewing the feelings into a cup, turning the cup over, labelling it “sad feelings summer 2019”, “watched a sad commercial :(” or “Bertie is keeping me alone” then pushing it behind the toilet. She continues her sobriety throughout the adventures that cause the more impactful of these feelings.

With this second season, Tuca & Bertie continues its reign as a strange, joyous animated show about birds living in a playful, surreal version of our modern world: The aloof plant teenagers from season one are back, and tipping waiters with bits of their leaves; We visit Planteau, a pseudo-Vegas where the strippers are muscled tomatoes that the birds can bite into while they dance and the mayor is a sentient potted plant engaging in nepotism; Workmen are seen painting individual leaves of a neighbourhood’s trees in autumn colours; There’s an unforgettable moment where we watch a nurse chew up and aggressively sputter food directly into a new-born baby bird’s mouth.

It’s weird and often goofy, but the heart of the show remains Tuca and Bertie: the hopeful, quirky, inspiring-in-their-own-way best friends who —along with the awkward, adorable third-wheel character Speckle, voiced by Steven Yeun (Minari, Invincible)— just keep going with life, no matter what the world throws at them.

Most powerful is the journey of Bertie finding a therapist, her conversation explaining to Tuca why she needs to do so (“I need a professional, Tuca. You know, if your car’s broken, you go to a mechanic. Well, my brains are broken… I can’t always rely on you.”) and the various counselling techniques she encounters along the way. “Who knew finding a good therapist would be this hard?” she proclaims. It’s a place that many reach when looking for the right kind of mental health support. These are conversations most of us have had, and it’s so refreshing and surprisingly comforting to see them depicted on screen in such a casual and colourful way.

There’s also an educational aspect to the direction the writers have taken this storyline, moments that could inspire people to follow in Bertie’s footsteps. When she wishes aloud that she could have a reality show dating experience when it comes to meeting the right therapist, one of the candidates she’s seeing encourages her to do so: “Oh, you can! You’re free to see as many therapists as you like. Be a cognitive behavioural slut!” “Oh, don’t you want me to choose you?” Bertie replies, to which the wonderful therapist replies with this wise truth: “I could be the best therapist in the world and still not be right for you.”

It’s an important message —one that carries us into a parade of psychologists’ offices where Bertie expresses her worst fears, plucks out her feathers, admits she feels like a burden on Tuca and Speckle, and furiously takes notes about the best course of action to avoid the panic attack she anticipates experiencing when out at dinner that night.

In the episode titled “Kyle,” the titular character is a dude-bro version of Bertie that she manifested during a therapy session. The chaos that ensues is a great depiction of how your therapist’s method, or your outworking of it, can sometimes spiral into unhelpful instances. The circumstances Bertie deals with in this episode are quite dark and eerily timely: she is forced to confront her abuser, as he frivolously prances back into his career by selling apology cookies, fully expecting that is all the repentance and consequence that society requires from him.

And he is proven to be correct. It’s a haunting portrayal of a situation chillingly similar to that of a certain comedian who was just released from prison and is already arranging his next comedy shows. Bertie finds her way through it, though, and manages to understand how to go about her future anyway.

This, too, is an interesting dilemma to put on screen –which parts of our lives are worthy of a conversation with a therapist? How do we know whether something is simply an inconvenience or linked to our mental health? It’s not always clear; there’s often lots of internal debate and ongoing conversations with those around you.

Tuca & Bertie conveys this difficulty with their signature over-the-top zany touch. And when Bertie does talk to her therapist, a silly moment turns into a teachable, supportive one as her therapist calmly explains how this can be a part of processing trauma. It’s not all magically solved, though, which is true to the reality of being in therapy. Bertie is still “discombobulated” when their appointment time ends; She’s literally in pieces, leaving her foot on the floor when she gets up.

This season of Tuca’s self-discovery includes a passionate foray into traffic directing, impromptu sex education, and a series of late-night meetups with her aunt in hospital, which show us a different side to Tuca —one that longs for purpose, but seems to continually be freed from obligations she desperately desires. In the episode titled “Nighttime Friends,” we are taken on a journey of Tuca’s insomnia (and Speckle’s mysteriously athletic sleepwalking, but that’s left unaddressed).

Watching her nighttime escapades is a familiar feeling for anyone who has experienced the unique loneliness, dreamlike freedom, and brief serendipitous acquaintances that come with being awake all night. She’s relentless, though, in her pursuit of joy and connection, and the Tuca & Bertie universe always seems to bow towards her boundless optimism in the end.

Every Chapter of The Legend of Korra Ranked (Top 25)