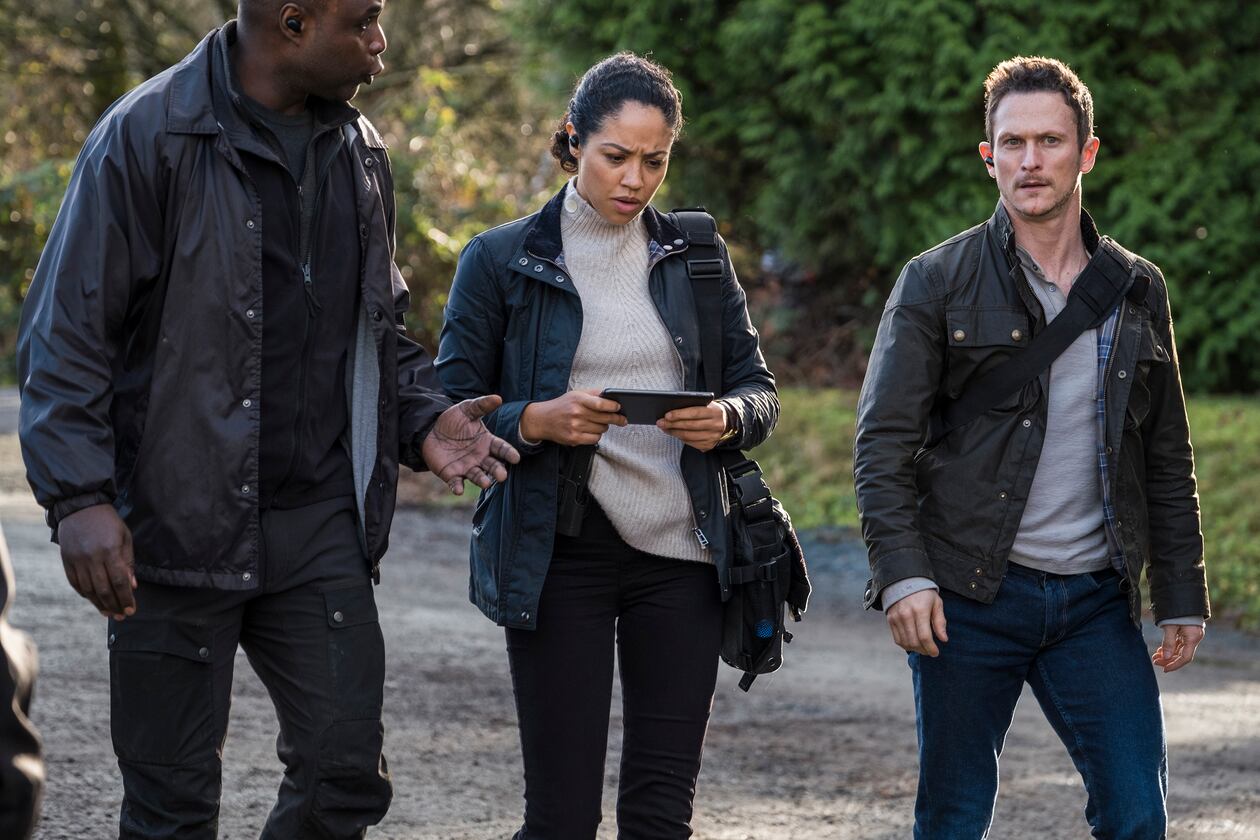 Though unrelated to the pandemic, the crux of NBC’s most recent short-lived science fiction show revolves around the emotional repercussions of our own social distancing: a desperation to connect with the people around us on an authentic level. It is clear right from the beginning of the pilot, which gives us more mystifying mood than premise, that the latest offering from Fringe creator J.H. Wyman does not shy away from sadness, but it also does not allow death and the corrosion of the universe to weigh it down.

Debris is soothing in the way that it only makes sense as far as the characters’ dialogue. When watching this mesmerizing, thirteen-episode-long journey, there is an overall awareness of a mythology that lays beneath the facts being uncovered. It often feels like the audience should pause and refer to the text, as if Debris has a backstory based on graphic novels. In actuality, all the information we’re missing remains in J.H. Wyman’s mind. He planned this show five seasons ahead and made no changes considering that it may not be renewed. We could not piece together clues because there weren’t many provided, which gives the audience permission to not create any mental mind maps. The message is clear: simply let go and enjoy the ride.

We meet the cast of Debris six months into their operation, which creates a base for all the knowledge and instincts they have built over the period before we arrive. It’s eerie, emotional, and endlessly intriguing to watch each episode as new possibilities with the debris reveal themselves to the team and, consequently, to us. The unique beauty of this timeline is that the audience is obliged to look around and notice the world we find ourselves in. We are not specifically catered to or being spoon-fed basic facts; Instead, we are in the room with the operatives as they discuss new information, where there is so much that they don’t need to say to each other.

The true protagonist of the show is the debris – pieces of an alien spacecraft that have fallen to earth and have all sorts of wild and wonderful effects on our world: Floating bodies in open fields, teleportation, time loops into alternate realities, reanimating corpses, personality fragments that clone themselves into separate bodies. We witness the debris personify grief when a boy who died manifests for his mother. At a time when so many of us cannot leave our homes, as we struggle to balance work and prioritizing relationships, an episode of Debris depicted a man wrestling with leaving town for career ambition or staying for love, bringing investigators in when the debris begins forming a barrier around the border of his town as a result.

Our main characters are American CIA operative and ex-soldier Bryan Beneventi (Jonathan Tucker), and British MI6 agent, Finola Jones (Riann Steele). Finola is grieving the loss of her father, and later deals with the suspicions of his miraculous return. Debris depicts a Black woman at the centre of a sci-fi show, where nothing to do with her Blackness is her core characteristic. Her father, a Black scientist, is the in-demand genius of the Debris world who is keeping secrets of his own. It’s therapeutic —healing, even— to see people of colour on screen as more than side characters and, profoundly, not merely assistants to a prominent white man.

In Debris, Finola and Bryan are on equal ground, both somewhat betrayed by their higher-ups, both emotionally invested in the truth of what the debris is. They come from two different sides of the world, but they are committed to working as a team. The tone of this show struck a perfect balance between comfort and drama; We could smile quietly to ourselves as Bryan and Finola fondly bicker about snack choices or spilled coffee, but we are not asked to laugh out loud or experience any bright joy. With the exception of the Afghanistan scenes in Bryan’s backstory flashback episode, which were a jarring (and frankly, unwelcome) look at the reality of war and its impact on individuals on both sides, any emotional turmoil is handled with a peaceful, detached, otherworldly sense about it.

Finola sees the debris as a gift; She believes that it’s come or been sent down for a reason. Brian is much more pragmatic, but throughout the season he begins to look towards humanity and hope more often than strict logic. As they solve mysteries together, Bryan learns to trust in Finola’s faith and follow her reliance on the possibility of good in the world. The way Jonathan Tucker plays Bryan allows the character to break free from television’s typical white male in government work with his guard up. There’s something precious about Bryan’s compassion and the gentleness that he isn’t afraid to show.

It is rare and surprising to have two characters who trust each other and do what you hope they would do in this situation: rely on each other continuously. We experience the brilliant relief of a storyline that eliminates backstabbing or lying between the main characters. At the end of the season, Bryan and Finola have formed a bond strong enough that they rewrite history and leap from alternative realities to get back to each other.

The show offers many fascinating moving parts, but the heart of it is the pair who grow closer and continue to believe in humanity. When the show premiered in March, people across the globe had experienced a full year of lockdown. Far apart from our families and from random moments of human connection, we are each of the people who Bryan and Finola visit in their bubbles: the two-person households, children of divorce caught in a limbo of location, siblings living alone while their parents are overseas, and farmworkers isolated just past the fields they work in. This show reflected the many versions of stuck, lost, lonely, empty, and broken we have felt in the moment. The debris gave voice to the grief of a mother who had lost her son, a man raising his brother’s family after his death, and twins who had been separated into different realities. Bryan and Finola meet these people in their homes and Debris met us in ours.

Debris is available to stream on Hulu and Peacock, where viewers are given the added bonus of voice transmissions during the ending credits which take place on the day the mysterious debris fell but, in keeping with the theme of the show, do not form a cohesive storyline. Unfortunately with the series now cancelled, we will not come to know what’s going on with Bryan’s debris-related injections, the ‘terrorist group’ Influx, or the mysterious ball of light. But that wasn’t the essence of the show.

We had no hope of understanding Debris in one season alone, and even if you weren’t like the many fans of previous NBC sci-fi shows who noticed the signs that the network was not investing the energy that would signal a renewal, you could surrender yourself to it: Debris did not make sense, and that was so soothing. I would argue, though, that if you journeyed with these characters who allowed themselves to become more complex and generous and compassionate people over the course of thirteen episodes – it is not a loss at all.

Revisiting the Groundbreaking Three’s Company Pilot, “A Man About the House”