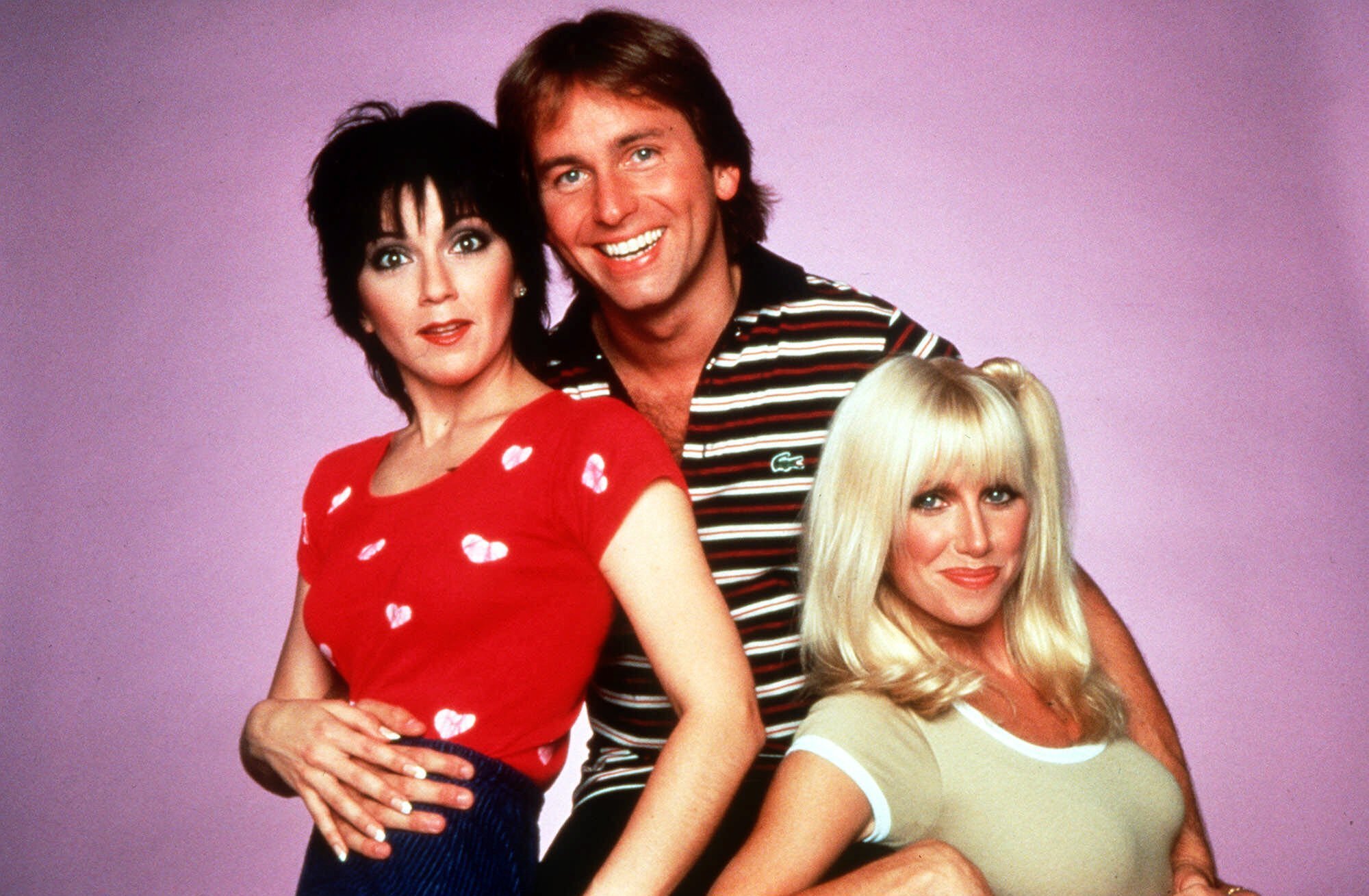 Three’s Company was the ‘Friends’ of its day; a sit-com about three twenty-somethings sharing an apartment in Santa Monica California going through the ups and downs of life for the singles set of the late 70s. The American version of the UK show ‘Man About the House’, TC was considered a groundbreaking show. Hard to believe just over 40 years ago men and women living under one roof as platonic friends was not only a novel idea for television but a shocking and controversial premise. Juvenile jokes, double-entendres, and ridiculous plotlines were all part of the fun, but TC was also a true reflection of the shifting morals and values of young America arriving in the last days of disco and jiggle TV.

Several pilots were made with different actors before John Ritter, Joyce Dewitt and Suzanne Somers were selected to play the roommates we came to know and love. There’s Christmas Snow, the somewhat ditzy blond, Janet Wood, the book-smart brunette, and then there’s the silly but lovable Jack Tripper, a sort of man-child who could be serious and career-minded one minute, and as goofy as Gilligan the next.

But before he becomes a roommate, Jack is a party leftover, discovered by Chrissy when she turns on the shower and sees him sleeping in their bathtub the morning after she and Janet throw a party for Eleanor, their pregnant, newlywed roommate who just moved out. Having no idea exactly whose friend he is and expecting a girl to check out the newly available room later on, Janet and Chrissy try and get rid of Jack as soon as possible. They are about to wake him but the running water does it for them, as Jack turns in his sleep then jumps up realizing he’s in a bathtub that’s half full. After awkward introductions, the girls discover Jack came to their party with a friend of one of the gatecrashers and passed out after drinking Chrissy’s powerful punch. Though soaking wet, Jack tries to leave but Chrissy tells him he can’t go out like that and to take his clothes off. Meanwhile, downstairs we meet the landlords of the building, Stanley and Helen Roper. Mr. Roper is upset, pacing back and forth, complaining how the noise from the party kept him up and caused a crack in their ceiling as Mrs. Roper sits on the couch in a muumuu dress doing her nails. She tells him the crack was actually from a big earthquake, which excited her because it was the first time their bed moved in years. Still, Mr. Roper wants to go upstairs and complain. Mrs. Roper says it should be the head of the house that goes, so SHE’LL do it later. Back upstairs, Chrissy collects Jacks’ wet clothes which Janet will put in the over to dry but not before giving him the only thing they have that will fit; a robe that Eleanor left behind. Both girls giggle when they see him in it. Jack asks for a razor to shave, but all they have is a leg shaver and some product normally use to clean the sink. While he’s cleaning himself up, Chrissy and Janet are in the kitchen making breakfast. Chrissy burnt the toast and is trying to scrape the black parts off but it’s not her fault since Eleanor didn’t leave them the recipe. Janet’s scrambled eggs aren’t any better; they’re ready, she says but for the garbage. Jack shows up and is offered to stay and eat but after one bite he says it’s horrible. Chrissy challenges him to do better so he quickly puts himself to work. He’s studying to be a chef at the L.A. technical college so knows what he’s doing. He asks Chrissy and Janet to get some ingredients he’ll need to make his breakfast creation, eggs Funchal Madeira, but since Eleanor did all the cooking they’re both pretty useless in the kitchen. While Janet is in the living room pouring all the leftover wine from the party into one bottle for Jack to use, Mrs. Roper appears to talk to Janet about the noise. Janet apologizes to her but she’s not as angry as Mr. Roper and tells her to just keep it down next time. As she’s about to leave, in comes Jack, wearing Eleanor’s robe no less, asking about the wine. Janet shoves a bottle into his hands and quickly pushes him back into the kitchen. Mrs. Roper asks what that was, and Janet tries to convince her it was a girlfriend who looks terrible without make-up. Unconvinced, Mrs. Roper tries to protest but Janet rushes her out the door promising to keep the noise down in the future. Back in the kitchen as Jack cooks, the two girls and he discuss their jobs. Jack studies from 8 till 2 and picks up odd jobs on the side. Chrissy works at a pool, (no, she’s not a lifeguard to Jack’s disappointment with a shape like that) a typing pool at an office while Janet works at a flower shop. The doorbell rings and it’s a tall girl who introduces herself as Patricia Crawford with a firm handshake and shrill voice. This confuses Chrissy at first, who feels the need to clarify that she’s Chrissy Snow, not Patricia Crawford but after Patricia explains she’s there to look at the apartment, Chrissy lets her in.

Mrs. Roper tells her husband there’s a man upstairs in women’s clothes. He’s sure she’s mistaken since nowadays ‘they’ all look alike. But Mrs. Roper insists it’s a man, leading Mr. Roper to wonder what kind of game is going on upstairs. ‘Probably something delightfully kinky that only three can play’ Mrs. Roper says, smiling delightfully. For Mr. Roper, just the idea makes him get up and go upstairs, ready to kick the man out.

After a quick tour of the apartment and meeting Jack and Janet, Patricia (Pattykins to her friends) seems interested in the apartment. She has a snooty voice and demeanor, and she’s clearly out of place. Janet tries to let her down easy, telling her a lot of other girls are coming to look at the apartment then whispers ‘there better be’ to Chrissy with a worried look. Mr. Roper barges in in a huff, asking ‘where is he?’ He sees Patricia and tells her to take off her clothes. Surprised, Patricia begs his pardon prompting Mr. Roper to say she doesn’t even sound like a girl and anyone can see that ‘those’ aren’t real, touching her chest. He quickly realizes his mistake and tries to apologize but it’s too late; Patricia calls him a dirty old man hits him with her purse and he scurries out of the apartment, ashamed. Still in shock and saying ‘he touched my bosom’ Patricia exits, stuttering that she could never live there. Neither Janet nor Chrissy seem too disappointed. Patricia came and left and Jack is none the wiser. He’s still in the kitchen preparing breakfast, which is now ready and calls the girls in to come and eat. They gobble the eggs off their plates making yummy sounds as if it’s the best breakfast they’ve had in ages. Just as they’re wishing they could eat that way every day they discovered they can. Jack mentions he’s living at the YMCA because that’s all he can afford while looking for a place to share. Janet and Chrissy give each other a look and realize they have the same bright idea. They leave Jack in the kitchen and head to the living room while eating their eggs to discuss the pluses and minuses if he lives with them. While Chrissy thinks it’s a plus that Jack is cute, Janet doesn’t think she’ll be able to put up much resistance to all of Jack’s sweet talk. Chrissy decides that Janet will have to be strong enough for both of them. They call him into the living room and propose the idea of him moving in and Jack quickly accepts the offer. They lay down the ground rules of the apartment. They’ll share everything Chrissy tells Jack which he’s excited about until Janet clarifies everything means the rent, the food, and the phone bill but nothing else.

Back at the Ropers, they’re arguing over if who they saw was a man or a woman. They return upstairs but this time they both see Jack, still in Eleanor’s robe. Mr. Roper tells the three they’re arguing about a question of sex, so Chrissy thinks they came to borrow a book. Mr. Roper goes over to Jack and says it’s not the person he saw before and does his poking chest test. Jack introduces himself and lets him know he’s moving in. When Mr. Roper objects, Jack says it will be platonic which makes Mr. Roper confused until Mrs. Roper clarifies it means like their relationship. It’s not enough for Mr. Roper who still refuses simply based on the fact that it would be a man living with two women. Seeing no other choice, Jack accepts that he has to leave. He retreats to the kitchen with Chrissy, where he takes his clothes out of the oven and begins to get dressed. But after putting on his hot pants he thinks twice about giving up so easily. He decides to tell Mr. Roper off, which Chrissy says she’d enjoy seeing. Flower robe tucked into his jeans, they burst back into the living room, but before Jack can start on his tirade, Mr. Roper stops him. He’s had a change of heart; Jack can stay. The pilot ends after the Ropers leave, and Jack and Chrissy ask Janet how she was able to change their minds. Cleverly, she solves the problem by convincing the Ropers nothing would happen between Jack, her, and Chrissy. Jack’s a decent, respectable, and hard-working guy – who is also gay.

To write Three’s Company off as a simple, silly comedy with stale sexual innuendos and an outdated premise is to ignore its important place in television history. Men and women living together as a major plot point is laughable today, but in the 70s it was considered as kinky and pushing the moral envelope of decency on television. Like Mrs. Roper, network execs and viewers alike let their imaginations run a little wild with what kind of games might be going on in an apartment with two girls and one guy. The pilot lays the groundwork for so much of what was ahead. The chemistry between Jack, Janet, and Chrissy was evident from the get-go, as were the personalities of each, based on the lines they were given. There would be 3 more years of Mr. Roper’s cracks about his wife’s looks and Mrs. Roper’s complaints about not getting any, wearing an endless selection of muumuus. Eight years of knocking on their door and dancing on their floor as it says in the show’s theme song. Misunderstandings of every conceivable type would arise, along with a gigolo neighbor and best friend, different roommates, girl trouble, a new landlord, a restaurant ownership, and more than a few laughs in between. Three’s Company began at the end of a party, but for viewers, the party was just getting started.

Debris Was A Soothing Balm For Our Collective Grief