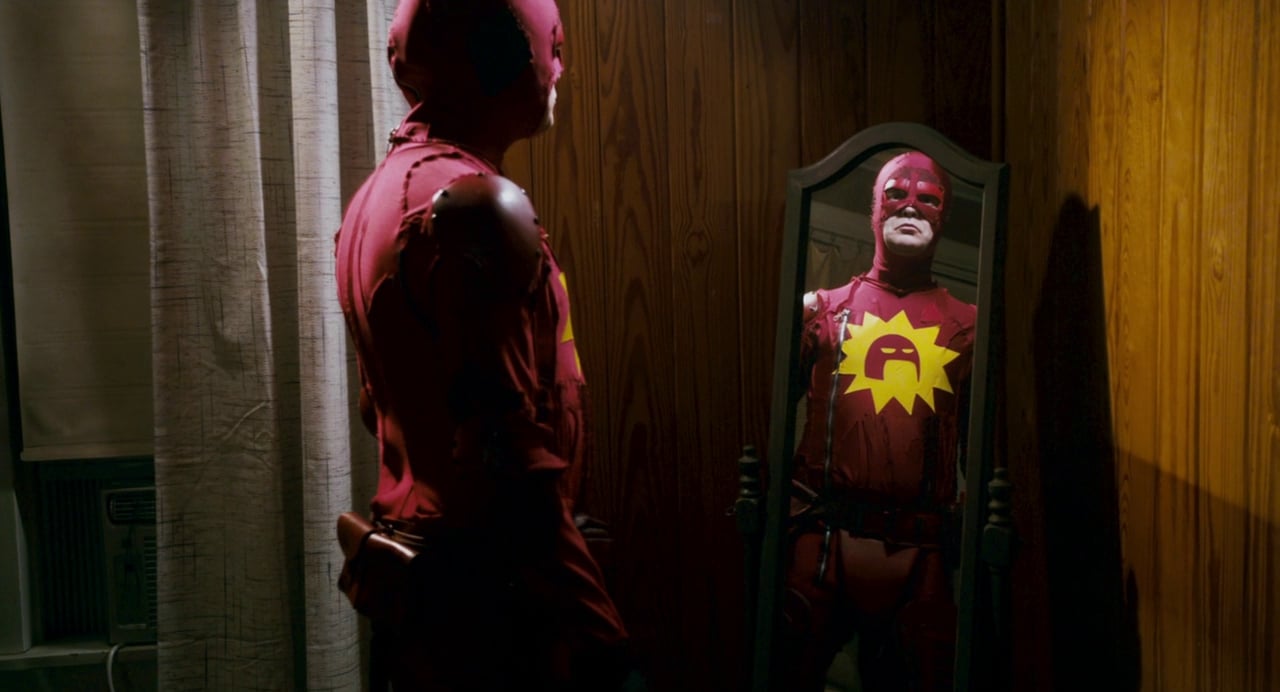 Super embraces pretty much all the bearings of the “everyman turned superhero” concept; its tropes include the obligatory costumed hero (minus an obligatory tragic origin story), the attractive damsel in distress, a heartless villain, a few henchmen, a young sidekick, and an urban environment torn apart by corruption and crime. Unlike other installments of the sub-genre, however, director James Gunn opts for a darker, weirder, and much more cynical approach. It’s a low-budget movie that continually shifts from comic-book spoof to gritty crime story to mental-health drama. Super is far from the first film to strand a wannabe superhero into the real world, but this send-up of “amateur vigilante movies” has more in common with Peter Stebbings’ Defendor than, say, Kick-Ass.

The drama is mostly of the sad-sack variety, brimming with twisted humor. While broad slapstick satires generally don’t cross the line into truly disturbing material, Super dashes far past it and never looks back. The film stars Rainn Wilson as a man who has too long been mistreated by the world around him. He has grown used to insults, personal attacks and mean, hurtful people. After his wife (Liv Tyler) falls under the influence of a drug dealer (Kevin Bacon), the everyday Joe transforms himself into Crimson Bolt, a superhero with the best intentions, but no actual hero skills.

Chock full of extremely graphic, awkward, and messy violence, James Gunn relishes in shocking his audience. At times politically incorrect, Super dives into some dark territory and walks a fine line of potentially offending many viewers. The film constantly shifts between extreme violence, physical comedy, and pathos but Gunn keeps Super at a brisk and entertaining pace. In a film where the tension between silly comedy and poignant drama could have been dicey, the director seems to find a nice balance. The production values are strong especially the opening upbeat animated credit sequence and the insertion of a catholic television series titled “Holy Avenger” that inspires our protagonist to don the superhero costume. However, not everything works. Gunn inserts comic-book-style (Onomatopoeia) text such as BLAM, POW, and SPLAT which feels completely out of place, and at times the musical cues are a bit too cheerful for the dark material he presents.

Super benefits from a fantastic cast, all of whom seem more than willing to dive into Gunn’s madness. Rainn Wilson is excellent in the central role of Frank. His low-key, grounded performance adds an unexpected layer of poignancy when things take a decidedly darker turn. The conviction in his performance is what sells the movie. Unlike Kick-Ass, James Gunn always keeps the film grounded in reality. In fact, Super isn’t so much a movie about a wannabe superhero but rather an unconventional story of how a lonely man in search of personal happiness walks a fine line between superhero and sociopath.

Ellen Page is incredibly funny and downright unhinged as Libby. who later becomes the giddy sidekick Boltie. Page dives into her role with such enthusiasm that her manic love of violence makes Frank seem downright reasonable by comparison. The cast also includes Gregg Henry as a clueless cop, Michael Rooker as an evil henchman, and cameos by Andre Royo (best known as “Bubbles” from The Wire), William Katt a.k.a. The Greatest American Hero, and Troma’s own Lloyd Kaufman.

Not for the faint of heart, the incredible climax (worth the price of admission alone) is a spectacle of bloody violence, and gleeful profanity, sealing Super as a twisted, semi-schizophrenic cult classic. Whether you’re new to the graphic novel game or a seasoned fanboy, you’ll always remember to never butt in line.

Vanishing On 7th Street is Hit and Miss