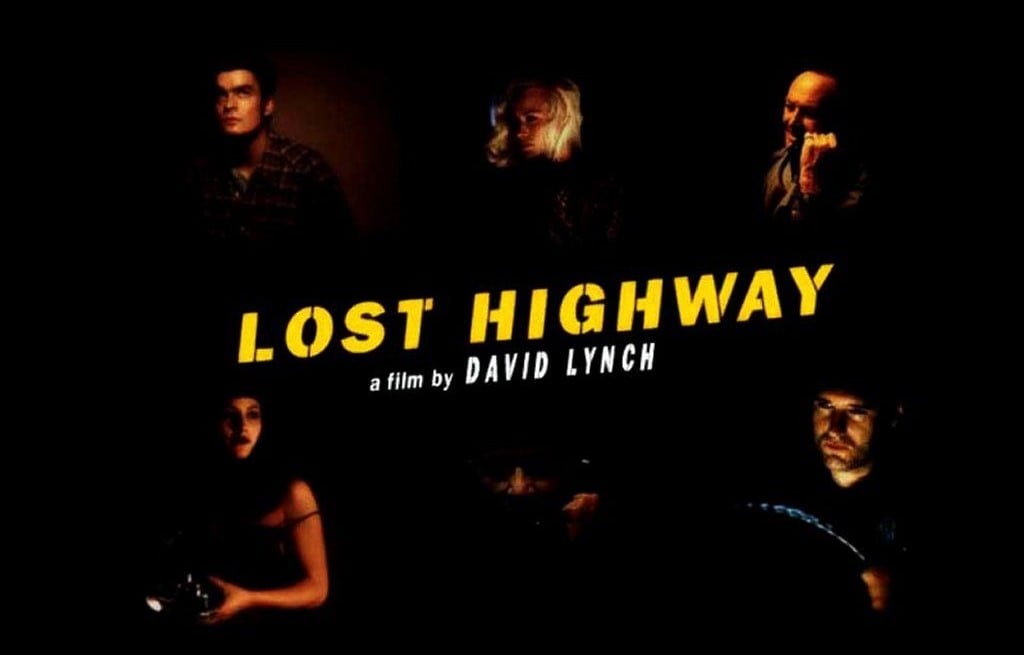 David Lynch’s Lost Highway, which came out in February of 1997- 25 years ago this week- wasn’t that huge a hit, wasn’t especially loved by critics, and hasn’t ever undergone much of a critical reappraisal (Siskel and Ebert gave it Two Thumbs Down- and Lynch put that on the poster.)

It isn’t thought of by most Lynch fans as part of the upper echelon of the filmmaker’s work, falling comfortably behind Twin Peaks, Blue Velvet, Eraserhead, Mulholland Drive, Wild at Heart, and The Straight Story.

But the film does have quite a few things going for it: It looks fantastic, it has a wildly eclectic cast, and most of all, it’s pure, unadulterated Lynch. This is not a movie that anyone can accuse of being sanded down by studio interference.

Lost Highway can best be described as a festival of weirdness, in which no standard rules of storytelling or narrative are applied. In fact, its narrative is almost completely impenetrable, even by Lynch standards.

It has a lot of Lynch hallmarks: A haunting Angelo Badalamenti score, plenty of doubles and doppelgängers, dream sequences that come true in real life, and a bizarre plot that’s true meaning is very much open to interpretation.

There’s also a strangely eclectic cast that includes everyone from Gary Busey to Henry Rollins, in his final film role, Richard Pryor. It’s mostly actors who aren’t part of Lynch’s usual company, although Lynch veteran Jack Nance, who died in 1996, does play a small part in what also his final role.

The first third of the film stars Bill Pullman, less than a year after he starred in Independence Day, as musician Fred Madison. He plays the saxophone — the most Lynch/Badalamenti-oriented of instruments — and lives in a sprawling L.A. home with his wife Patricia Arquette.

In a setup similar to that of Michael Haneke’s Cache — which was actually released almost a decade later — videotapes of their house, and eventually their bed, keep being sent to the couple. Later, at a party, Pullman is confronted by a mystery man, whose credited name, in fact, is Mystery Man.

Played by Robert Blake with a white face and no eyebrows, he confronts Pullman and tells him “I’m at your house right now,” offering Pullman a cell phone to call and find out that it’s true. It would be creepy as hell even if Blake, such a crucial part of this movie about wife-killing, hadn’t been tried (and acquitted) of murdering his own wife a few years later.

After Pullman is arrested for his wife’s murder, he’s thrown on to death row, at which point he mysteriously morphs into a different man, Pete Dayton (Balthazar Getty), a younger auto mechanic who works for a rage-prone crime lord (Robert Loggia) whose mistress is Alice (also played by Arquette.) In its middle third, the film starts to resemble Reservoir Dogs more than Lynch-world, especially in the scene where Loggia’s character beats up a guy for tailgating his car (this was the era when Tarantino influence was everywhere in cinema.)

Later, Pullman returns, and the film resumes its noir identity in its third act, without providing anything close to easy answers as to what’s really going on.

Most of these things are also true of Lynch’s Mulholland Drive, which takes many of those premises and made a much better movie, even though it was originally supposed to be a TV show. In fact, there are various points where it feels a lot like Lynch had another bite at the apple and accomplished many of the things he was trying to do with Lost Highway, more successfully four years later.

So what’s really going on in Lost Highway? One theory, the best I’ve heard, is similar to the most common interpretation of Mulholland Drive: That one half of the film is “true,” while the other half is a character’s dream, which doubles as an idealized vision of what they wish had happened.

Revisiting The Texas Chainsaw Massacre In The Age of Elevated Horror

Texas Chainsaw Massacre Goes for It With a Bloody, Brutal Take on Trauma