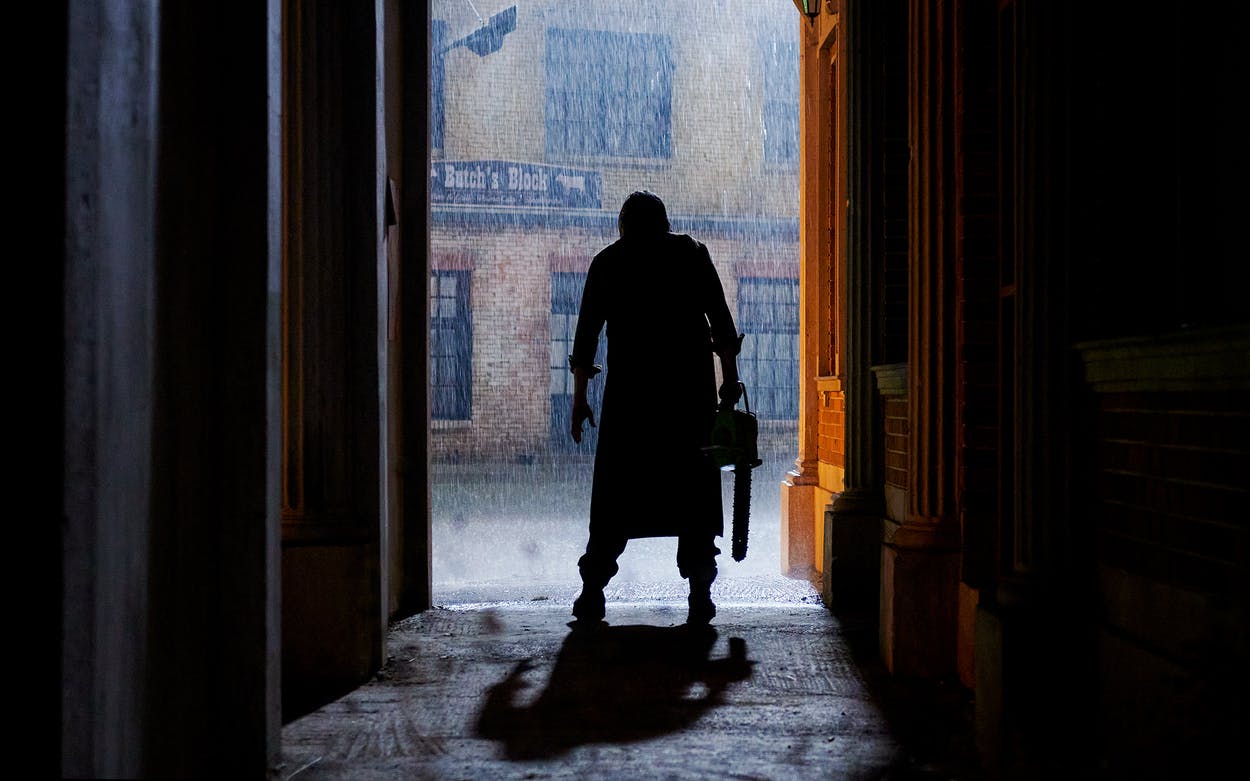 The Texas Chainsaw Massacre is one of the most legendary horror films of all time. Ostensibly the first real slasher film, Tobe Hooper’s bloody road trip through the American south laid the groundwork for one of the most popular subgenres in modern filmmaking history. With these considerable shoes to fill, the 2022 update sets about blazing a new trail while paying off that massive legacy.

How successful it is will largely depend on how you feel about the fresh take in and of itself. What you have to admire about Texas Chainsaw Massacre is how ambitious it is in trying to tell a new story in this world while also making sure to check the boxes in terms of the original film.

The plot follows four college students as they arrive in Harlow, Texas, as part of a project to turn an abandoned town into a sort of youthful, non-violent, utopian society. As survivors or those affected by violent events like school shootings or police shootings, the four set out to face their trauma and use it to better the world.

Unfortunately, they’re also sort of gentrifying the place. As part of this project, they remove an old woman from her house along with her towering foster child. This is, of course, the long-dormant Leatherface, and after his mother succumbs to her illness from the shock of being removed from her home, his violent urges return.

This is actually a brilliant choice for the screenplay, as it pays off the reason for the violent urges of the family in The Texas Chainsaw Massacre. Society evolved to the point where they were removed from their place in it, and they lashed out in gruesome violence as a result. The same goes for Leatherface in Texas Chainsaw Massacre.

Another place where TCM really succeeds is addressing how trauma transforms and haunts those who experience it in their day-to-day lives. This was a notion that Halloween Kills failed spectacularly to address last fall, so it’s nice to see it done properly here. However, its other major divergence from the modern Halloween formula may disappoint fans of that 2018 sequel.

Though Sally Hardesty, the sole survivor of The Texas Chainsaw Massacre, does indeed return here, she isn’t given anywhere close to as meaty a role as Laurie Strode’s hard-boiled survivalist in Halloween. While her presence is felt, she’s mainly a secondary protagonist to the two sisters who double as final girls for the majority of the film.

Luckily the duo, portrayed by Sarah Yarkin and Eighth Grade breakout Elsie Fisher are generally grounded and compelling leads that you find yourself rooting for despite their flaws. Fisher, in particular, shows a non-violent vulnerability and shakable terror that marks her as an especially interesting protagonist for a horror film this gruesome and brutal.

And make no mistake, Texas Chainsaw Massacre is brutal with a capital B. The body count alone is staggering, with a bloody bus full of tourists being sliced and diced apart in awe-inspiring fashion in the back half of the film. Further, every kill offers a nasty, visceral thrill that ups the ante considerably for the TCM franchise as a whole.

Texas Chainsaw Massacre also leans hard into the inspiration for the character of Leatherface. True crime aficionados will know that graverobbing serial killer Ed Gein inspired not just this character but other cinematic boogiemen like Norman Bates and Buffalo Bill as well. TCM pays this off by having Leatherface not only lose it after his mother figure is snuffed out but also take her face for his titular mask.

Lost Highway Was Pure, Uncut David Lynch, for Good and for Ill

Downfall: The Case Against Boeing is a Furious and Tedious Case Study