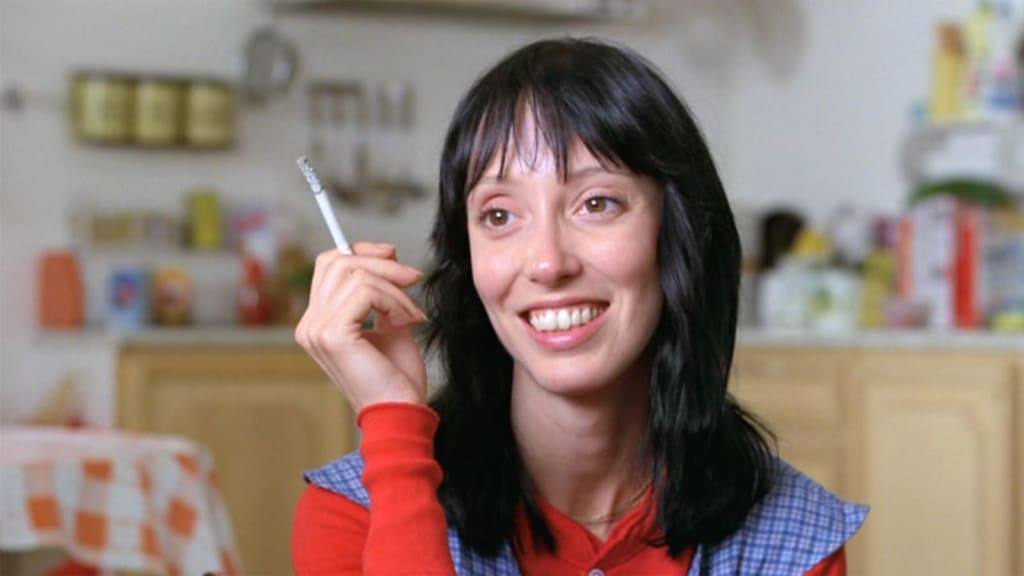 Shelley Duvall’s portrayal of Wendy Torrance has always been a point of contention with audiences. The character made her first appearance in Stephen King’s 1977 book The Shining and was written to be a strong woman trying to defend her son from the threat of her husband—Jack—who’s fallen victim to the slow, all-consuming madness that has overtaken him while they’ve been taking care of the Overlook Hotel for the winter. Although the focus of the novel has always been Jack’s descent into madness and the imposing threat of the Overlook, Wendy has always come across as a mother to be reckoned with.

So when Duvall’s performance of Wendy included significantly more crying and hysterical whimpering and a lot less dialogue than was originally in the book, people were deeply unhappy with what was often considered to be a misogynistic interpretation of her. Directed by Stanley Kubrick with a script by Kubrick and Diane Johnson, the 1980 film version of The Shining was disliked by critics and Stephen King alike. In an interview with the BBC back in 2013, King explained that Kubrick’s reimaging of Wendy made it so that she was,

“just there to scream and be stupid and that’s not the woman that I wrote about.”

Although this article is about Wendy—and don’t worry, we are going to get to her, and why she’s a feminist icon in the film edition of this story—we’d be remiss if we didn’t talk about the double standard in the criticism received by Nicholson and Duvall, or Kubrick’s misogynistic treatment of Duvall.

The Duvall’s Trauma During Filming of ‘The Shining’

Despite its early mixed (or even negative) reviews, The Shining has become a fan-favourite thanks to Jack Nicholson’s unsettling depiction of Jack Torrance. Although some feel his craziness begins slightly too early and comes on too strong, it’s frequently forgiven thanks to Nicholson’s performance and the overall tone of discomfort and danger that’s achieved by Kubrick. Unfortunately, there’s still a widespread dislike of Wendy’s character and Duvall’s performance of her, often criticizing her exaggerated facial expressions and screams. It’s interesting to note that while people grew to love Nicholson’s over the top performance of Jack Torrance, it’s the exact reason people hate Duvall’s portrayal of Wendy.

And while people might think her tears and screams are overly dramatic, some of them were real.

In The Shining, there’s a scene where Wendy swings a baseball bat at Jack, trying desperately to keep him away as she retreats up a grand stairwell. It’s an iconic scene in cinematic history, not just for the incredible acting, but because Duvall and Nicholson were forced to do 127 takes. While Kubrick’s alleged genius is frequently discussed when talking about this movie, people like to gloss over the fact that he tormented Duvall on set. According to Larissa Harris in her piece “Shelley Duvall’s Traumatic Experience Making ‘The Shining’ Scarred her for Life,” the stress on Duvall was astronomical. As she explains, “The young actress went through trauma during the filming of Kubrick’s film, facing tremendously difficult requests by the director, such as the legendary 127-takes of the baseball bat scene, ending up dehydrated with raw, wounded hands and a hoarse throat from crying. The director’s ‘special’ requirements went so far that Duvall started losing her hair.”

To make matters increasingly frustrating, Duvall was originally slated to have significantly more dialogue in earlier versions of the script. However, Kubrick began removing her lines (and much of her character’s agency) from the work as filming went on.

So what we have is Shelley Duvall being tormented by a man in power, whose agency is repeatedly being diminished, and who’s just doing her best to keep it together while being frequently berated.

Duvall and Wendy As Icons

Although Kubrick’s Wendy is substantially different than the one in the book—one of the most notable differences being that the novelization of Wendy is substantially more productive, and a lot less reactive than her cinematic counterpart—she’s no less a feminist icon. Unlike King’s version of Jack, whose descent into madness is slow and progressive, Kubrick’s version shows a man who’s malicious and dangerous right from the start.

And we see moments like this throughout the film. We see Jack’s cruelty and hints of abusive nature in the car ride to the Overlook Hotel when he tells Danny about the Donner Party despite Wendy asking him not to. We see this in the way he repeatedly treats Wendy while he’s writing, making it clear he thinks she’s stupid and useless even before the Overlook sinks its hooks into him. And we see this at the film’s conclusion when Jack not only tries to kill her but enjoys the emotional torment he’s putting her through.

Just consider the scene in which Wendy is speaking to a paediatrician about her son, Danny (Danny Lloyd), towards the beginning of the film. With a cigarette in hand and an awkward half-smile on her face, she hesitates to explain that Jack once dislocated Danny’s shoulder while in a drunken rage. As explained in the thinkpiece “The Discomforting Legacy of Wendy Torrance” by Bilge Ebiri, “the hesitation in her delivery is not that of an actor stumbling. It’s the unease of someone who is petrified that merely mentioning such an event to a stranger might somehow animate the darkness again. It’s a vision of trauma, and Duvall nails it.”

Wendy’s story isn’t one about a #GirlBoss becoming CEO, or an unstoppable wrecking-ball of a woman facing off against supernatural powers. Instead, it’s a story about a victim to standing up to her abuser, and the overwhelming courage it takes her to not only save her own life but her son’s.

While Wendy might come off as a blubbering mess to some audiences, or misogynistic to others, there’s something undeniably feminist about the legacy she—and Shelley Duvall—have left horror audiences.

‘Mallrats’ at 25: ‘Clerks’ with a Bigger Budget- and a Lot Less Success

‘Disturbing Behavior’ is a Pure Relic of the 1990s