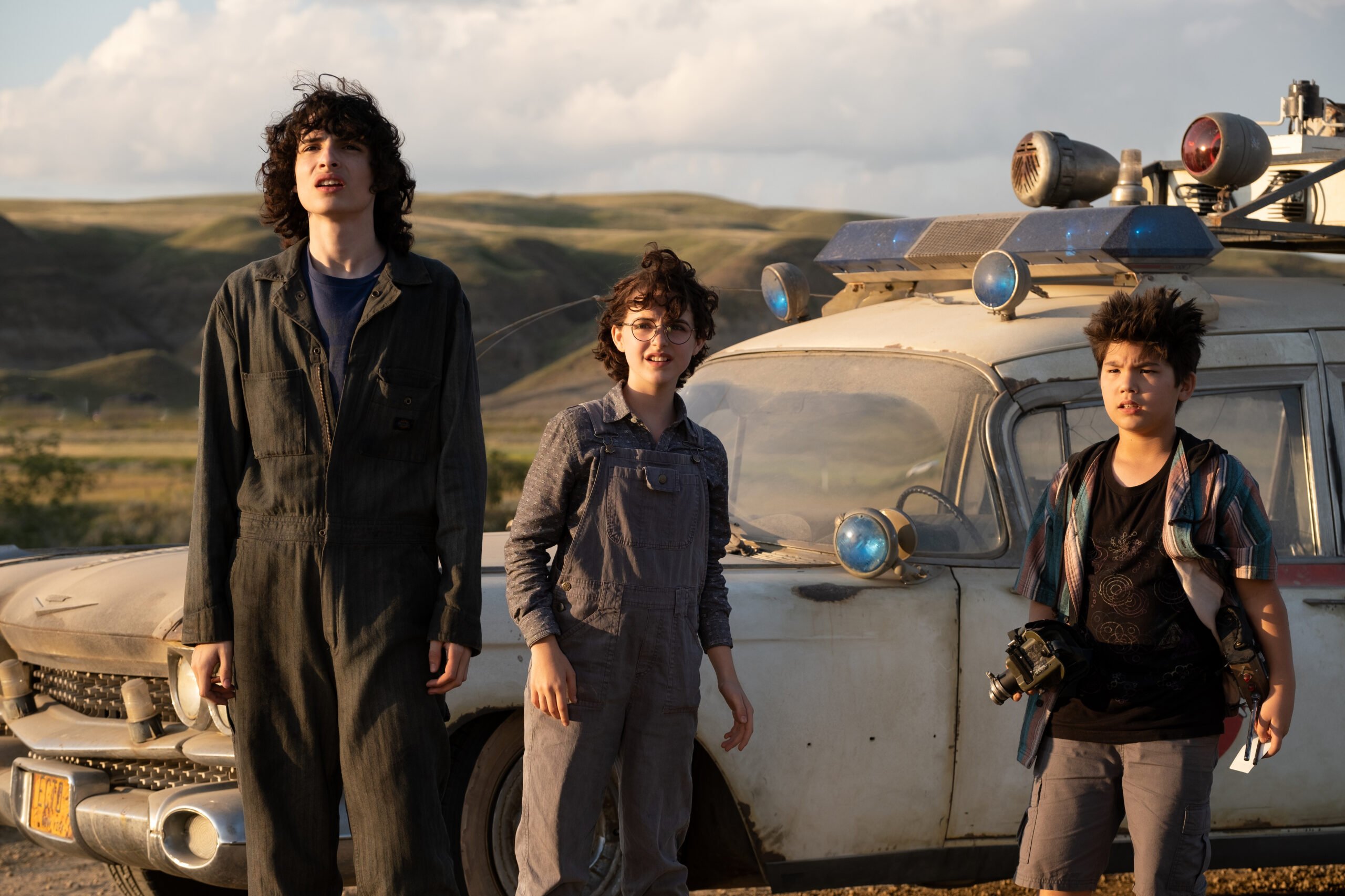 Ghostbusters: Afterlife proves it ain’t afraid of no ghosts, but it is afraid of originality.

This Ghostbusters reboot does succeed in its quest to create a safe sequel that won’t ruffle too many feathers, unlike the 2016 Ghostbusters remake. It expands meaningfully on the lore of the Spengler family and promises a fun blockbuster through a uniquely contemporary lens. The ambitious easter-eggs will make it challenging to come out of this film feeling underwhelmed. Say anything about this addition to the ghost-busting world; it knows how to entertain with a tempting array of cameos and callbacks.

However, it won’t always tread enough new ground to justify its existence. The storytelling will eventually take a backseat to the original films, creating a plot muddled by its desire to appeal only to the fan base. A fan base that likely does not include the generations this project set out to welcome.

Ghostbusters: Afterlife has the next generation of busters facing off against the apocalypse, but the real battle lies within the good and evil of this film’s fanservice.

For the first two acts, Ghostbusters: Afterlife is a spirited walk down memory lane, chasing ghost stories with a whimsical child-like curiosity through a mining town that lends to the chilling gothic notes of this bubbly exploration.

Audiences re-enter this world through the frame-rimmed, wide eyes of Phoebe. Mckenna Grace, tasked with leading the Ghostbusters into a new era, tackles Egon Spengler’s mannerisms with eerie accuracy. It’s through her that the film explores its best work, dredging up thirty years of ghostly secrets that pay homage to the buster we lost too soon. The subtle reveals of Egon’s second life within the walls of his haunting farmhouse are a fascinating draw, coercing small gasps from audiences with its thoughtful approach to the mystifying Summerville.

The first-half displays an understanding of the heart this escapade must have to appease fans of the 1984 classic.

The way the premise incorporates Harold Ramis’ legacy into the lore of present-day ghost-busting amplifies the potential for groundbreaking storytelling here. It’s adventurous with amateur busting montages authentic to the children taking on this legacy. It is humorous in ways that mirror the original’s offbeat dialogue beautifully; the cinematography allows Alberta’s landscape to stand confidently as a replacement to the skyscrapers of Manhatten.

The adventure focuses primarily on external conflict. Unfortunately, that means characters aren’t the primary concern of this premise, disappearing and reappearing as the plot calls for it. So much of this relies on steady action and the charming presence of Phoebe and Podcast’s shenanigans — and often, their curiosity is enough. After all, that is originally what this story sets out to do, introduce a new generation of ghostbusters.

When Ghostbusters: Afterlife hones in on that task, the town of Summerville comes alive despite its residents’ stubborn refusal to leave the shadows.

Phoebe turns that proton pack on for the first time, tapping into the essence of what makes this outing enjoyable. It’s as if we are rediscovering the Ghostbusters with each room of the farmhouse. As if this world was once a precious trinket we packed away, and now its warm memories come flooding back. That feeling rears its head in the more emotionally intelligent moments to ignite a powerful sense of nostalgia — one that will no doubt convince most moviegoers to look beyond this reboot’s imperfections.

Nostalgia will appear in many forms throughout this film. However, some callbacks are more subtle and poignant than others.

None more so then when Paul Rudd’s Gary — a wonderfully comedic and somewhat unnecessary presence — finds himself caught up in an adorable assault of mini Stay Puft Marshmallow men. It is a fun reference to the source material that does not hinder the film’s trajectory. The fluffy, barbaric carnage that follows is beyond hilarious as the scene subjects us to a chaotic montage of marshmallow ghosts having a burning, blending, Roomba-ing good time.

There are noteworthy Ghostbuster cameos scattered throughout. First, Phoebe brilliantly uses her one phone call to reach the iconic red landline, and just as all hope is lost, Dan Aykroyd picks up. Then comes the inevitable reunion during the film’s final stand — one that does not disappoint.

No serotonin boost is more significant than witnessing Bill Murray, Dan Aykroyd, and Ernie Hudson suit up in their unmistakable jumpsuits and proton pack to stop the apocalypse with silly laser streams. It’s no mere cameo either, with the actors having a significant impact on the film’s final act as they reunite with a ghostly apparition of Spengler. Fans will take no issue with the cameos and easter eggs that litter this plot, as they ensure the original Ghostbusters are no mere folktale, whispered about in code and hinted at ever so briefly.

No, the original ensemble defies even death to become a tangible presence in this outing, their legacies a constant presence. That makes for the ultimate fan experience. However, when it comes to creating a stand-alone story worthy of the mantle, Ghostbusters: Afterlife struggles to prove itself beyond flashy fanservice.

Fanservice has become something to embrace in a film industry hellbent on reviving everything with a pulse. It can often be comforting amongst box office cash-ins, but it’s beginning to seem as if 2021 is the year fanservice killed the nostalgia.

Free Guy made this observation when it used that fancy Disney money to cram as many licensed easter-eggs into its film as humanly possible. We praise Spider-Man: No Way Home for uniting the spidey-verse. Unfortunately, in doing so, the film franchise is moving father away from Peter Parker’s journey. So here stands Ghostbusters: Afterlife, an installment set in the same universe as the original paranormal comedy, ready to devote its entire premise to reuniting the original busters on-screen at the cost of telling its story.

In its more sincere moments, these callbacks are a sweet gesture made all the more profound by the ghostly apparition of Spengler that appears in the final beats of this installment.

Sadly, this contemporary comedy’s subtle homage is abandoned entirely in the third act, and it is not difficult to pinpoint the exact moment this spin-off loses itself. This youthfully spirited exploration transitions violently into cringy possessions and godly desert fornication. Sure, nostalgic-hungry moviegoers will erupt into cheers at the realization this film is resurrecting the events of the rooftop battle. However, those growing invested in a new story are left to dry as this story panders to ghost stories.

If you turned People’s Sexiest Man Alive into a dog in the name of telling a better story, you misunderstood the assignment.

Rehashing the NYC rooftop showdown with Gozer is an ambitious callback, but it has no real place in the premise. It’s a clear indication this film is more concerned with dredging up plotlines from the original than nurturing new material. Ghostbusters: Afterlife does not attempt to spin this cut-and-paste showdown as something new. The story gives itself over entirely to the four original Ghostbusters before banishing Phoebe’s motley crew to the sidelines, where they remain.

This film never rises to the occasion. When the crucial moment comes to step from the shadows, this movie uses the 1959 Cadillac as a metaphor to run itself over. It begs the question, is nostalgia worth squandering an excellent film? For most fans, the answer is likely yes.

This slimy, stifled reboot is a harmless jaunt through paranormal science-fiction that will delight die-hard fans and satisfy passive viewers as a surface blockbuster. But make no mistake, the same callbacks this film coasts on are what will bring about this franchise’s renewed demise.

This project weaponizes nostalgia with clever but ultimately fleeting tactics. However, no project’s fanservice should come at the cost of telling its story, regardless of how good the cameos are. To champion this revived corpse for rehashing the same beloved storylines is to ask for this industry to beat everything you love about the Ghostbusters franchise into the ground.

Witnessing the Ghostbusters reunited will be one of the greatest moments we will experience in cinemas this year. Still, it is foolish to think this reunion will be allowed to rest peacefully with more sequels on the horizon.

As a separate entity, this project failed to create something meaningful for the next generation. It’s a meh movie in many respects, and as someone that enjoyed the 2016 Ghostbusters, this lacklustre addition does not encourage a change of allegiance. With the 2016 remake’s commitment to over-the-top physicality and a dedicated female gaze, this movie’s failures as a stand-alone are prominent. Dislike the all-female remake as you will; at least it didn’t let a perfectly good Avenger go to waste.

Ghostbusters: Afterlife’s mediocre cowardice to break new ground suggests it is not the ghosts we have to be afraid of; it is the films hellbent on chasing ghost stories.

Star-studded House of Gucci is a Scream