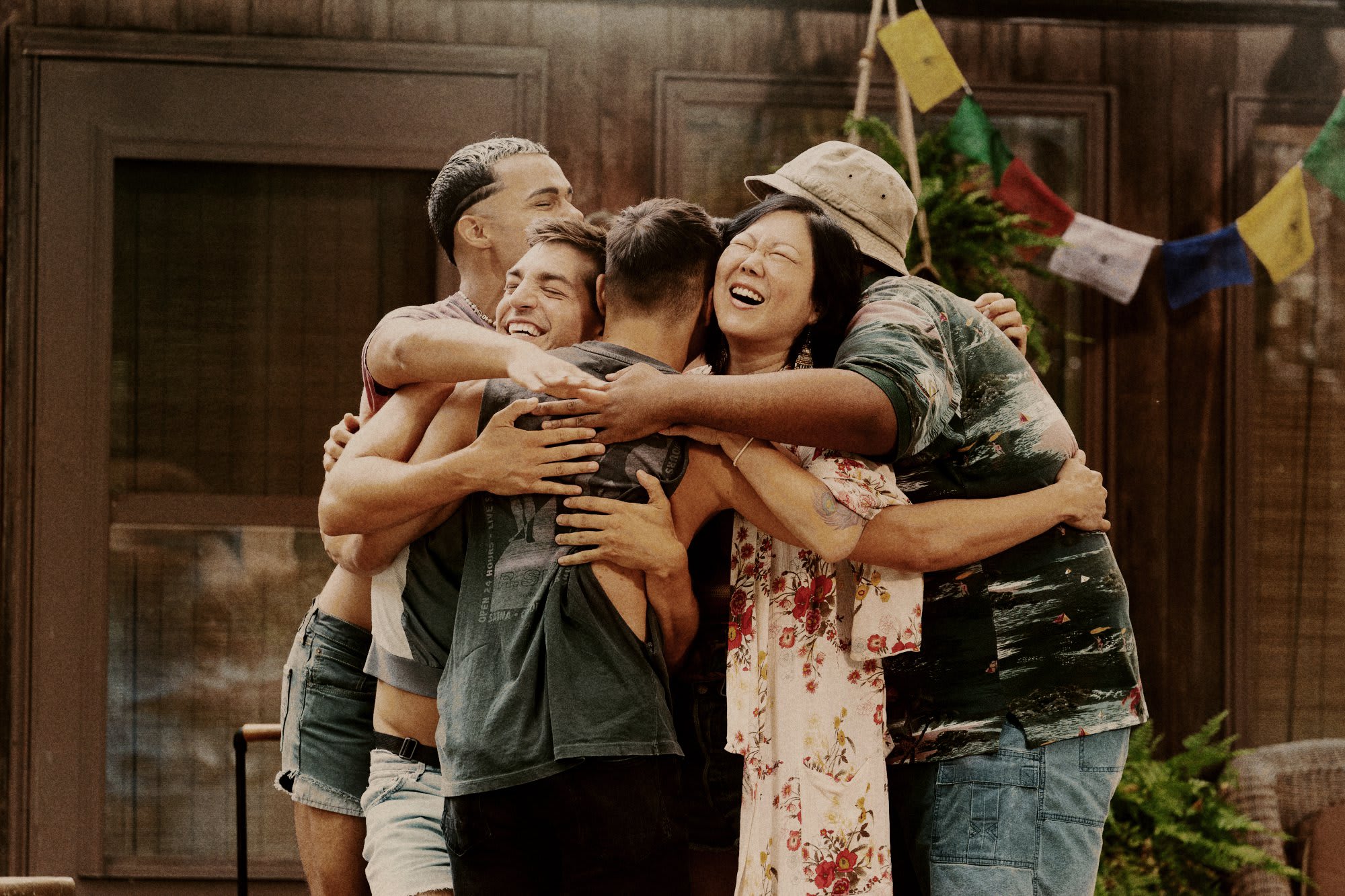 The film follows the story of a chosen family of gay men (and one lesbian) who spends one week every year vacationing on Fire Island. The men are mostly working-class, and they are all far from financially affluent. The only reason they can afford to vacation on the very expensive Fire Island is because their lesbian mother figure Erin (Margaret Cho) once won a lawsuit after a mishap at a restaurant, allowing her to buy a house there. However, Erin ends up losing all of her money because of a bad investment in Quibi (a nod to the film’s history as a canceled Quibi series), and the family discovers that this will be their last year on Fire Island.

Quirky romantic Howey (played brilliantly by rising star Bowen Yang) meets handsome doctor Charlie (James Scully), and Howey’s chosen family ends up entangled with a group of extremely wealthy, mostly-white, muscular, conventionally attractive men. A lot of the film’s scenes are focused on the contrast between Howie’s family – who are less wealthy and more racially diverse, and who represent a broad range of different body types – and the much more homogeneous, muscular rich gays.

What makes Fire Island so different from the bulk of queer stories in recent mainstream cinema is that it was clearly written with a queer audience in mind, and it doesn’t make any concessions for heteronormative viewers. While sweeter stories like Heartstopper or Love, Simon can be truly fantastic, they also tend to create queer images in a way that is very palatable and easily assimilable to heteronormative values and audiences. Fire Island is not interested in holding straight people’s hands; it is unapologetically queer, and it doesn’t waste time trying to explain or soften itself for viewers.

Part of the joy of Fire Island comes from its willingness to embrace the glory of queer messiness. Characters drink a lot, have a lot of casual sex, and are consistently sloppy, rowdy and delightfully debaucherous. These are not sanitized queers or cute teens designed to make suburban moms comfortable: they’re honest, raw, adult characters with messy and realistic lives. And yet, unlike the tragic characters in something like Brokeback Mountain, the film is still primarily fun and happy: the realism creates a foundation for joy and celebration rather than tragedy. For anyone who has been waiting a long time for a new film that indulges in the pleasures of queer mess, Fire Island fills that void delightfully.

Also extremely refreshing is the way that Fire Island resists the recent obsession that queer-centered stories have about reconciling queer folks with their estranged biological families. When the Broadway musical The Prom was adapted to film, it introduced an awkward plot where the character Barry reconciles with the mother that had disowned him decades earlier. Constantly forcing characters to reconcile with biological families is harmful because it undermines the legitimacy of chosen families and leaves little room for queer folks who don’t desire a family reconciliation. Fire Island casually mentions that their chosen family is all that they have, and the film never attempts to force any of them into a reconciliation narrative with biological parents.

Despite its fun and primarily celebratory tone, Fire Island also delves into serious issues and handles them very well. Central to the plot is the class divide between Howey’s family and the wealthy group of friends that Charlie brings him into contact with. Howey and his friends face discrimination based on race, femininity, body type, and class, providing a poignant insight into the problems of intersectional discrimination within gay spaces. If queer cinema is only interested in providing palatable images for a mainstream audience, it looses the ability to tackle complicated problems that develop within queer communities: Fire Island does an expert job approaching these topics.

Howie and his best friend Noah (Joel Kim Booster) navigate both the problem of men who refuse to date Asians and the issue of racial fetishization at the hands of white “rice queens,” demonstrating the racism that Asian and Asian American gay men regularly face. The phrase “no femmes, no fats, no Asians,” referring to common discriminatory profiles on dating apps, is explicitly brought up as an issue that the protagonists face. The film remains unwavering in its critique of discrimination within queer spaces, while at the same time maintaining its underlying celebration of the joyful aspects of these spaces.

In addition to the film’s meaningful social and political importance for queer communities, it is also important to note that it is also incredibly funny and heartwarming. The cast is hilarious – which should not be surprising with comedy talents like Cho and Yang involved – and the writing perfectly complements their performance style. Throwaway lines like “can I trade someone a crest white strip for a PReP pill?” offer big laughs, and more subtle moments of physical and situation-based comedy allow the cast of delightful characters to shine. There is never a dull moment or a dull character: the script constantly impresses and the cast constantly keeps up with it.

The romance plots are strong and well-developed, although the film is clearly more interested in the relationships between the members of Noah and Howie’s family than it is in romance. The film explores a romantic relationship between Noah and Will (Conrad Ricamora), two characters who explicitly say they have no interest in monogamy, providing a rare example in mainstream entertainment of a meaningful romantic relationship between polyamorous characters. The emotional moments are powerful enough to bring viewers to tears, but they never distract from the larger comic and fun tone of the film.

Fire Island feels similar to a lot of queer-centered cinema that flourished before the mainstream success of films like Brokeback Mountain in 2005. Its inside jokes, deep investment in queer culture, unabashed messiness, fun spirit, and complete disinterest in even remotely appealing to a heteronormative audience bring back memories of queer classics like The Broken Hearts Club or The Watermelon Woman. While this style of film never truly ended (Patrik-Ian Polk’s fantastic The Skinny just came out in 2012), it has increasingly faded into the background as queer cinema has attempted to appeal more to a generalist, mainstream audience. Fire Island shows that there is still much need for queer cinema designed primarily with a queer audience in mind, and it fills that need brilliantly. The film may be very good news for queer cinema indeed.

The Untouchables Was a Tall Tale, but an Enjoyable One