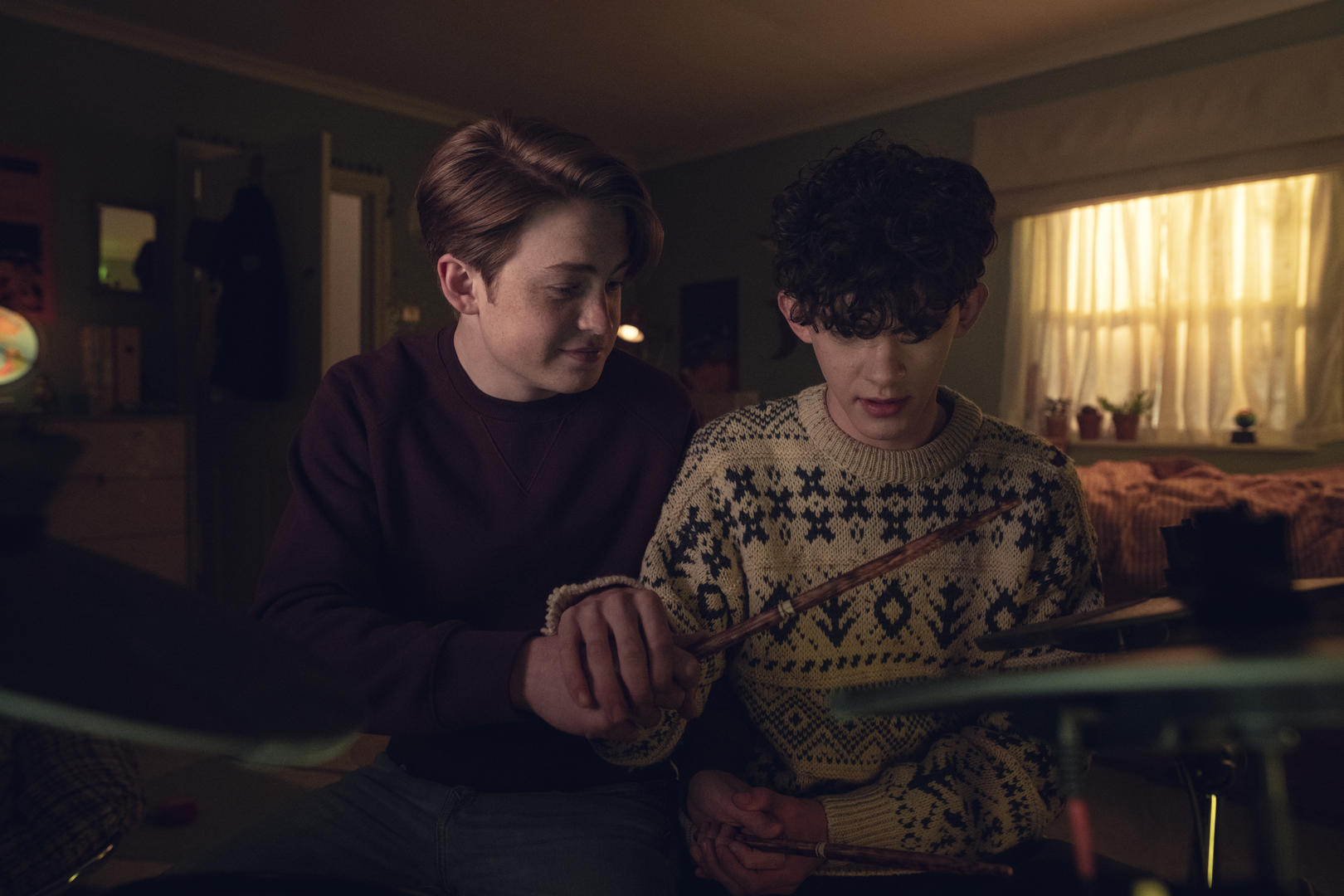 The trailer for Heartstopper promises a nice, if somewhat formulaic, teen romance filled with heartwarming moments and light comedy. The series could have been exactly what was advertised, and the result would have been a sufficient and satisfying addition to the queer teen canon. What the trailer doesn’t reveal is how the show goes above and beyond expectations to produce a beautiful, formally innovative, historically informed, and extremely polished work of art.

An extraordinary feat of writing and directing, Heartstopper stands out as one of the most impressive works of teen romance in recent memory. It is also a remarkable example of a comic book adaptation done right.

The series, an 8-episode adaptation of Alice Oseman`s wildly popular webcomic of the same name, is a classic jock/nerd love story in the vein of High School Musical. Soft-spoken and kindhearted Charlie Spring (Joe Locke) meets goofy jock Nick Nelson (Kit Connor) in class and the two fall in love. Because Nick is not out of the closet and still coming to terms with his bisexuality, the two keep their relationship hidden, and the series follows the development of their love story.

Also central to the narrative are Charlie’s three best friends, Elle (Yasmin Finney) Tao (William Gao), and Isaac (Tobie Donovan), although Isaac is definitely less developed than the others. Tao spends the series scared of abandonment, fearing that his friends are going to drift away as they find romantic relationships and other interests. Elle is beginning her first year at an all-girls school after coming out as trans, and she tries to balance her nerves about making friends at a new school with her joy about finally leaving a place where she had faced bullying and harassment. Both Tao and Elle develop compelling stories of their own, exploring what it means to navigate the fear of loneliness and abandonment that can come with major life changes.

Part of what makes Heartstopper so special is its incredibly distinctive and well-executed visual and narrative style. Oseman’s often-minimalist writing style is proof that short, punchy lines can communicate as much feeling as lengthy monologues. Many of the most emotionally-gripping scenes are only a few lines long, and most of these lines are single sentences of under seven words. With expert pacing and a strong grasp of minimalism, the script is able to communicate more meaning with a few words than many monologue-heavy scripts could ever hope to.

One of the most compelling moments in the series is an episode that begins with a full 3.5-minute long scene with no spoken dialogue. The majority of the scene consists of the two protagonists messaging each other on Instagram and scrolling through each others’ feeds. The fact that short, typed messages like “you sure?” and “thank you x” convey such intense feelings is a testament to the quality of the script’s pacing, the director’s vision, and the actors’ performances. Locke as Charlie can send audiences through an emotional rollercoaster with three words.

Having Oseman write the script for the series was a wise choice: her distinctively minimalist, emotionally-loaded style is a major feature of the webcomic, and it is hard to imagine anyone else translating it effectively to the screen. The series doesn’t try to hide its source material and imitate the style of other teen TV shows, but it also doesn’t overplay the “based on a comic book” gimmick. Instead, the show smoothly incorporates panels and some of Oseman’s signature comic book images in a way that always feels natural and appropriate.

The series’ visual style is jaw-dropping, particularly in its use of color. Design-wise, Heartstopper combines homage to queer classic But I’m a Cheerleader (1999) with sensibilities drawn from Oseman’s art style. But I’m a Cheerleader, which is explicitly referenced in the series itself along with other classic queer films, is known for the distinctive pink and blue color scheme it uses to subtly critique the normative gender roles that are enforced onto characters. Heartstopper imitates this same duotone color scheme – adding in the occasional accent of yellow – and the color tells a similar story about how characters navigate complex and shifting relationships with the ways that gender and sexuality are encoded into the structures around them.

The attention to detail is remarkable: everything down to the schoolbooks that characters carry through the halls is carefully crafted to fit the show’s fine-tuned color pallet and art style. It is almost as if a professional inker had drawn every scene, carefully choosing which color would work best for each individual prop and set piece, and it is obvious that everything in every frame was carefully chosen and planned to fit into an aesthetic vision. The level of detail in the prop design and set design is phenomenal.

One of Oseman’s distinctive visual techniques in the comic is the use of small accents like tiny leaves to communicate the emotional tone of a scene. One of the most beautiful things about reading Heartstopper is the way that a single, small, sketch-like accent can absolutely captivate the reader and communicate so much about how a scene is supposed to feel. This technique is carried over well into the adaptation, with small, sketchbook-style accents of leaves and fireworks bringing a sense of wonder and emotional tension into the world.

What is most impressive is the way that a series with a distinctively light, minimalist, pastel-infused style is able to pack so much emotional weight. The intense experiences of teenage life are all alive in the show: it is filled with as much dramatic tension, yearning, fear, anger, and sadness as more explicitly melodramatic teen shows like 13 Reasons Why or Riverdale. However, Heartstopper communicates these experiences just as vibrantly with softness as other shows do with loudness, and its muted pastel experience packs a surprising punch.

The acting is, unsurprisingly, phenomenal: it would be hard to produce a show where simple lines like “hi” can fill you with emotion without strong performances. Rising social media star Yasmin Finney has proven that her talent carries across from Tik Tok to television, and she is stunning in her portrayal of Elle. Locke and Connor are captivating and do an amazing job bringing Oseman’s beloved characters to life.

Also impressive are the ways that the show realistically portrays technology in a way that others often struggle to. A character will spend agonizing lengths of time drafting, deleting, then re-writing a text message before sending it, while the other person longingly waits and refreshes their screen just in case they missed something. The camera lingers on people’s phones not only when they send and receive finished messages, but also when they mindlessly refresh a page or draft and delete an endlessly changing response. These small details make the technology in Heartstopper realistic in a way that it often isn’t: seeing the many drafts of a text message that someone plans and deletes before they eventually send something completely different is a great window into a character’s emotional process.

One issue with the show that might stump some viewers is its somewhat flat take on villains. While binaries of gender and sexuality are broken down in Heartstopper, moral binaries of good and evil seem pretty firmly in place. In the world of Heartstopper, most major characters fall into the roles of “good person” or “evil bully.” Everyone is either a card-carrying PFLAG ally or an unambiguously homophobic jerk, and there is little room for nuance or complexity in the show’s morality system.

The show very briefly tries to address microaggressions through the way that characters treat lesbian characters Tara (Corinna Brown) and Darcy (Kizzy Edgell). Comments like “you don’t look like a lesbian” or “I never would have known” show how homophobia often emerges subtly through statements that might not seem as obviously homophobic. However, these moments are brief, and much less frequent than obviously bigoted statements by students who are painted with all of the subtlety of a Stephen King bully. Characters like Harry (Cormac Hyde-Corrin) and Ben (Sebastian Croft) could have been written with some level of depth, but after 8 episodes they still come across as just simply 2-dimensional mean people.

The closest that the show comes to a morally complicated character is Imogen (portrayed beautifully by Rhea Norwood), who finds herself stumbling into microaggression territory in one of her interactions with Tara and Darcy before trying to correct herself and apologize. Imogen is the only character who sincerely means well, but still has a lot of growing to do, and she probably has one of the most interesting character journeys as a result. Everyone else is either immediately cast as a (more or less) good person or an irredeemable bully.

To give Heartstopper credit, it’s not so bad to imagine a universe where the only bad people who exist are obvious and transparent about it. And Heartstopper never claims to be a deep dive into the nature of good and evil: for what it does do well, a few thinly-drawn bully characters are an acceptable flaw.

For anyone who enjoys romantic comedies, teen dramedies, queer stories, or just downright heartwarming cuteness, Heartstopper is a show to be excited about. The series is technically impressive, brilliantly written, and emotionally compelling: Heartstopper is truly something special, and not to be missed.

Breaking Bad vs Better Call Saul: Which is Better?