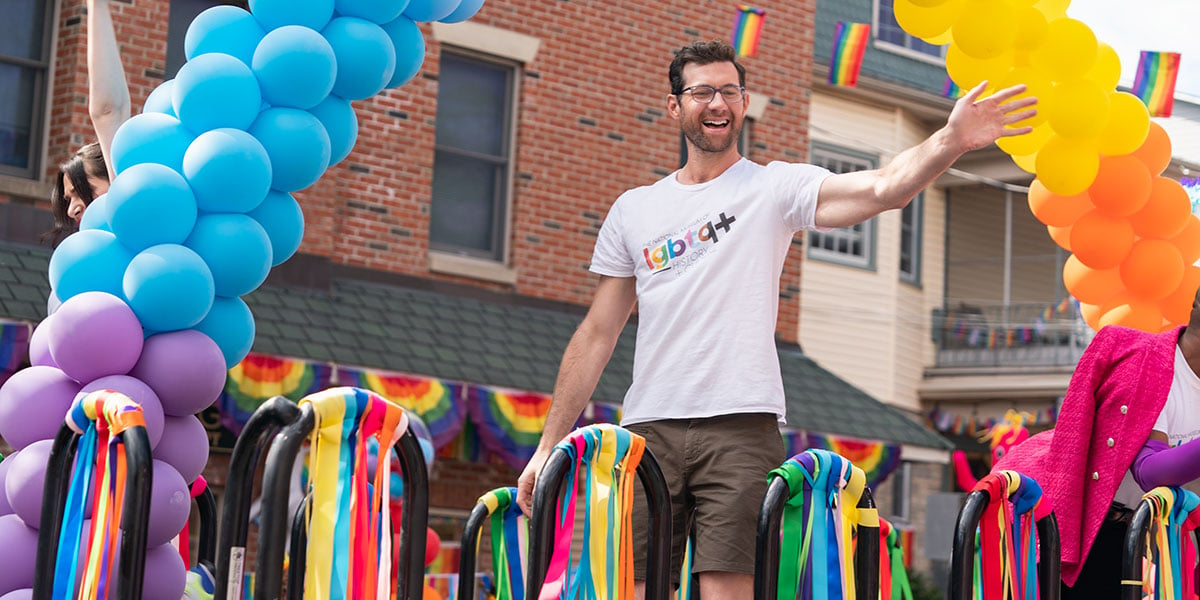 Bros, which had its world premiere at TIFF on September 9, has been much-noted as the first-ever gay romantic comedy released by a major studio — one with explicit sex scenes and an entirely LGBTQ cast — at a time when there aren’t many romcoms of any kind being released by major studios.

But it’s much more than that- it’s something of an auteur project for actor/comedian Billy Eichner, who appears to have made the film as a thesis statement on Eichner’s part about not only romance but American gay life in 2022 in general.

On top of all of that, the film is screamingly funny, and probably the wittiest studio comedy of the year.

Judd Apatow is an executive producer, and while he didn’t write or direct Bros — Nicholas Stoller directed and co-wrote the script with Eichner — this is another Apatow-aligned project in which the movie is built around a specific performer. In this case that Eichner, who is best known for his anarchic TV series Billy on the Street, as well as acting roles from Parks and Recreation to Friends from College. Eichner can be something of an acquired taste, but I’ve always been a fan, and I’m glad he got the chance to make this movie.

And it has something direct to say: Namely, that contra Macklemore, it is NOT, in fact, the “same love.” Gay people act differently and date differently. It’s also probably not accidental that a gay character and his brother have a heartful discussion while playing a video game- the exact same setup as the “know how I know you’re gay?” scene in the Apatow-directed The 40-Year-Old Virgin in 2005.

Eichner plays Bobby Lieber, a popular podcaster in New York, and an out gay man who has reached his 40s without ever getting into a committed relationship. His complaint is that the community is overrun by young and muscled men, and none of them are looking for a guy like him.

Bobby’s worldview is challenged when he meets Aaron (Luke Macfarlane) one of those hot young men, and they get into an opposites-attract type relationship. And this coupling is in the fine romantic comedy tradition — see When Harry Met Sally, and about 30 different Woody Allen movies — in which the male romantic comedy hero is a neurotic New York Jew, and his love interest very much isn’t.

Eichner is fantastic here, showing never-before-scene dramatic chops, getting to both give a heartfelt monologue on a beach, and sing an original song. Well-known LGBTQ performers are all over the cast, from comedian Guy Branum to Married With Children veteran Amanda Bearse to Dispatches from Elsewhere‘s Eve Lindley.

The movie’s B-plot, as it were, is that Bobby is part of the committee putting together New York’s first LGBTQ museum, and none of the different members of different branches of the community can agree on anything. Everything about this plot is absolute gold, from a wild fundraising pitch to the museum’s ultimate design, to the many different arguments. It’s a lot like Dave Chappelle’s routine about “The Alphabet People,” except without the sneering contempt, and concluding on a note of hope.

The gags are nonstop, and almost always great. The supporting cast is very strong and filled with cameos; the bit in which Debra Messing explodes about gay men always thinking she’s their friend is the funniest thing she’s done since the early years of Will & Grace. (Except the joke, about Messing facing cancellation over calling herself “The Viola Davis of Tufts” doesn’t work, because Messing went to Brandeis, not Tufts.)

Sure, there is one of those romcoms when, in fact, the couple maybe shouldn’t be together. And one gets the sense that Bobby should try to find a gay guy in New York City who shuns the gym and steroids and is more Bobby’s intellectual speed? I imagine there are lots of them.

Bros comes out September 30, and it’s far from just an identity politics and representation win- it’s successful as a comedy in just about every way.