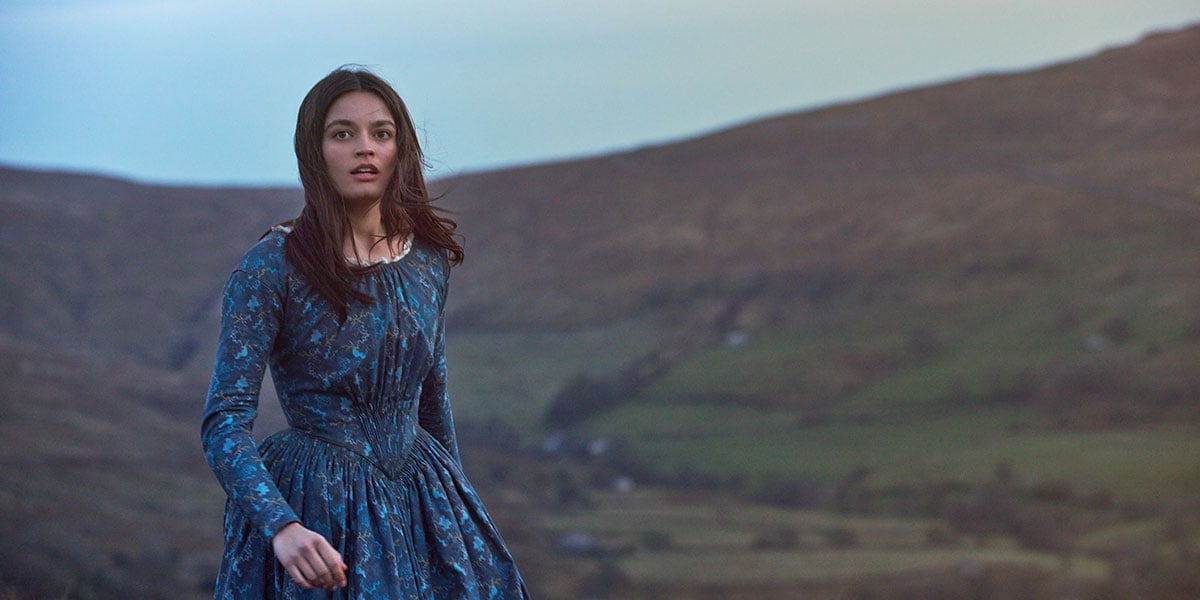 Actor-turned-director Frances O’Connor’s hauntingly beautiful and dazzlingly ethereal Emily is a highly speculative portrait of the famed author’s turbulent path to writing the literary classic “Wuthering Heights”. And yet, it taps into a rare, visually poetic vein that wonderfully captures the bracing truth of her experiences, even though much of what’s depicted didn’t happen.

There is a playful wonder to the film’s portrayal of the trials, tribulations, and aching romances that honestly underpin the classic writings we have all come to know. With this stunning debut, O’Connor suggests that only the emotive truth of the prose is what matters, not the mere facts of what transpired. While the real Brontë may not have been on screen, this vibrant tale acts as an indelible shadow-truth that will endure long after the facts have turned to dust.

Branded as “the strange one”, The second youngest of the Brontë siblings, Emily (Emma Mackey) has an overflowing imagination and innate disregard for the era’s social formalities. Unabashedly the black sheep, her unruly disposition and predilection for intoxicants not only lead her down a path of artistic discovery but also romantic ruin — as she strikes up a surreptitious and perilous lover affair with her French tutor (Oliver Jackson-Cohen).

Evoking the painterly lens of Stanley Kubrick’s Barry Lyndon, the film’s sonic and visual design is brilliantly layered in its composition, lending a decadent and epic sheen to its tale of heartbreak, self-discovery, and familial strife. Moreover, the lush imagery also imbues its depiction of the West Yorkshire moors with a melancholic quality that is only emboldened by its gorgeous natural lighting. This in tandem with the witty, lyrical, and utterly moving dialogue creates a singular and completely enthralling experience that gracefully moves towards its conclusion with a sweeping tide of earned emotion.

While the film is sophisticated in its evocation of Emily Brontë’s tumultuous life, it is distinctly funny, bursting at the seams with wit and slyly eloquent humour. Despite it relying on the framework of a traditional bio-pic (at times too heavily), O’Connor taps into the same verdant beauty and romantic ripostes that inspired her subject, allowing for an experience that both excel as a swooning romance and as a powerful exploration of a woman attempting to realize her vocation.

While steeped in great technical craftmanship, it is never overindulgent, instead submerging its liberal approach to Brontë’s journey of self-discovery in an authentic and sincere aura, making it utterly resonant and believable as to why she goes against the current European norms and opts for the defiant and brazenly mischievous route.

Despite being an unequivocal visual marvel, Emily would be nowhere near as profound without its bevy of revelatory performances. Emma Mackey cements herself as a name to be remembered, as her nuanced turn seamlessly embodies the contemplative and rebellious demeanor of this fascinating persona. She is in complete command of her surroundings, elevating the tactful script with a fiery passion.

Fionn Whitehead as Branwell, Emily’s brother and sole ally, is also a delight to watch as his euphoric bumbling, stumbling, and dancing enlivens the film’s fervent witticisms. Oliver Jackson-Cohen, as William Weightman, Emily’s tortured lover, pierces the audience with his elegiac eyes, which poignantly embody his character’s utter acquiescence to his desires—in direct conflict with his flowery sermons, which see godliness in chastity.

Emily is a dazzling debut from Frances O’Conner. It finds immediate and stirring truths in speculation while it unconventionally enthralls and immerses you into its lamenting vision of a life spent seeking the impetus for artistic creation. Midway through the film, the adage “freedom in thought” makes a lasting impact not only on Emily’s trajectory but also on our own. As we hope to find the same kind of liberation in our own personal reflections.

Bros is as Hilarious as it is Groundbreaking