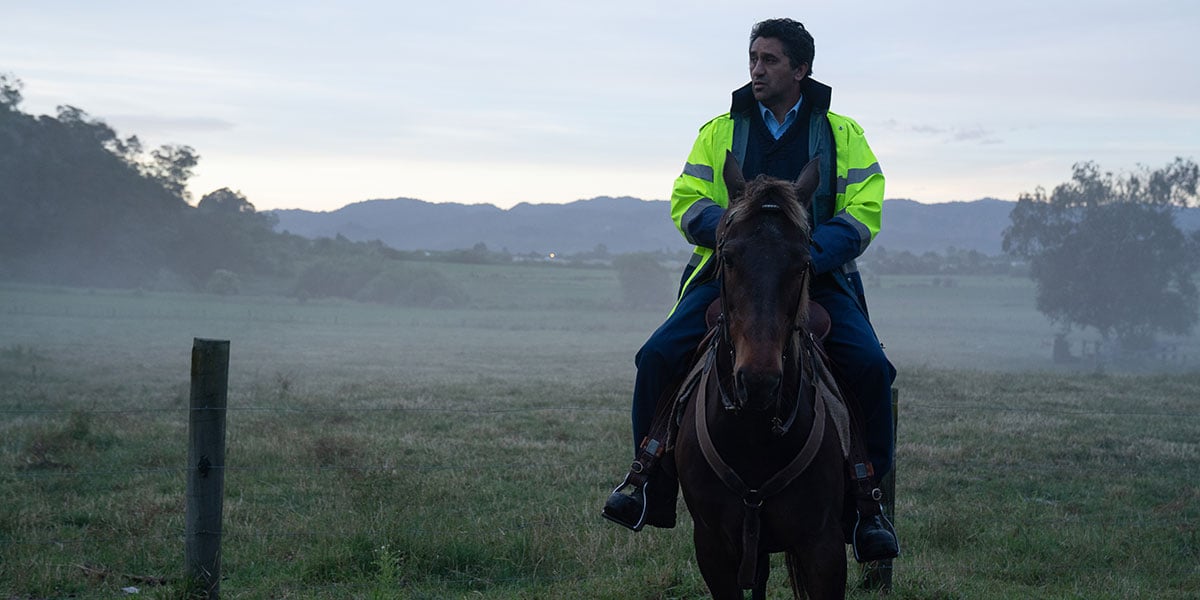 A tense standoff between a tight-knit Indigenous community and New Zealand police serves as a reminder of the ways in which those in power react to even the slightest suggestion of dissent. Tearepa Kahi’s Muru is a constantly unnerving experience and one that does away with subtleties to make its point clear and concise. As a result, the New Zealand director not only provides a stirring portrait of repeated discrimination, but also a suspenseful thriller that provokes an emotional response at every twist and turns.

Muru is also home to one of Cliff Curtis’ best performances yet – an actor who has always delivered when given the opportunity but more recently finds himself with meatier roles such as in Murina and Doctor Sleep. Portraying a Māori police officer (Curtis himself is of Māori descent) caught between his role as a sergeant and his relationship with the Tūhoe people he protects, Taffy is now struggling to come to terms with the police’s sudden interest in Tame Iti’s (playing himself in the film) Māori-rights activism. Believing recent remarks of his to be seditious and his survival-skills camps to be breeding terrorists, the New Zealand police initiate a raid to stop Iti before anything happens.

However, it’s clear by Taffy’s interactions with the community that perspective is what’s needed here – especially when the raid is not the first time the police have enacted violence against the Tūhoe people. Kahi’s film opens with an incendiary tone that sets the stage for Muru’s unflinching and blunt response to the police’s past raids on Tūhoe communities. A history of prejudice and pain has been perpetuated since 1916 and while Muru is a fictional film, its events are very much inspired by the real-life oppression within that community and the raids that have occurred.

Driven forward by the divide between morality and professionalism, Taffy’s personal experience within his home community underlines Kahi’s perspective throughout the film. Very rarely does Muru even pretend to care about the judicial and professional obligations of Taffy in the face of a very real threat from the police – his concerns are almost always revolving around the community he protects and is quite clearly being unfairly targeted. The obvious bias in Taffy’s life is that this is his home and that he is more privy to understanding the Tūhoe perspective than the government officials sitting in their office worried about off-handed politically-charged remarks.

It’s the characters and details that get focused on by the police that provide all the context needed to understand the biases in place. Strong performances from the supporting cast, including Poroaki Merritt-McDonald as the delinquent Rusty whose care for the Ruatoki community is poorly represented by his constant run-ins with the law. If not for the support of those around him, Rusty would be the poster child for teenagers raised to be a domestic terrorists – at least, that’s how it looks to the officials sanctioning a raid in the first place.

There’s an intensity to Muru that can’t be shaken. Once the raid actually begins it’s a claustrophobic experience where tension is exacerbated by Fred Renata’s suffocating cinematography. It’s an up-close-and-personal film and one fueled by anger and unrest in both the screenplay and the film’s inception, so the camera’s shakiness and inability to distance itself from the characters underscores the vehemence of Kahi’s screenplay.

It’s Curtis that really stands out here though with his empathetic performance surrounded by hatred and angst. That his character is forced to essentially pick a side ends up providing a quiet frustration in his nuanced execution. There’s a requirement of the role to feel like the world is completely on his shoulders when in actuality, he’s merely a piece of the puzzle. It results in a performance that is both complex and easily understood.

Kahi’s screenplay is frighteningly suspenseful due to how it anchors the fictional storyline with reality. There’s hardly a moment to breathe and as events unfold, Muru continues to leverage the role of perspective in maintaining order. A young adult evading the police; an act of violence unseen; a comment fuelled by anger caught on camera; it all comes down to context and perspective. There’s a reason that Muru never feels like it gives both sides equal footing as well: the power dynamics are almost always in the favor of one side, meaning the other side is the one that needs its perspective shown.

That’s the heart of Muru when it finally winds down to its rattling conclusion: a journey through a history of discrimination, perpetuated even to this day. While the actors bring a realism that maintains the emotional current through the film, Kahi’s screenplay is a call-to-action that illuminates history’s presence in New Zealand today. To pretend that bygones remain in the past is demonstrably naive and it’s through the intensity and incendiary tone of Muru that open wounds fester without the opportunity to heal.

Thunder is an Absorbing Testament to the Joys of Experience