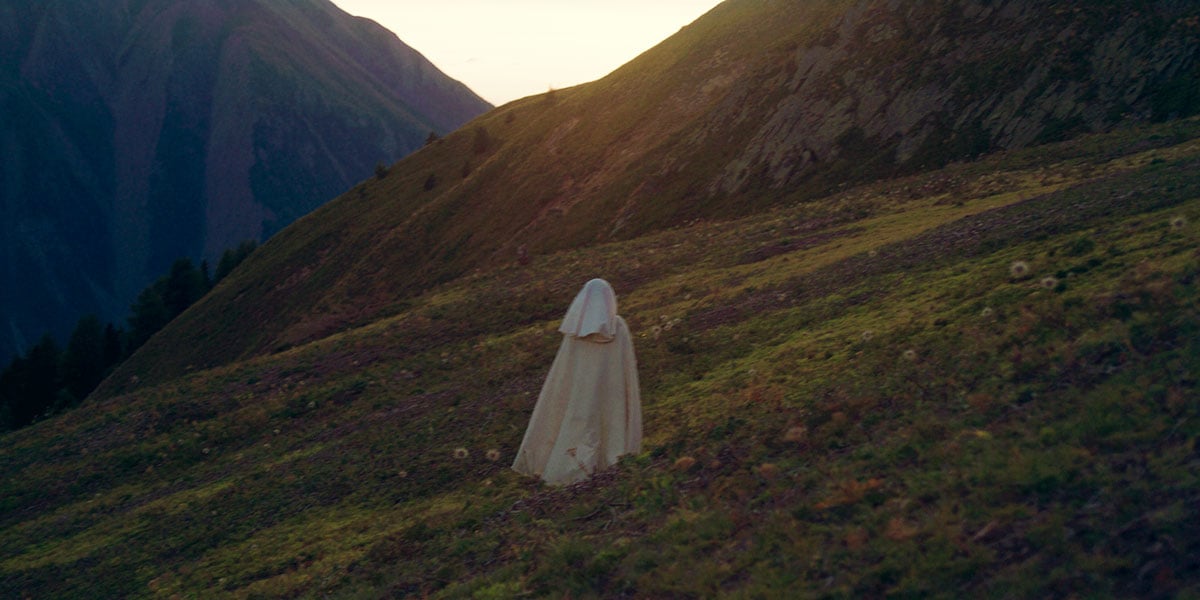 After the mysterious death of her sister, a young novitiate is forced back home to help tend to the family’s fields in their remote Swiss village. However, it doesn’t take long for 17-year-old Elisabeth (Lilith Grasmug) to discover secrets surrounding her sister’s death and why everyone in town refers to her as the Devil’s spawn. In an unflinching look at 1900s Switzerland and a village overcome by their dedication to God and purity, Carmen Jaquier’s inquisitive Thunder is a rapturous feature debut that is as earnest in its pursuit of catharsis as it is accepting of its inability to be an individual in a God-fearing world.

The events that led to Elisabeth’s sister, Innocente’s death are seemingly known by all in her family’s village. After all, it’s small and word gets around quickly. Innocente seemingly strayed from God’s light and now her family won’t even utter her name believing her soul to be condemned to wander. However, Elisabeth is not content with letting her sister’s memory be forgotten. The irresistible allure of summer in the sprawling fields and luscious mountains, combined with the words left behind by Innocente in a journal, awaken something in Elisabeth that sees her experience the same feelings that consumed her sister.

It’s the softness of Marine Atlan’s photography in the film that pulls the audience into Thunder’s dreamlike atmosphere. Oppressive as its religious trappings may be, the Swiss valley where Elisabeth finds herself is gorgeous despite the restrictions placed upon her. As her two other younger sisters fall into place by their mother’s side, Elisabeth cannot resist the temptation of wandering the forest and embedding it within nature itself. The striking beauty of the world around her carries an ethereal quality that transforms into the awakening that brings Elisabeth closer to God but further from home.

An inescapable encounter with three childhood friends – now grown into young men – begins shaping Elisabeth’s summer even further and worrying the family that they may lose another daughter to temptation. In Jaquier’s screenplay, there’s very little room for women to exist without having to apologize or atone for their sins. What they’re apologizing for though is ultimately being born as a woman, and can be seen in multiple scenes that punish women for unavoidable circumstances or refusing to integrate “properly” within a religious society.

There’s a meandering nature to Jaquier’s screenplay as well that lets Elisabeth’s character thrive within the quiet and unknown. Time seemingly stops under the summer heat as the sun beats down on the fields where she rests and ponders what it means to truly love God. While there’s also a lack of subtlety with Thunder it’s also a film more preoccupied with the experience than the narrative. That experience though is one which colors the entirety of Elisabeth’s arc, moving between chilling and freeing ramifications of simply learning how to exist outside of a framework that disenfranchises and binds its purveyors.

Thunder may be Jaquier’s first feature-length film, but its confidence and willingness to linger on the moment suggest a writer-director imbued with potential. Though it never is as stirring as its imagery and a wonderful performance from Grasmug, Jaquier’s screenplay captures a very real feeling of discovery and the freedom that allows. There’s a universality to its acceptance of giving in to life’s wonders that never overshadows the otherwise narrowly-focused condemnation of how women are treated under religious rule. The notion that accepting God means giving up living life is preposterous and Thunder wisely explores that headfirst in an absorbing drama that knows it is better to feel than not.

Butcher’s Crossing is a Surreal and Uneven Western