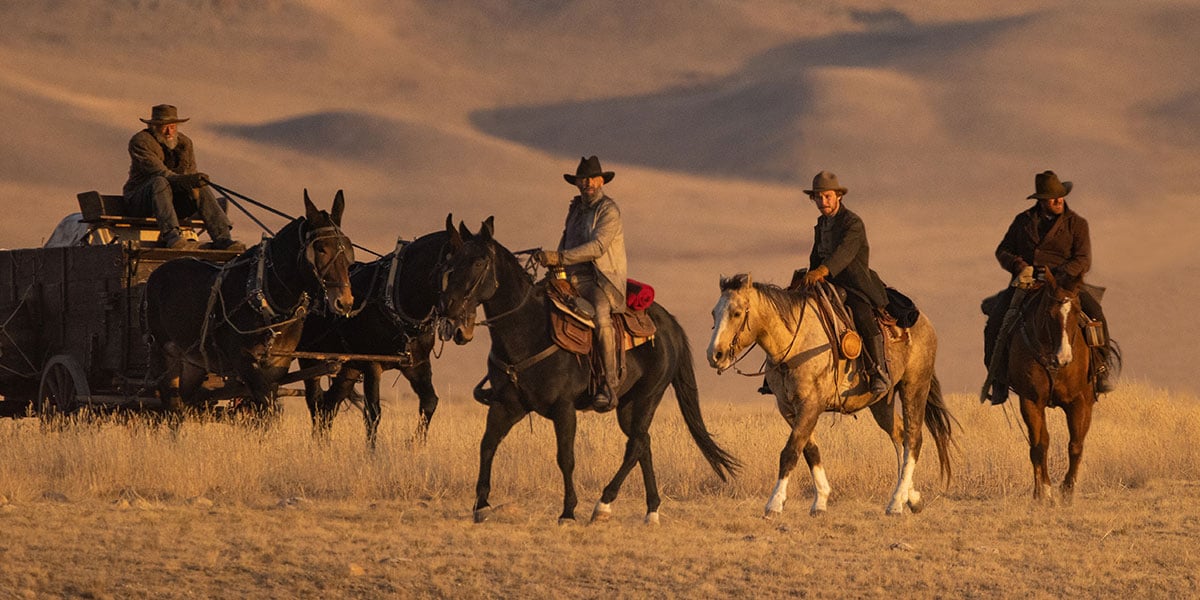 The Wild West’s version of the American Dream is nearing its end when we meet young Will Andrews (Fred Hechinger) as he hastily leaves Harvard to pursue more life-fulfilling pursuits. Searching for the zest of life, Will’s keenness to open his arms to new experiences is put to the test in Gabe Polsky’s Butcher’s Crossing. His latest film explores the hubris of man in the face of nature’s ability to give and take in equal measure. A sturdy and subdued Nicolas Cage leads the otherwise rocky adaptation of John Williams’ western novel.

When Will arrives at the town of Butcher’s Crossing, he’s immediately out of his element. The young college dropout has become obsessed with the idea of the wild west and making a life out in the wilderness, but his experience with anything rugged is nonexistent. He needs a hunting party to show him the ropes and is more than willing to dive headfirst into an expedition when he meets Miller (Cage), a buffalo hunter dreaming about returning to a valley he knows is teeming with buffalo – each hides far more impressive and valuable than what is being dragged into the town by other hunting parties. With Will’s financial aid, his right-hand man Charley (Xander Berkeley), and buffalo skinner Fred (Jeremy Bobb), Miller finally has the team he’s needed to tackle the most lucrative of opportunities.

There’s a nagging sense that everything that can go wrong will go wrong right from the beginning though. A novice plunging into a legendary expedition alongside the drunk and overly religious Charley, as well as the antagonistic Fred who questions every remark made by Miller, it becomes an inhospitable trek where the writing is on the wall. Can Will truly find whatever he’s looking for out in the wilds instead of in his books? It doesn’t take long for Will to begin experiencing the same persistent doubt that anything good can come from his journey with Miller.

Clearly modeled after Marlon Brando’s performance as Col. Kurtz in Apocalypse Now, Cage is doing some solid work once the writing picks up and finds its groove within the surreal hellscape that Miller is creating for the crew. It’s a much more restrained performance from Cage as his character becomes blinded by ambition and the relentless pursuit of capital. In the Colorado Rockies, they find more than just the call of the wild and buffalo hides for days; they also confront their own demons.

Unfortunately, outside of Cage, the performances vary greatly. Hechinger’s extremely green and innocent character never really feels like parody at times, while Berkeley’s drunk preaching and bouts of insanity mesh with the absurdist tone the film takes on but rarely stand out outside of that. Bobb’s embodiment of the grouchy Fred is perhaps one of the few performances that really holds up against Cage’s, but it’s surrounded by very stilted delivery and an incessant feeling that Butcher’s Crossing is actually more of a stage play than it is a film. Even an esteemed actor like Paul Raci feels like he’s being force-fed dialogue and is reluctantly present for it.

Largely, it’s a problem with adaptation. While Polsky’s film manages to present itself in a cinematic manner with its absurdist and surrealist overtones, it also takes a while for it to stop taking fragments of Williams’ dialogue from the novel and using that as a crutch. Without a strong lead performance as the character of Will, a lot of the dialogue finds itself stilted and rushing along a plot that eventually leans more into its themes of nature, religion, and the role man plays within it. There’s even the incorporation of one of the town’s prostitutes, Francine (Rachel Keller) that is shoehorned in there seemingly just because it exists within the book. It doesn’t leave as large of an impact as it does in the novel, though.

Butcher’s Crossing does eventually find its footing and the steadfast nature of Miller’s character never comes into question outside of the characters refusing to accept the path they’ve been led on. There’s an understanding within the film that Miller’s behavior is more than just hubris – it’s a crusade against nature itself. Along for the ride though is Charley who frequently remarks that God gives just as much as he takes away. The cruelty of Miller’s actions against the buffalo – an almost relentless violence – bears the weight of its consequences.

While its ending feels thrust upon the viewer in a game of happenstance, it’s also ruminative on our relationship with nature and how we perceive its rewards as endless despite there being an obvious limit to it all. Miller’s pursuit of a valley not overrun by hunters already seems like a dream, and the final act of the film puts as fine a point on it all as it can. It can be seen in Miller just as much as Will. The town itself represents the fleeting resources that can be provided by nature and how an over-dependence can lead to ruin.

There’s nothing nice about Butcher’s Crossing as it relentlessly cements the notion of greed and the overambitious destroying nature itself. Polsky begins and ends in the same hasty manner, leaving the only powerful moments buried within a mountain of below-average to average execution. There’s an undeniable uniqueness to the way Polsky shows Will and Miller’s arcs, but it all amounts to very little by the time the credits roll and the Wild West of the 1870s remains a distant time and place. A sturdy enough platform for Cage to deliver another interesting performance, but Butcher’s Crossing feels more like a footnote than it does an imprint on the Western genre.

Thunder is an Absorbing Testament to the Joys of Experience

Bones of Crows: A Vital Reminder of Violence and Trauma’s Lingering Pain