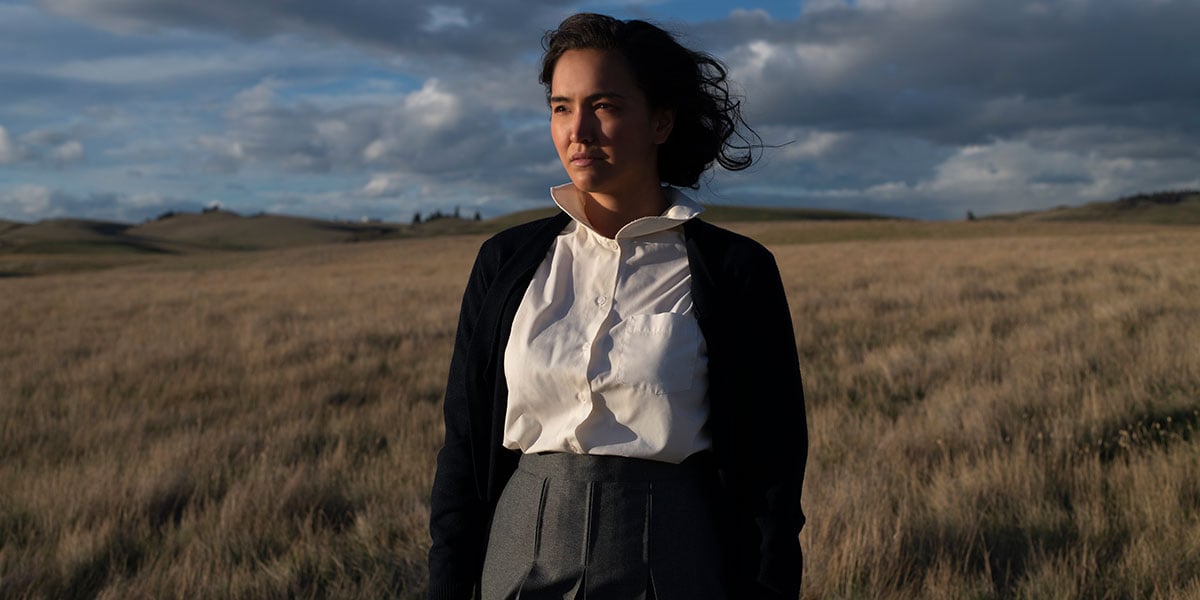 Through determination and self-preservation, Aline remains weathered but strong-willed in the face of continued discrimination. A history of trauma shapes who she has become and through Marie Clements’ harrowing portrayal of the impact of residential schools on Cree and other Indigenous peoples, Aline represents resilience under constant assault. Clements’ latest film, Bones of Crows has a very single thought on its mind and attacks racism and prejudices with an equal measure of anger and sadness.

Opening with a cruel joke played on Indigenous slaves by a White man in 1800s Manitoba, Bones of Crows quickly shifts from its stirring thesis statement to the life of Aline (played by Summer Testawich, Grace Dove, and Carla Rae, each during a different period in her life). Torn from her home in the 1930s along with her sister and brother, she is sent to a residential school where she is met with only pain and suffering. One of many dark parts of Canada’s history, residential schools continue to resurface in the news as more and more unmarked graves of children are found that were forced to attend these schools where their identity and culture was stripped from them.

It’s a harrowing subject that Clements handles with care, refusing to look away from the horrors but not leaning into it for shock value. As the film zigzags between moments in Aline’s life, it becomes disorienting but the foundational trauma from her experience at a residential school color every interaction. Moments of violence and despair punctuate an otherwise standard look at the way trauma lingers and finds a way to cripple progress as it reappears.

Bones of Crows does not restrict its focus to just Aline though, as she encounters many others who have been subject to either similar circumstances or other traumas perpetrated due to their race. Her sister finds herself on the wrong side of the law more often than not, and Aline’s husband finds his past traumas inseparable from his career in the military. Meanwhile, Aline has adapted to a White man’s world, but she’s also remained careful not to stand out too much by avoiding speaking Cree or stepping out of line. Her dreams and ambitions were taken from her long ago and have rendered her invisible as she looks out for her own family and no one else.

Unfortunately, Bones of Crows goes from an initially impressive black-and-white photography to serviceable but unremarkable cinematography. Some shots stand out, but they’re few and far between. In fact, like the photography, the biggest problem with Clements’ film is that it seems composed of moments strung together. It has an autobiographical quality to its structure but its uncanny ability to sell its most harrowing moments is undercut frequently by performances that always feel slightly stilted. It works in the case of Aline and as we see her older it’s much less of a problem, but with others, it’s far more noticeable.

This doesn’t take away from the importance of Bones of Crows and its subject matter, but it does undermine the potency of its delivery. The film culminates in what is essentially an abbreviated recap of the history of residential schools and testimonies from real-life survivors and that helps leave a lasting impression once the credits roll, but Clements’ film is a bit too long-in-the-tooth and through its complete exploration of a survivor it ends up hitting many of the same beats during its runtime. Bones of Crows, like Night Raiders, has the opportunity to teach through its character work and comprehensive understanding of its subject matter; which is why even with its faults, it’s still a vital piece of cinema.

Butcher’s Crossing is a Surreal and Uneven Western

The Inspection is a Heartbreaking, Fact-Based Tale of a Gay Soldier