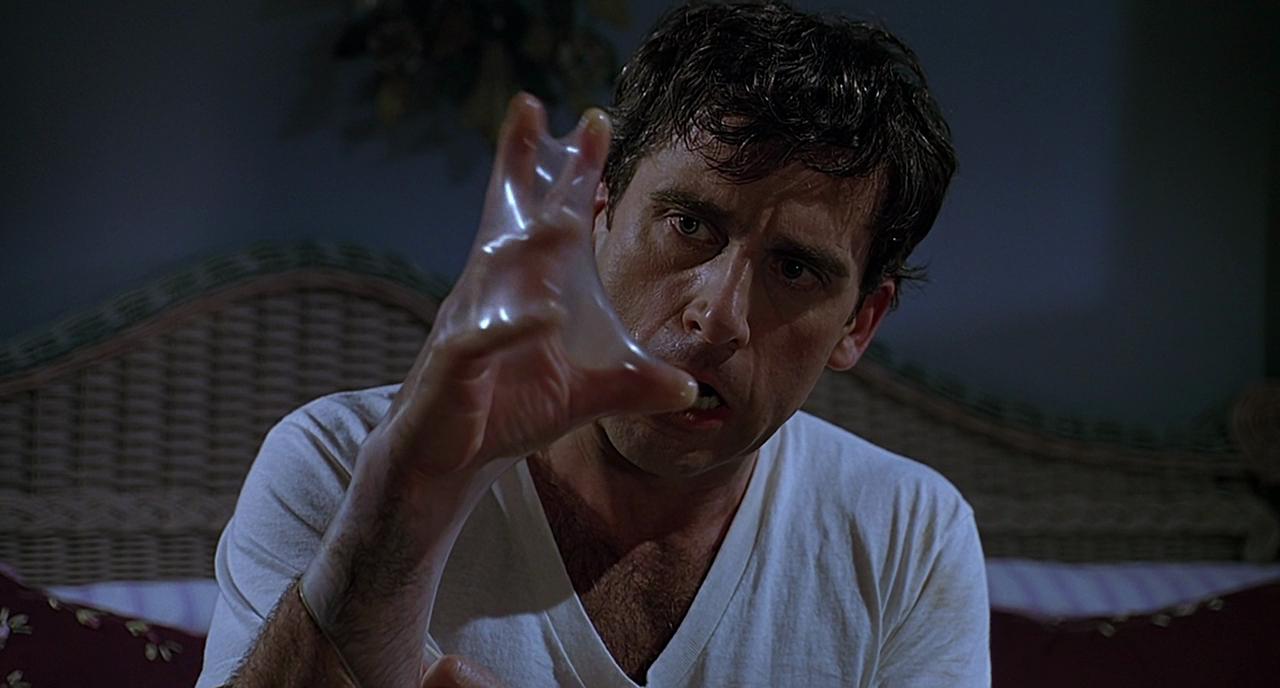 Shortly following the turn of the millennium came a transitional moment in Hollywood humour. Comedies featuring adolescents and comedies featuring adults had never been a rare sight, but following the Farrelly brothers’ There’s Something About Mary (1998), the maturation of the American Pie (1999) series, and particularly with the rise of the Frat Pack (a term coined in a Variety review of Old School (2003)), it became increasingly popular to combine the two, and to blur the line dividing maturity and immaturity that is supposed to magically appear during the progression into adulthood.

Suddenly, it was common to see films reversing the coming-of-age narrative of many teen comedies, continuing the natural progression of slacker films such as Clerks (1994), and intensifying the feckless nature of adults from examples such as The Big Lebowski (1998) and Office Space (1999). The Frat Pack were at the forefront of that change, and their movie Anchorman: The Legend of Ron Burgundy (2004) was its harbinger, arriving a year after Old School saw pseudo-adult Will Ferrell peer-pressured into partying with teenagers, and after a group of sex-obsessed students had aged physically, but not mentally, for American Wedding (2003). The movie became a sleeper hit that would amass the majority of its popularity through DVD sales in 2005, and the film’s producer, Judd Apatow, was readying his directorial debut, requiring a lead actor who could play sensitive and hilarious in equally successful measures.

Then, Steve Carell’s name appeared at the top of the poster for a new comedy named The 40-Year Old Virgin, a film that went on to earn close to $180m worldwide after crystallising these new trends in comedy within the popular conscience. The Office (Carell’s then mildly popular TV vehicle) was renewed until its ninth season, and three of Virgin‘s actors – Carell, Seth Rogen and Paul Rudd – would each perform in nothing but comedy for the next ten years.

The movie changed many things for many people. In the 1980s, Carell quit his job as a mail carrier because his boss told him he was terrible at it; but after Virgin, he quickly appeared in fourteen films over the next ten years that had grossed over $100m, which is at least one per year excluding 2009 when he didn’t make a feature film at all. However, in a movie-going climate wherein a film’s marketability depends increasingly upon whichever franchise it belongs to, the role of the name ‘Steve Carell’ in promotion of the Despicable Me films – his biggest hits – is debatable at best. But looking at the successes of Crazy, Stupid, Love (2011), Hope Springs (2012) and Alexander and the Terrible, Horrible, No Good, Very Bad Day (2014), all mid-budget and high-grossing indies, it’s suggestible that Carell’s was one of the few names that could still sell a Hollywood movie. And it all started in the same way as many great things in life: with a boner.

That’s Andy. It isn’t a particularly extensive character introduction, because it doesn’t need to be; not only is there very little going on in the protagonist’s life (he spent the previous Friday night making an egg salad sandwich), but also, the title has already done most of the work. The virginity comedy had earned megabucks with American Pie, but immediately, Virgin recontextualized that for middle age, putting a new spin on an increasingly dull idea. Indeed, the title itself is a delectable hook, suggesting something that is almost unthinkable in our (still) over-sexed society, which explains why the title continues to feel fresh today. Nearly two decades may not seem like a long time, but it certainly can be when a movie is as replete with pop culture references as this one.

And when a movie is as replete with improvisation as this one, it’s surprising that so much of it seems genuinely inspired. Apatow’s later productions would continue in this vein to diminishing returns, including Pineapple Express (2008) which feels scrappy and lethargic in comparison, and Get Him to the Greek (2010) which, although funny, is little more than a bunch of guys making a bunch of jokes. But while everything in Virgin revolves around a single, simple premise, it has enough variations to keep it feeling lively throughout. Much of this is accomplished through Andy’s work colleagues who take it upon themselves to get him laid. They are: Rogen’s filthy-minded Cal, Rudd’s overly sensitive David, and Romany Malco’s womanising Jay.

Those characters bring considerable mileage to Virgin‘s comedy, and it’s especially telling that all of the characters believe that sex is a life essential, a rite of passage that will bestow manhood upon all who practice it; however, that doesn’t seem to have worked for any of the characters, all of whom are just as, if not less mature than Carell. This is perfectly encapsulated when Cal and David tease each others’ sexuality in the “You know how I know you’re gay?” scene, reaching a high point of teen-level insults with: “You have a rainbow bumper sticker on your car that says ‘I love it when balls are in my face’”. Later, Jay breaks down in tears, surrendering his stereotypical black-alpha-male front, revealing that he only acts the way he does – womanising and all – because he’s insecure. Even Andy’s upstairs neighbour balks when his wife suggests they get intimate, his otherwise constant stream of sex references quelled by a bewildered “What is wrong with this woman?”

So while masculinity is The 40-Year-Old Virgin‘s driving point, none of the core characters genuinely have any. Eventually, a situation that appears horrifying to most is subverted, and those who are obsessed with sex are presented on equal terms with those who are devoid of it. With that, the film became much more than a sex comedy; it became a mature movie about immature people. That it does this so convincingly, while remaining outright hilarious in the process, is one explanation for why this movie has endured so well. But aside from that and its near-perfect brand of comedy, the real reason the film continues to feel so special becomes apparent during the legendary chest-waxing scene, which is improvised so convincingly that it comes complete with tears in Carell’s eyes: when the scene cuts to show the reactions of Andy’s colleagues, each character responds in their own unique and genuine way, and the sheer chemistry between these actors paints them as genuine friends, a rare feat even in comedies such as these. This makes each individual character arc and interaction seem ever more revelatory, and keeps the film firing on all cylinders throughout its lengthy running time (132 minutes in the Unrated edition).

Tellingly, Carell was not the only benefactor from this movie’s success. Trainwreck, which arrived a decade after The 40-Year Old Virgin, barely even needed a director’s credit, because Apatow’s stamp was all over it. His output may be ostensibly un-cinematic, but that’s precisely why it’s worked; he adapts sit-com techniques for the feature film, creating for fans of shows such as Friends (1994-2004) a compelling attraction for leaving the living room, which is a tactic that is simple yet proven in the battle for audiences between the big and the small screens, and has led to immeasurable success for the still-reliable Apatow chapter of the Frat Pack.

But the stars of Apatow’s establishing blockbuster have all seemingly absconded from the genre altogether. In 2015, Carell earned an Oscar nomination for his terrifically disquieting role in Foxcatcher (2014), while Rudd had also gone serious with Ant-Man (2015) after a decade of nothing but comedy and romances. Even Rogen’s typecast began to change: his role in Neighbours (2014) saw him playing a father trying to remain cool, as opposed to a man-child trying to be an adult, a complete inversion of what we’re used to. Even Apatow began departing from his signature ‘bromance comedies’, having produced the excellent Bridesmaids (2011) to stratospheric success, and later with Trainwreck, appearing to edge more towards female-centric comedy altogether.

Playing in a single genre must certainly become tedious, and it’s no secret that comedy acting is generally underestimated in the grand scheme of things. But consider that, without The 40-Year Old Virgin, Apatow would not have garnered the industry heft that he did (at least not as quickly), and Carell would probably not have even become a star. Instead, the movie confirmed the reliability of its key players and created typecasts that lasted a decade; it established the careers of several others; and it allowed us to see multiple new Apatow movies since. Plus, most of the movie’s main cast – including Jane Lynch and Kat Dennings – have become household names. That’s cultural impact.

Documentary Freakscene Tells the Story of the One-of-a-Kind Dinosaur Jr.

Knocked Up was Judd Apatow’s Controversial Statement on Family