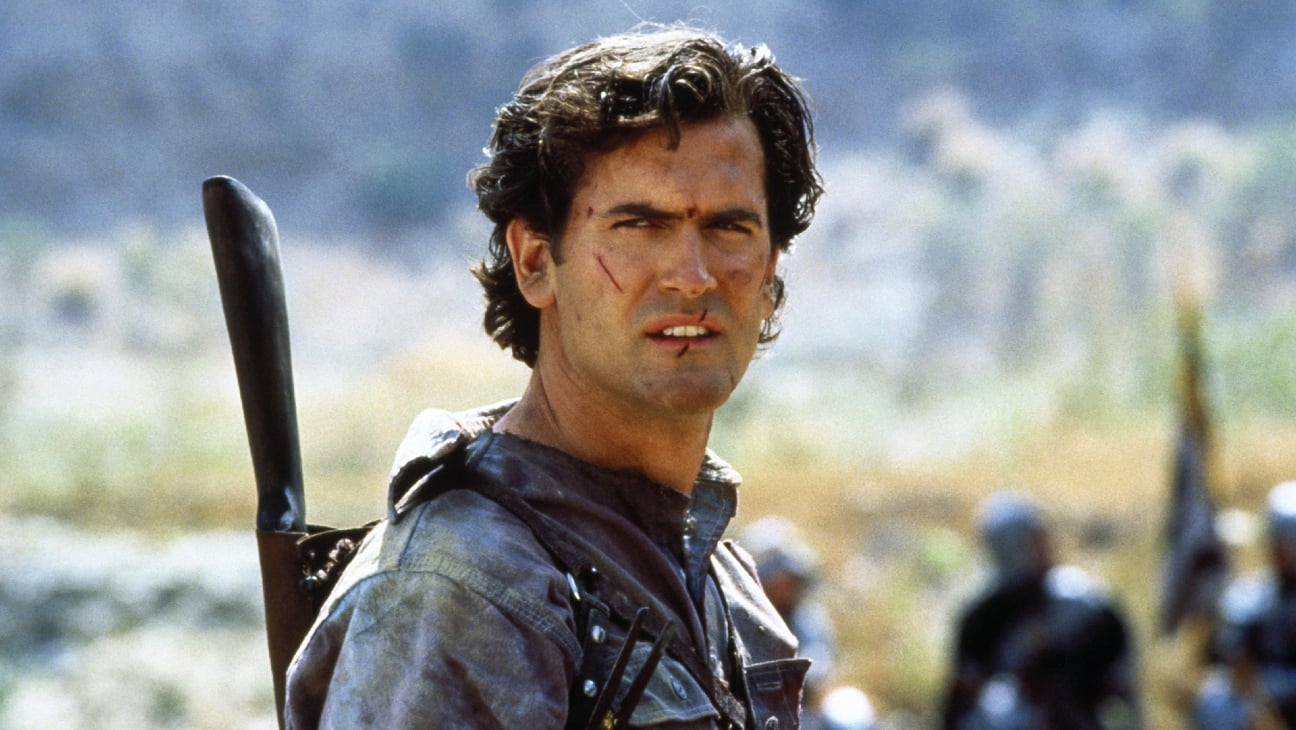 How can you destroy an army that’s already dead?

The Evil Dead series, both in the cinematic and television forms, has a marvelously delirious history. An original film financed on a shoestring budget that plays its horror-centric tone mostly straight but with a few chuckle-inducing moments, a sequel that is, in essence, a remake of the original and was originally supposed to follow the plot of the third film, said third film that goes off in a completely different direction, and later a TV series, 22 years later, that makes no reference to the third installment for legal reasons, therefore technically continuing the story of the first film but unquestionably borrowing the slapstick, overly comedic identity of the third movie. Few popular franchises can claim to have a developmental history has complicated and hard-fought as Evil Dead, although one would struggle to consider that a virtue. All that being said, Army of Darkness, which premiered in 1992 but was only released wide in February of 1993, is arguably the most interesting, unique, and important entry.

Raimi opens the movie with Ash (the inimitable Bruce Campbell) held prisoner in a time long before his own. It is the Middle Ages, and Ash, sarcastic, cantankerous, and egotistical as ever, is chained along with a small group of soldiers and their leader, that evidently found themselves on the losing end of a battle against Lord Arthur (Marcus Gilbert). Arthur brings them into his fort, where they are taunted endlessly before being led to a dark, deep pit where creatures devour their prey. Ash, comically better equipped to face remarkable dangers despite his pathetic attitude, survives the ordeal, much to the dismay of Arthur, townsfolk Sheila (Embeth Davidtz) but the relief of the Wise Man (Ian Abercrombie), who believes that Ash may the one that can free the kingdom from evil. Ash, armed with his chainsaw hand, and shotgun (baptized as his ‘boomstick’) remains uninterested in their plight, concerned only with returning to his present day. The Wise Man explains that a mysterious, evil book located far off may hold the key to what each party seeks, but Ash, overly confident and stupendously clumsy, makes an ill use of its spells, unleashing the titular Army of Darkness!

To say that Sam Raimi’s Army of Darkness came off the heels of Evil Dead II would be inaccurate. The truth of the matter is that the Evil Dead films are like the Alien movies insofar as their individual releases are several years apart. 6 years separate the first two entries, and another 6 between the latter two (officially speaking, Army’s premier was in 1992, a cool 5 years after the second picture). That’s an amazingly long time between films, especially in a genre such as horror, which has the nasty little habit of cranking out sequels like it was nobody’s business. To bear witness to a franchise that takes its time in producing each episode is refreshing, although there is a bevy of reasons why so much time elapsed between movies. Following the relative success of the second chapter, director Raimi went on to work for Universal Studios, which ultimately resulted in one of the most unique superhero films ever to grace the silver screen: Darkman. It was only after that that Raimi and his team and Universal invested the effort necessary to make a third Evil Dead picture, and this time they would finally translate the original script idea that would have been Evil Dead II. With backing from a major Hollywood studio and a willing Bruce Campbell (when is he unwilling to work with Raimi?) Army of Darkness was born.

Structurally the film strays very far from the first two, as Ash finds himself thrown back in time and must discover the modicum of generosity he never thought he had inside him by fending off hoards of skeleton soldiers and a hulking evil version of himself in order to protect a small but brave kingdom before returning back to present day. As such, Army is the outlier in the series, even when compared to the TV show. The scope is much grander than anything that had been seen before, with director Raimi and his crack team pulling out all the stops to bring a bygone era to life as best they can, only their version would be replete with many of the ghoulish creatures that haunted Ash and his friends in the first two instalments.

They move. They breathe. They suck.

It is, in a nutshell, a melding of two films: an Evil Dead film and a medieval fantasy action-comedy. No one in their right mind would seriously consider the movie to be an outright horror film. Granted, it features some ingredients that would be right at home in a horror movie, but so much of what Raimi and company want to provide is far more along the lines of an action-adventure story soaked in the sort of slapstick humour Raimi is known for being a humungous fan of. For that reason, it could very well be argued that Army is Raimi’s vision as an auteur at its purist through the prism of an Evil Dead film. While the second film dabbled in a lot of comedy, the third entry features extended sequences during which time little plot is communicated but a lot of laughs are strived for. Film being so subjective, and comedy being one of the more delicately subjective of genres, not everyone will come away from Army with huge grins on their faces. Some scenes do go on a bit long, with one wishing that Raimi gets the story back on track a little bit more. Additionally, with so many attempts at jokes, not everything will land smoothly, but thankfully a lot of the humour in Army of Darkness does. While Raimi’s direction is to thank in parts, much of the credit must also be given to the project’s star, Bruce Campbell, who evidently relishes the opportunity for physical comedy. The actor gives it his all, and whether one finds him funny or not, his dedication is beyond questioning.

Army proves to be the most action-movie oriented of the trilogy as well, with the final third coming off as something of a precursor to the legendary Battle at Helms Deep sequence in The Lord of the Rings: The Two Towers. Sword fights against monsters that, for the most part, are brought to life via stop motion animation, catapult attacks, beheadings, flaming arrows, explosives, and an insanely gadget-adorned car (yes, a car) are the many highlights of the final battle between Arthur’s fortress and the Army of Darkness laying siege to it. Stories abound about how trying the filming process was for Bruce Campbell, who was not exactly adept at fencing and other skills of the same ilk. Nevertheless, the end result is a joyous, raucous affair. The special effects run rampant throughout this sequence, the nature of which makes the film all the more special. Made in the early 1990s and released theatrically just months before Jurassic Park, the movie sports a bevy of very old-school visual effects, reminiscent of the work of the great Ray Harryhausen. It is one of the last major motion pictures to adopt stop-motion to bring its monstrous characters to life before studios fell in love with computer-generated enhancements and imagery, something that had already been explored twice in major ways with The Abyss and Terminator 2.

1 Man, 1 Million dead, The odds are just about even.

Action-packed, overflowing with comedy of the slapstick variety and featuring an unmistakably cocky Ash, Army’s spirit is very much present in the Ash vs. the Evil Dead series. Many have already argued that the Ash present in the show is far more along the lines of that which leads the third movie as opposed to the ones in either of the first two. He is a loudmouth, unforgivably snotty, and way too much in love with himself. Describing him as a man living in arrested development would be putting it mildly. For as much as many people claim the middle film as their favourite, the version of the Ash character found in the third film seems to be the one most fondly remembered, which might explain why that is the one that is, unofficially, of course, brought back in the tv show.

Army of Darkness is an absolutely fascinating motion picture for all sorts of reasons. The era during which it came out, its production history, its place in the film trilogy of Evil Dead films, and its eventual influence on the Ash vs. the Evil Dead Starz television series, despite that, for legal reasons, the show cannot actually make reference to the film that so clearly inspired it. A book could be written on those subjects, and it would probably be a damn fine one, provided it was bound in human flesh!

Vanishing Point is the Perfect Movie for Screenwriting Class. Here’s Proof Why…