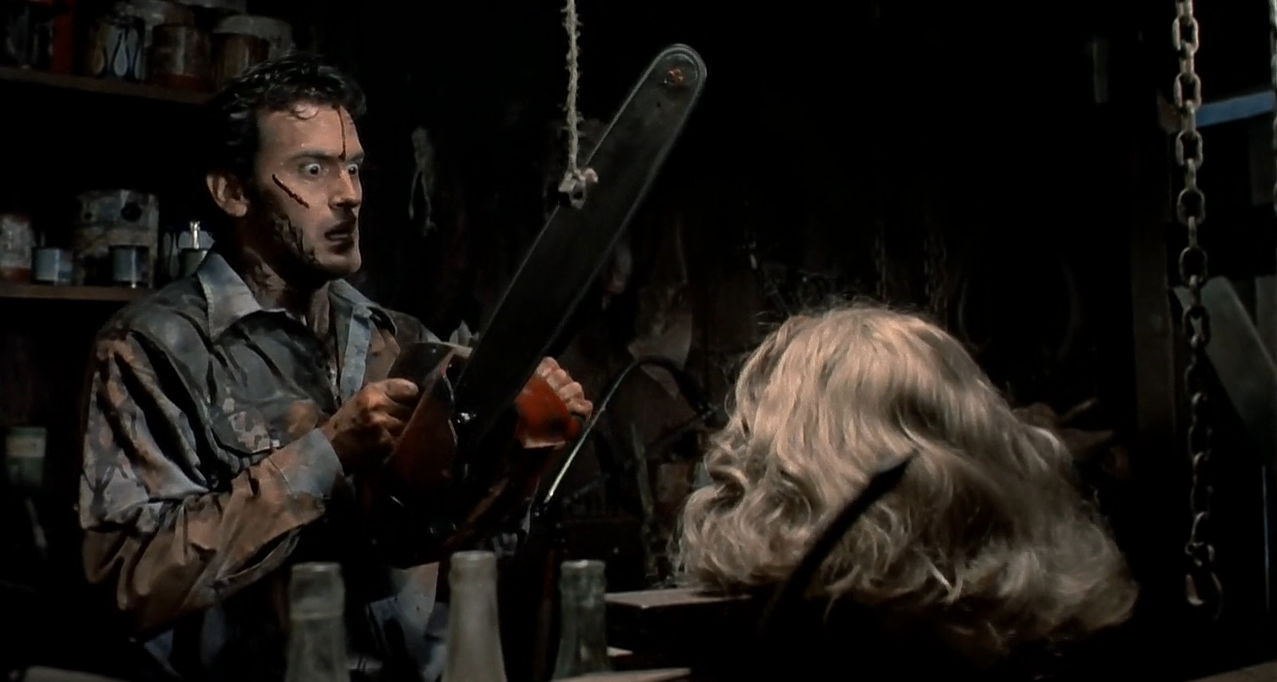 Sam Raimi’s Evil Dead franchise has spawned a TV series, an upcoming survival horror game, and a cult following, gaining much attention due to its pioneering brand of gory slapstick. While the first film started it all, it is Evil Dead II which managed to mix horror and comedy into glorious B-Movie gold.

Evil Dead II begins with Ash Williams, played by Bruce Campbell, breaking into a cabin in the woods with his girlfriend Linda for a romantic trip. We quickly discover that the cabin belonged to an archaeologist who had found the Necronomicon: The Book of the Dead. A mishap involving a tape recording of a summoning incantation releases demonic forces. Things quickly go south. The demon possesses Linda, forcing Ash to decapitate her with a shovel. This is only the prologue to the blood-drenched chaos to come.

After discovering that the bridge leading away from the cabin is destroyed, Ash has to fight to survive the night. A visiting group, including the archaeologist’s daughter and a trail guide, do little to help the situation. If anything, most of the group serve as fodder for the demonic onslaught. ‘Dead by Dawn’ is the subtitle to the film, and the persecuting demons (coined as ‘deadites’) certainly try their best. A solid A+ for effort. However, the manic energy and sheer determination of the hero makes him a foe to be reckoned with.

Bruce Campbell’s performance is a key part of the film’s success. With each new horror, he becomes increasingly unhinged, fully committing to the absurdity of the role. In the face of evil he screams, he laughs, he quips, and he maintains an air of constant unpredictability that makes him an absolute delight to watch. His antics often turn to full-blown slapstick. He becomes a Buster Keaton of the horror flick as his character is subjected to a catalogue of comic threats. A brilliant scene of physical comedy sees his possessed hand smashing plates onto his own head, a scene which is often echoed in the 2018 sci-fi film Upgrade – another gory genre film with stupendous physical acting.

Raimi demonstrates that horror directors and actors can learn a lot from the slapstick genre, as its exaggerated physicality lends so much weight to every blow. Slapstick really gets at the corporality of the body, an essential aspect in effective body horror.

Raimi’s interest in experimental camera techniques also pushed the genre further. The camera is as unpredictable as Campbell himself, sometimes morphing into frantic perspective shots, sometimes panning around slowly, sometimes even being dragged over the floorboards. There is a real creative energy behind this film, one which is often lacking in other horror flicks. Raimi’s interest in the camera and perspective elevates this film above many others in its genre.

While the practical effects are over-the-top in their absurdity, this simply adds to the fun. Evil Dead II takes no half-measures, and is destined to remain a cult classic for many years to come.

Batman Year One: The Best Moments