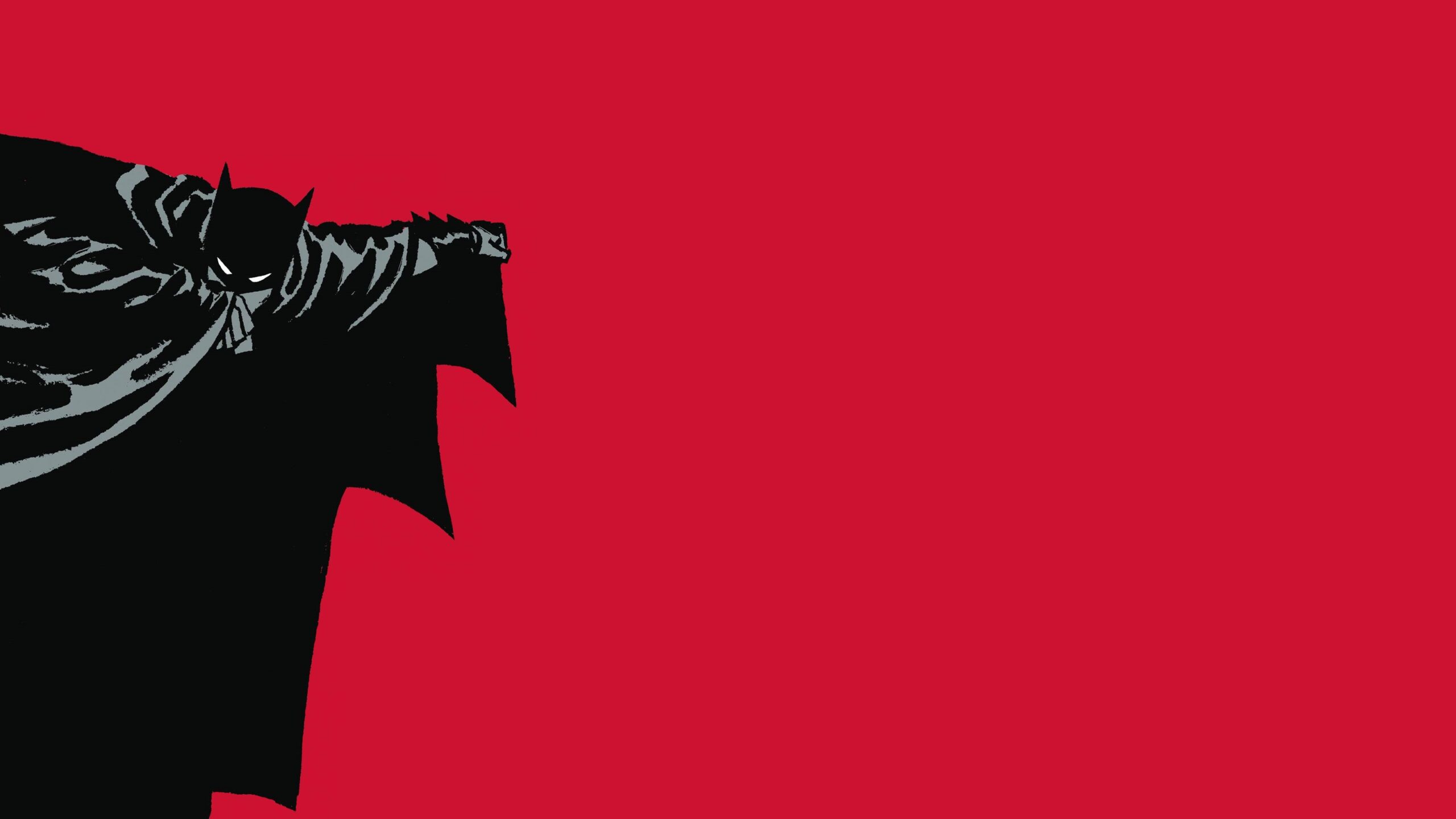 “Batman Year One” was the first Batman (and DC) comic I read back in 2010. The things that stood out to me were the poetic nature of Frank Miller’s writing (mainly the caption boxes), the parts that Batman Begins homaged, and how Jim Gordon seemed to have more page time than Batman. After rereading this story a few times over the year, I realized that Frank Miller and David Mazzucchelli could have named this story “Jim Gordon Year One” and his ups and downs as he goes from a do-gooder cop from Chicago to an overworked Gotham policeman who has an affair with one of his co-workers to an ally of Batman. His character arc is just as compelling and more down-to-earth than Batman’s. Letterer Todd Klein shows this more grounded story by using more traditional letters in contrast with the fancy cursive script he uses for Batman’s caption boxes. However, both characters have their share of great moments in “Batman Year One,” which is also a little bit of an origin story for Selina Kyle’s Catwoman too. Sit back, relax, and enjoy this highlight reel of the best parts of “Batman Year One” in chronological order.

From the first page, David Mazzucchelli gives Gotham a gritty, crowded feel, especially when he shows new police lieutenant Jim Gordon huddled on the train with no room to move. This follows from an establishing shot that features great use of grey scale from colorist Richmond Lewis (This was before digital coloring techniques.) and minimalist, restrained writing from Frank Miller. Without showing any violence or crime, Miller and Mazzucchelli show that Gotham is a city without hope and will be a tough time for a good cop like Gordon, who sees corruption and brutality almost as he gets off the train. This first panel establishes Jim Gordon as an outsider with a bit of a guilt complex, and Gotham as a dangerous place to be. These themes are explored in greater detail throughout “Batman Year One”, and Miller and Mazzucchelli take their time setting up the atmosphere of Gotham before any crime-fighting or action happens.

At the end of the first issue of “Batman Year One”, Miller and Mazzucchelli shows the more violent side of Jim Gordon when he gets a little payback against corrupt cop Arnold Flass, who had beat him up earlier for actually trying to keep law and order in Gotham. Before he gets to the beating and stripping, Miller’s caption boxes show Gordon’s intelligence as he lets Flass’ other corrupt police friends go home to their wives and mistress after a poker game so that he can fight Flass alone. Gordon also shows restraint when he fights Flass and doesn’t break any bones or cause any obvious injuries that would be suspicious, but just enough “to keep him out of the hospital”. This fight scene also shows that Gordon understands that only fear can keep order in Gotham and beating up and stripping Flass naked sends a message  that Gordon and his pregnant wife are off limits for him

In the last couple pages of its first issue, “Batman Year One” changes from a hardboiled crime story into something mythical and seminal. Mazzucchelli uses an economy of panels and images as Bruce Wayne has an epiphany that what scared him as a young boy and even now can strike fear into the hearts of criminals. There are so many layers to Mazzuchelli’s storytelling in these five small panels. The bat lands on a bust of Bruce’s father and acts as a projection of his anguish over his father’s death. Richmond Lewis uses a mix of black, yellow, and white to show the colors that Batman will eventually wear even if his costume is grey and black in “Year One”. Todd Klein’s cursive script is a little hard to read, which makes readers take time to process Bruce’s thoughts and motivations for becoming Batman. The only way for Bruce to make sense of his life is to become more than a man, to take on a primal emblem, and make sure that what happens to him as a child doesn’t happen again on his watch.

This is the first real Batman moment in “Year One” as he decides to crash a fancy shindig and terrify Gotham’s upper crust, including the police commissioner Gillian Loeb and the mayor himself. Mazzucchelli almost uses a splash page and wraps Batman in billows of smoke as Lewis continues to cut the colors out until they become completely black. Miller gives Batman a short, powerful speech that has become the gold standard for intimidation. And Loeb immediately takes action the next page as he tells Gordon to take down Batman or lose his job. This moment could be considered the climax of “Batman Year One” as Batman finally establishes himself as a force to be reckoned with, and one that even frightens the most powerful people in Gotham. It also contrasts with a Batman, who earlier barely got out of a fight with some teenage gang bangers where he learned that atmosphere and theatrics go a long way into stopping crime at its root.

In its quieter moments, “Year One” has some nice comic relief to balance out the darkness. One of these scenes is when Jim Gordon interrogates crusading assistant District Attorney Harvey Dent, who he thinks is Batman. It’s talking heads until Mazzucchelli cuts to Batman stooped behind Dent’s desk. He’s been there the whole time. Miller and Mazzucchelli show the beginning of Batman and Harvey Dent’s friendship without cutting too much into Jim Gordon’s story and also give readers a chance to relax for one panel until Gordon’s partner Sarah Essen pieces together that Batman could be Bruce Wayne because he is wealthy enough to afford the costume and gadgets and has a motivation in his parent’s murder by a criminal. This scene shows that Batman isn’t the only competent detective in Gotham and also shows why Gordon becomes attracted to Essen. In a subtle way, both men are at their most vulnerable.

In Batman #406, Miller and Mazzucchelli put Batman in the worst possible situation. He is surrounded by a SWAT team, the building he has taken refuge in has been firebombed, and he has lost his utility belt. He has one blow dart and a special Wayne Enterprises gadget. Batman #406 is filled with suspense as Batman runs out of room to maneuver and is seemingly cut down by a hail of bullets, but calls on his original ally: bats. This is a great book-end to the “I shall become a bat” scene, and Miller uses Gordon’s caption boxes to show the people’s reaction to Batman as they cheer for him as a hero and then run away in fear as he calls in a thousand of bats to “distract” the SWAT team. As well as highlighting his cleverness and use of gadgets, the bat attack scene shows Batman’s sheer determination to solve impossible problems that will be a huge part of his crime-fighting career. This sequence is so epic that Christopher Nolan decided to use it in Batman Begins, the definitive film version of Batman’s origin story.

As well acting as an origin story for Batman and Jim Gordon, “Batman Year One” also shows the early days of Selina Kyle as she goes from a Gotham East End prostitute, who is protective of her friends to a masked vigilante like Batman. However, she doesn’t just take down criminals, but steals from them as well. In both writing and art, Mazzucchelli and Miller set up Selina Kyle/Catwoman as a foil to Bruce Wayne/Batman. They both take on an animal symbol when they fight crime, but Selina takes on something she loves and Bruce takes on something he fears. This is show by a great season in the first issue where Selina is covered by cats in her bed. Catwoman also puts on a costume for the thrill of it while Batman wears one because it’s the only thing that will keep him sane. Richmond Lewis gives both Catwoman and Batman a similar tone of grey for their costume, but Mazzucchelli makes Catwoman much more acrobatic as she gleefully leaps across the roofs of Gotham.

In the final chapter of “Batman Year One”, Miller and Mazzucchelli show Batman getting up close and personal with Jefferson Skeevers, a drug dealer, who knows about Flass, Loeb, and the GCPD’s dirty dealings. Batman sneaks into his room once his lawyer leaves and strikes the fear of God into him. It is also Batman at his most primal. He is exorcising his own demons while getting information from this criminal. Mazzucchelli tells the story from the criminal’s POV and shows the pain in his eyes before cutting to black. Miller’s dialogue hints at one of Batman’s deepest fears: bullets. However, he has overcome this fear by jumping in front of them to save people and take down criminals. He can also project these feelings on criminals while painfully extracting compliance from them.

Miller and Mazzucchelli continue to steep Batman in the mythical with the introduction of Carmine “The Roman” Falcone. This is no mere mafioso, but an emperor of crime, who holds court in a house that is a Roman bath on the inside and the Parthenon on the outside. However, Mazzucchelli makes Batman equally as legendary in this basically a splash page where he flies into Falcone’s house while wearing his special harness. This harness is an homage to the flying machine concepts that were found in Leonardo da Vinci’s journals, and Mazzucchelli connects the timelessness of Batman with the timelessness of this drawing. In the dialogue between Falcone and his son Johnny, Miller draws an ironic parallel between Batman and Horatius, a Roman hero who defended a bridge leading to Rome from invaders by himself. This is like Batman, who fights a one-man war on crime for now, but needs help if he really wants to bring big fish like Falcone to justice.

The conclusion of “Batman Year One” isn’t the Dark Knight taking down Carmine Falcone in a blaze of glory, but just he and Jim Gordon becoming allies. From little things like saving an old lady and cat while being chased by the police to helping get Flass to confess to his and Commissioner Loeb’s corruption, Gordon and Batman have progressed from enemies to allies. The last page of “Year One” also shows the ongoing nature of Batman’s crusade against crime. This was just the first skirmish in a full-scale war as Carmine Falcone is still at large and his sister is in town. There is also the first supervillain, The Joker. Because of its corrupt justice system, Batman will always be catching criminals, trying to put them behind bars, and capturing them when they escape. However, Mazzuchelli’s art shows that the ending of “Batman Year One” isn’t grim. Even though Gordon has to deal with a gang war, a costumed supervillain, and marriage counseling, he is smiling on the last page. Gotham is still a dark and dangerous place to live, but Batman and Gordon’s actions in “Year One” offer a glimpse of hope for its citizens.

Evil Dead II at 35: The Dead Get Knocked Down, (But They Get Up Again)