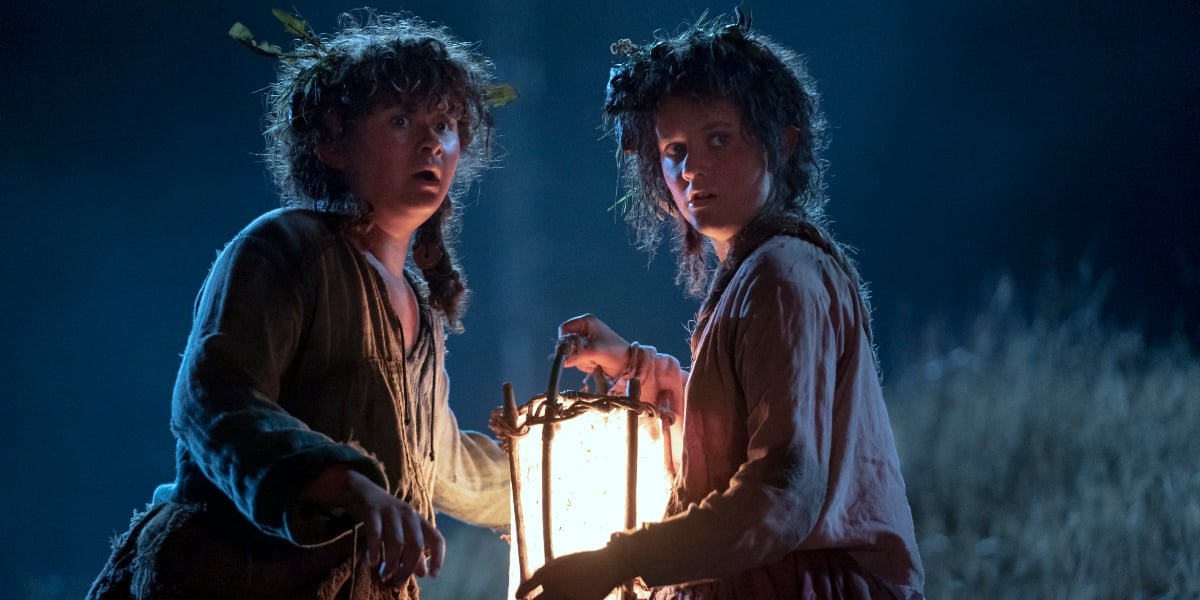 The previous instalment concluded with several key characters making important choices in their lives. Galadriel shunned the opportunity to enter the Grey Havens, Nori’s curiosity got the better of her and sent her off in search of the fiery object that fell from the sky, and Bronwyn and Arondir teamed up to explore nearby lands in the East to unravel the mystery of the sickness ailing local farm animals.

“Adrift” earns its namesake primarily from the predicament the headstrong Galadriel finds herself in. Choosing to delay her entry into the Grey Havens may be seen as bold. The problem is that the Elvin vessel was in the middle of the ocean at the doorstep of their Valhalla. Hopping overboard to protect Middle Earth from an evil that her instincts tell her still lurks is nice, but where does she go from here, literally?

While the title is sufficiently logical, perhaps an even more appropriate one might have been “Forging Friendships” or “Tenuous Alliances.” It is through the Elvin warrior’s sea-bound misadventure that she is re-acquainted with the tensions that exist between her race and that of humans. As fate should ordain, the heroine swims toward a clunky barge made up of flotsam and jetsam by stranded men and women from the Southlands. While the adrift party is (kind of) initially receptive to helping Galadriel, once her delightfully pointy ears are revealed all bets are off. But the stranded souls have no time for racism, not with a gargantuan, worm-like sea beast attacking their pitiful vessel. The transport is trashed even more so, leaving only Galadriel and Halbrand (Charles Vickers) alive. Whether they like it or not, they only have each other now.

Meanwhile, Nori and Poppy discover the nature of the object that fell from the heavens. To their surprise (and probably the audience’s) it is a…human? Maybe. Possibly. The Stranger (Daniel Weyman) is clothed only in a brief, looks worse for wear, sports an obviously well-aged but unkept beard, and can barely communicate with normal words. What he does have are mysterious magical powers. Nori’s self-ordained mission, and by extension Poppy’s, is to care for the Stranger while keeping his existence a secret from the Harfoot community.

Lastly, Elrond and Celebrimbor (Charles Edwards) make their way to the Dwarven mines of Khazad-dûm. The ambitious, politically savvy Elrond plans to convince his old friend, Prince Durin IV (Owain Arthur) to help build the tower to end all towers, complete with the ultimate forge. While the prince’s wife Disa (Sophia Nomvete) is pleased to see Elrond, Durin is miffed that their friendship is not as close as before, the Elf having missed the Dwarf’s marriage and the birth of both children.

As can be discerned from all of the above, “Adrift” predominantly concerns itself with both new acquaintances having to construct ad hoc alliances or out of a desire to be friendly, or old friendships binding once more for, let’s say, politically and economically salient objectives. The only plot thread that diverges from this path is that of Bronwyn and Arondir, who are not as present in this second episode. Suffice it to say that both witness their fair share of Orc villainy to know that something ill is brooding.

What makes “Adrift” compelling is the filmmakers’ continued exploration of the lands and races that populate the Second Age and how they relate to each other. This a reminder that Amazon Studios are playing a long-term game with Rings of Power (ROP). If the company gets its way, it will be a very long-term game, with possibly five years’ worth of adventures. It doesn’t feel as if the second episode must push the overarching plot too quickly, not yet at least. The squabbles between Men and Elves hinted at in the premiere are made abundantly clear in this follow-up.

Granted, when rations are low on a barge stranded at sea, one may hesitate to share, but when Galadriel’s identity is discovered, the humans treat her like the plague. There is obviously significant tension between the two societies. Interestingly enough, “Adrift” offers a glimpse into the bonds that can potentially flourish when group think, or gang mentally is done away with. When the other humans, unfortunately, meet their maker at the hands of the sea beast, the conversations between Galadriel and Halbrand, while not pleasant per se, at least border on civility.

Likewise with the sequences at Khazad-dûm. For Now, ROP makes it clear that there is no such rivalry between Elves and Dwarves as during the Third Age (apologies to those hoping the Elrond-Durin tit-for-tats would be spiritual precursors to Gimli and Legolas). Elrond earns his way into the mines, even though it is by challenging the prince to a contest of rock breaking. Even so, no palpable tension is felt. Grudging respect is the better way to describe the relationship between the two communities. Celebrimbor even expresses great admiration at the Dwarven ingenuity and creativity to mould beauty out of something so ordinary as stone.  Saying the relationships between the races are completely flipped on their heads from the Third Age is a bit extreme, but the nuances are interesting.

Lastly, there are the excitable visits from Nori and Poppy to their bizarre friend, who never seems fully of mind. Little is revealed about the Stranger, except that he perhaps recognizes the Harfoot younglings as benevolent, can stir impressive winds from heady vocal cords, can communicate with fireflies in whispers, and may or may not have something of great importance to tell his caretakers. If only he could speak their language. This relationship differs from the others because it is born out of curiosity and a kind heart. Nori (and especially Poppy) haven’t a clue what exactly they have on their hands, but they are too deep into their personal side project to give up on it now. Furthermore, Nori’s father Largo (Dylan Smith) suffers a terrible foot injury, putting the possibility of immediate migration in doubt. Maybe this will buy Nori more time to learn about the Stranger.

It has already been argued in some reviews that while the first two episodes are impressive accomplishments insofar as the scale of Middle Earth is appropriately grand, ROP lacks some direction. Not that J.A. Bayona isn’t putting in good work, he certainly is. The misgivings have more to do with the fact that after two hours, it remains unclear which shape ROP is taking. Who is the villain? Where will they come from? When will the titular rings show up? Admittedly, at some point, the showrunners will need to start providing answers to those questions. One wonders if this is a case of Amazon being supremely confident that everyone will love the show just because it’s LOTR, thus giving the studio all the time it desires to develop the story of the entire Second Age. We shall see about that.

Given that some of the more important figures from the realm of humans have not been seen or heard from, one assumes that the next instalment will also task itself with more setup. At the very least, “Adrift” provides a small taste of the Orcs. In a pleasant surprise, the creature that Bronwyn and her son Theo (Tyroe Muhafidin) fend off is played by an actor dressed up in ugly makeup and shabby armour. Tolkien fans have probably had their share of completely CGI Orcs for a while.

The Lord of the Rings: The Rings of Power will continue in a week!

-What is the sword shard (if it is that) that Theo has stashed under the floorboards of his home? Gazing at it brings forth unclear imagery of perhaps Sauron. Is it the foul villain’s manner of communicating? A piece of broken armour? Who knows.

-The biggest question: Who is the Stranger? “Adrift” drops enough clues for seasoned LOTR fans to make some guesses. Is the show intentionally leading viewers astray? Are the clues too obvious and the Stranger is really someone else? We’ll have to stay tuned!

-Visiting the mines of Khazad-dûm during its heyday is epic. Significant computer-generated enhancements are part of parcel of how such imaginary places are brought to life, but the effects teams do a wonderful job at making the mines look like the most incredibly well-oiled and even welcoming place to work and live in.

-Shout-out to “Khazad!” and “Dûm!” being a rallying cry for the Dwarves to hype themselves up.

-There are plenty of transitions from region to region via a large map of Middle Earth the camera pans over. It’s an inventive way to get a sense of how distant or close all these places are to one another.

NBC Giving Up Its 10 PM Time Slot: Is This the End of the (Media) World As We Know It?